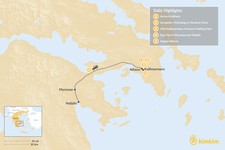 Long dominated by the omnipresent Parthenon, Athens mingles its classical past with a budding art scene and bustling markets. You'll spend five days exploring this city's many cultural treasures and cool neighborhoods—along with day trips to archaeological sites in nearby Mycenae. See why the epicenter of antiquity and philosophy is well worth a trip today.

Start the day early with a full day trip back to a true classic. You may recognize Mycenae from its role in Homer's Iliad: It was home to the famous Helen, whose Mycenean husband King Agamemnon led his people to war when she left him for Paris of Troy. See its Cyclopean walls, whose construction method is still a mystery. They got their name due in part to the belief that only the mythical Cyclops would have been strong enough to lift their boulders.

You'll pass through the Lion Gate to enter the ruins of the city, wandering past the tombs of Aegisthus and Clytaemnestra and the Treasury of Atreus.

You'll go on to Nafplio, one of the prettiest seaport towns in the Peloponnese peninsula and once believed to have been founded by the son of Poseidon. The town was the first capital of the new Greek state after the war of independence in the 1800s. Take a stroll through the old town, where you'll pass statues honoring significant figures from Nafplio's history, Ottoman fountains, and Venetian architecture along the winding streets, topped off by the Bourtzi Castle in the middle of the harbor. Don't miss the climb up 1,000 steps to see the view from the Palamidi Castle.

Discover Athens' heart and soul by exploring six of its neighborhoods,...

Mycenae and Epidaurus Tour on the Peloponnese

Step back in time and combine two of the most impressive archeological...

Take older kids and teens on this two-week itinerary that will get you...

Older kids and teens can enjoy ten days of activities that will acquaint...

Spend a week getting in touch with Greek culture alongside your...

Crete is the largest of the Greek islands, a place rich in history,...
Getting Around Greece

Daniel F.
Georgia, United States
"Just not used to not meeting Dimitris for the whole trip - next time need to give me WARNING about the Hotel in Santorini being Down on the cliff - i was pan..." read more
Traveled to Greece solo in October, 2019
Create your custom-made trip to Greece
Get Started