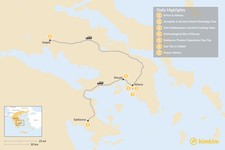 Long dominated by the omnipresent Parthenon, Athens mingles its classical past with a budding art scene and bustling markets. You'll spend seven days exploring this city's many cultural treasures and cool neighborhoods—along with day trips to archaeological sites in nearby Eleusis, Epidaurus, and Delphi. See why the epicenter of antiquity and philosophy is well worth a trip today.

Your main activity for today is a visit to archaeological site at Eleusis located just outside of the city of Athens. These ruins were the site of one the most compelling rituals of the ancient world: an initiation ceremony into the cult of Demeter. So little is known about the ritual that it's still referred to as the Eleusinian Mysteries. Explore the site and see what you can find out!

Schedule your guided tour for whenever suits your schedule, whether you prefer to sleep in late or start early, and return to the city for dinner in the evening. Get a taste of the islands at Kriti restaurant, which specializes in Cretan cuisine.

Take the morning to relax and explore the city at your own pace, perhaps lingering over a coffee and Greek yogurt or pastry.

After the play, you'll head back to Athens for the evening.

Today, you'll seek out the oracle during a day trip to the ruins of Delphi, once home to priestesses of Apollo who Ancient Greeks believed could predict the future. Take a guided tour through this sprawling archaeological site, with stops such as the Treasury of the Athenians, the Temple of Apollo, and expansive theater.

Explore the ruins or venture up an ancient footpath once used by worshippers of the god Pan, who started from the temples of Delphi and proceeded to Corycean Grotto for their religious rites, surrounded by the valley of olive trees and views of the Corinthian Gulf and peaks of the Peloponnese on your way.

Don't skip the neighboring museum, which contains masterpieces such as the Bronze Charioteer and the image of the famous athlete Aghias.