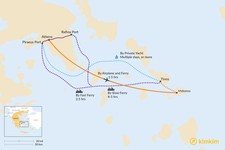 The journey from the Greek capital of Athens to the tiny and picturesque Cycladic island of Tinos is about 100 miles (161 km). Traveling between the city and the island can take just a few hours, and is possible by boat or a combination of airplane and boat. Due to Tinos’ size, it doesn’t have its own airport, as many larger islands do.

The fastest and most economical way to travel from Athens to Tinos is by ferry. There are fast ferries and slow ferries, passenger ferries and ferries for both passengers and vehicles. All are equipped with cafés and bathrooms, with fast ferries arriving to Tinos in fewer than three hours, and slower ones arriving in about five hours. You’ll also pay a little bit extra for those faster ones.

Note that if you purchase a ferry ticket online without a barcode, you’ll probably have to get a paper ticket once you arrive at either the Piraeus Port or Rafina Port in Athens. You can do this approximately 30 to 45 minutes prior to disembarking.

If being on a boat for an extended amount of time isn’t your thing, then you can opt for a plane and ferry combo. Flights leave several times a day from Athens to arrive on the nearby island of Mykonos. After your arrival, you’ll hop on a quick, 20-30-minute ferry from Mykonos to Tinos. Know that the Mykonos airport can get very busy throughout the high season.

Of course, there’s always the most luxurious option: renting your own yacht and taking your sweet time along the glittering waters of the Aegean Sea.

If you'd like to do this route as part of a broader island hopping trip, this 2-week itinerary starts in Athens before heading to Tinos for a cultural tour. Glamorous Mykonos and Santorini are next, before continuing to Crete, where turquoise lagoons and village tours await.

The Greek high travel season extends from June to September and features several daily trips from Athens to Tinos via fast ferry. Golden Star Ferries, SeaJets, and Fast Ferries disembark from the Rafina Port in Athens, and include economy seats, airplane seats, or VIP seats. These ferries further offer two, three, and four-bed first-class cabins, along with cabins with bathrooms and showers. All boats offer cafés for mid-ride eating and drinking, and several accommodate vehicles. Note that these frequent travel times will deplete quickly once the high season ends—to around once or twice per day. Check accordingly!

The Greek high travel season allows for two vessels from the Athens Piraeus Port per day, along with several conventional-speed ferries from Rafina Port. The conventional ferries are a bit cheaper than the faster ferries, with economy seats, airplane-like seats, business class seats, and VIP seats. As with the fast ferries, the conventional ferries feature first-class cabins, along with more deluxe cabins with bathrooms and showers. All ferries offer an on-board café, and many allow for pets and vehicles.

By Airplane and Ferry

During high season, Athens International Airport offers approximately five non-stop flights to the Mykonos airport per day. The Mykonos International Airport is located about 3 miles (5 km) from Mykonos Port and is easily reached via a 15-minute taxi ride. A Mykonos bus service also operates throughout the high season, but keep in mind that the buses are frequently late and the schedule changes year-to-year.

From Mykonos Port, it's a 30-minute ferry from Tinos, with four different ferry companies, including Blue Star, Fast Ferries, Seajets, and Golden Star, offering around 10 trips per day at various times. All ferries feature economy, airplane-like, and VIP seats, along with cabins. They also feature on-board cafés, and can accommodate vehicles if you’d rather rent a car in Mykonos prior to heading to Tinos.

If luxury is what you’re after, charter your own yacht. Boat options suit between eight and 12 guests and come with their own crew. For more, see this article on yacht trips in Greece.

A
Adam B.
North Carolina, United States
"My wife and I are SO happy that we used Kimkim to help plan a 2 week honeymoon to Athens, Mykonos, Santorini, and Crete, because the trip was absolutely incr..." read more
Traveled to Greece as a couple in May, 2022