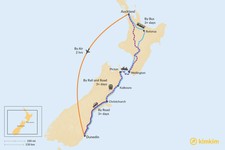 Auckland and Dunedin are at polar opposite ends of New Zealand: Auckland is near the top of the North Island, while Dunedin is near the bottom of the South Island. They're 888 miles (1430 kms) apart, and the easiest way to travel between them is with a direct flight. You can also make it a scenic, multi-day road trip. Here's more on how to get from Auckland to Dunedin.

Given the distance between Auckland and Dunedin and the fact that they're on different islands, flying is the quickest and most convenient way of traveling between them. Several direct flights make the trip every day.

Few travelers would want to make the overland journey between Auckland and Dunedin all in one go, but the north-south journey does make for a great New Zealand road trip. There are many possible routes you could take, stopping at points of interest throughout the North and South Islands.

The most direct road journey between Auckland and Dunedin heads south on State Highway (SH) 1 through Hamilton and Matamata (of Hobbiton fame), and skirts Lake Taupo and the Tongariro National Park, before reaching Wellington, at the bottom of the North Island. If driven in one go, it takes about eight hours to get from Auckland to Wellington. The journey to Wellington can also be taken though the west of the North Island, via New Plymouth and Mount Taranaki, east via Rotorua and Napier, or even further east via Tauranga and Gisborne.

Whichever route you take it's necessary to stop in Wellington, probably overnight, because the North and South Islands are separated by the Cook Strait. Take the vehicle ferry to Picton, at the top of the South Island. Ferries leave several times a day from Wellington, from the early hours of the morning through to the late evening. The crossing takes about three hours. It's beautiful on a good day, especially as it sails through the Marlborough Sounds. However, it can also be rough when there's been bad weather, and is sometimes canceled if the sea is too rough.

At Picton, continue driving south. The most direct route to Dunedin follows SH 1 through Blenheim and Kaikoura, along the east coast of the upper South Island, and then through Christchurch, Timaru, and Moeraki before finally reaching Dunedin. Driving directly, the journey from Picton to Dunedin takes about nine hours, but Kaikoura, Christchurch, and Moeraki are good places to break the journey.

A (much) longer way to travel south through the South Island to Dunedin is to head west from Picton to Nelson, then along the West Coast through Westport, Greymouth, Franz Josef, and Fox Glacier, crossing the mountains at the Haast Pass to Queenstown, and then east across  to Dunedin.

The simplest route outlined above (Auckland to Wellington through the Central North Island, and then Picton to Dunedin along the east coast of the South Island) can also be traveled by long-distance bus. These leave Auckland in the early morning or in the evening. You may need to book different legs of the journey separately. As when self-driving, there are many worthwhile stops along the way so it's best not to do the full Auckland to Dunedin bus trip in one go.

By Rail and Road

The North Island portion of the above journey can also be made by train. The Northern Explorer leaves Auckland three times a week, traveling through the central North Island and arriving in Wellington about 12 hours later. Make your own arrangements to cross to Picton. From Picton, you can take another train to Christchurch (the Coastal Pacific, which runs daily), or rent a car and drive the rest of the way south to Dunedin. Alternatively, you can rent a car in Picton and take one of the two routes outlined above to Dunedin, either going west to Nelson and then south along the West Coast, or going directly south along the east coast to Dunedin.

How to Get from Auckland to Christchurch

The Tongariro National Park is about 180 miles (290 km) north of...
Getting Around New Zealand

Highlights of New Zealand: From North to South - 15 Days

Perfect for first-timers, this 13-day itinerary covers an epic variety...

From Auckland to Taupo, this six-day itinerary presents the highlights...

Experience the wilderness and wildlife of New Zealand's South Island on...

Experience the highlights of New Zealand's North Island on this 8-day...

Enjoy an eventful five days in Auckland on this active itinerary. Upon...

K
Karenr R.
Australia
"Phoebe and her team at Zip Line were amazing. Phil on the jet boat at Lake Taupo was particularly good with the younger children. The bus trip to the north o..." read more
Traveled to New Zealand as a group in January, 2023

Rebecca B.
Idaho, United States
"We enjoyed our trip of a lifetime thanks to the help of Christina. She listened and planned a trip that was perfect for our preferences and also the pace of..." read more
Traveled to New Zealand as a couple in December, 2022
N
Nancy P.
California, United States
"The entire trip was amazing. It was such a wonderful experience to have everything all planned out in what in my opinion is the most beautiful country in th..." read more
Traveled to New Zealand as a family in November, 2022

Jeanette R.
Missouri, United States
"Steve our guide for blue mountains was great very knowledgeable and friendly John who guided us to 12 apostles was funny, native of area with a wealth of i..." read more
Traveled to New Zealand as a group in September, 2022

Court D.
California, United States
"Chelsea put together a fantastic itinerary for the North Island; the lodgings were fantastic, and the agenda was a nice blend of activities and downtime to e..." read more
Traveled to New Zealand solo in September, 2022
K
Kate B.
Colorado, United States
"Nichole was incredibly informative, gracious, and flexible. We had some last minute challenges during our visit (unrelated to the planning) and Nichole had ..." read more
Traveled to New Zealand solo in July, 2022
Create your custom-made trip to New Zealand
Get Started