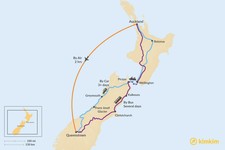 Auckland, near the top of the North Island, and Queenstown, near the bottom of the South Island, are about 960 miles (1550 km) apart. The quickest and easiest way of traveling between the two places is to fly, but there are other options for travelers who aren't in a hurry and want to take the scenic route.

Many flights make the trip each day between Auckland and Queenstown. This is the most convenient way to get between the two cities. Flights depart from the domestic terminal of Auckland Airport. On arrival in Queenstown, shuttle buses and taxis connect Queenstown Airport with the town, or you can rent a car directly from the airport.

Traveling between Auckland and Queenstown by car is a good option if you want to go on a road trip through New Zealand's two main islands. While the trip can be made in three days of solid driving, most travelers prefer to take their time, spreading the trip over a minimum of two weeks, but ideally longer.

There are many things to see and do along the way, and potential routes. The most straightforward route is to get on State Highway (SH) 1 from Auckland and head to Wellington, stopping at the Tongariro National Park en route. From Wellington, take the vehicle ferry across the Cook Strait to Picton, at the top of the South Island (book tickets as far in advance as possible).

Once you reach the South Island, you have two options: drive from Picton down the east coast, via Kaikoura and Christchurch, and then turn west inland, through Twizel and Tekapo in the Mount Cook area, and finally arrive in Queenstown. Or, from Picton drive west to Nelson and then south down the West Coast, passing through Westport, Greymouth, Hokitika, Franz Josef, Fox Glacier, over the Haast Pass, through Wanaka, and finally to Queenstown. Both of these routes are fantastic road trips, and shouldn't be hurried.

If driving through the Central Plateau in the North Island and the mountainous areas of the South Island in the winter, be sure to check road and weather conditions before setting out. Roads in these areas are often closed due to snowfall, even in late autumn and spring, and you may have to take a longer way around. And, while most of New Zealand's roads are in decent condition, some of the mountainous roads can be challenging for less-experienced drivers.

While it's not possible to travel directly from Auckland to Queenstown by bus, you can combine long-distance bus services through the North and South Islands. As with the suggested driving itinerary above, making the trip by bus is best spread over several weeks, stopping at points of attraction along the way.

To make this trip a bit faster, go straight through from Auckland to Wellington on day or overnight buses, cross the Cook Strait on a ferry, and then travel directly from Picton to Christchurch. From Christchurch you'll need to change buses to continue the journey to Queenstown. If you wanted to go along the West Coast from Picton, you'd need to change buses in Franz Josef.

How to Get from Wellington to Taranaki

Mount Taranaki, in the west of New Zealand's North Island, is about 200...
Getting Around New Zealand

The 12-day itinerary includes some of the South Island's greatest...

This two-week crossover trip takes you from New Zealand to Australia...

On this short-yet-eventful tour of New Zealand, experience both the city...

Jessica T.
Australia
"Thanks so much to Valentin for planning our amazing trip. Everything was so well organised and our trip flowed seamlessly. Our trip incorporated everything w..." read more
Traveled to New Zealand as a couple in June, 2019
Plan your trip to New Zealand
Customize your trip with help from a local travel specialist
Plan Your Trip