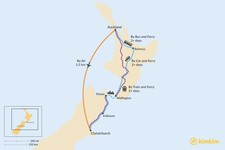 Auckland and Christchurch are about 620 miles (1000 kms) apart. They're at opposite ends of the country—Auckland towards the top of the North Island, and Christchurch about half-way down the South Island—so the quickest way to get from Auckland to Christchurch is to fly. There are other options, too, for travelers who want to make a journey out of it.

Several flights travel from Auckland to Christchurch every day. They leave from the domestic terminal at Auckland Airport. As they only take around an hour and a half to travel more than 600 miles, flying is by far the easiest way of traveling between Auckland and Christchurch.

By Car and Ferry

Many travelers to New Zealand like the flexibility of renting a car. Driving between Auckland and Christchurch is not the quickest way to get there, but few travelers would make the journey in one go, opting to stop at many points of interest along the way, including the Tongariro National Park, Taupo/Rotorua, Wellington, Picton, and Kaikoura.

To drive between Auckland and Christchurch, you'll first need to get to Wellington. The quickest route heads south on State Highway (SH) 1 through Hamilton and Matamata (of Hobbiton fame), and skirts Lake Taupo and the Tongariro National Park. This route takes about eight hours, directly. The journey can also be taken though the west of the North Island, via New Plymouth and Mount Taranaki, east via Rotorua and Napier, or even further east via Tauranga and Gisborne.

Once you've reached Wellington, you'll need to take the InterIslander Ferry across the Cook Strait to Picton, at the top of the South Island. Ferries leave several times a day from the Wellington InterIslander Ferry Terminal, just north of the central city, from the early hours of the morning through to the late evening. The crossing takes about three hours. It's extremely scenic on a good day, especially as it sails through the Marlborough Sounds. However, it can also be rough when there's been bad weather, and is sometimes canceled if the sea is too rough.

At Picton, continue driving south. The most direct route follows SH 1 through Blenheim and Kaikoura, along the east coast of the upper South Island. Driving directly, the journey from Picton takes about five hours, but the popular whale-watching town of Kaikoura is worth at least a day.

A longer way to reach Christchurch from Picton is to head west to Nelson on SH 6, then along the West Coast between Westport and Greymouth, across Arthur's Pass and the mountains, and east across the Canterbury Plains to Christchurch. This is a much longer journey than taking SH 1 from Picton, but is worthwhile if you stop at many places along the way.

By Bus and Ferry

The simplest route outlined above (Auckland to Wellington through the Central North Island, and then Picton to Christchurch along the east coast of the upper South Island) can also be traveled by long-distance bus. These leave Auckland in the early morning or in the evening, for an overnight service. You can either book individual legs of the trip so you can spend time in places of interest en route, or travel straight through. If booking straight through from Auckland to Christchurch, tickets usually include the InterIslander Ferry between the islands.

By Train and Ferry

New Zealand's passenger rail network is not extensive, but the journeys that are possible are extremely scenic. Advantages of taking the train are that it's more environmentally friendly than driving or flying, and you can enjoy the views without having to watch the road. Plus, the trains are more spacious than buses, and are equipped with bathrooms and a dining cart.

Both of these train journeys allow stopovers, so you don't have to make each leg of the journey straight through in one day, but stop at places on the way.

The Tongariro National Park is about 180 miles (290 km) north of...
Getting Around New Zealand

Highlights of New Zealand: From North to South - 15 Days

Perfect for first-timers, this 13-day itinerary covers an epic variety...

From Auckland to Taupo, this six-day itinerary presents the highlights...

Experience the wilderness and wildlife of New Zealand's South Island on...

This unforgettable 21-day road trip carves a figure-eight through New...

Experience the highlights of New Zealand's North Island on this 8-day...

N
Nancy P.
California, United States
"The entire trip was amazing. It was such a wonderful experience to have everything all planned out in what in my opinion is the most beautiful country in th..." read more
Traveled to New Zealand as a family in November, 2022

Jeanette R.
Missouri, United States
"Steve our guide for blue mountains was great very knowledgeable and friendly John who guided us to 12 apostles was funny, native of area with a wealth of i..." read more
Traveled to New Zealand as a group in September, 2022