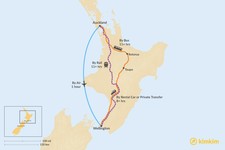 Auckland and Wellington are at opposite ends of New Zealand's North Island, about 400 miles (640 kilometers) apart. Getting between the two major cities is very straightforward, and there are many options. Here's how to get from Auckland to Wellington.

Many flights operate between Auckland and Wellington each day and take about an hour. This is the easiest option for travelers needing to save time. Flights leave from the domestic terminal of Auckland Airport, which is connected by shuttle bus and marked walkway to the international terminal. Landing in Wellington can often be a turbulent experience, due to Wellington's infamous wind, but not always.

Many travelers to New Zealand like to rent a car, to be able to visit out-of-the-way places that can't be reached any other way. Driving between Auckland and Wellington takes upwards of eight hours if it's done in a single trip, but there are many worthwhile places to stop on the way. If you're traveling through New Zealand for the first time, it makes sense to make a multi-day road trip out of the drive.

If you'd rather just reach your destination, get on State Highway 1 and keep driving until you can't go any further. The road passes through Hamilton and Matamata (of Hobbiton fame), and skirts Lake Taupo and the Tongariro National Park. If you don't want or need to take the fastest route through the middle of the North Island, you could choose to go west, via New Plymouth and Mount Taranaki, east via Rotorua and Napier, or even further east via Tauranga and Gisborne.

A scenic rail journey makes the trip between Auckland and Wellington a few times a week, leaving early in the morning and arriving in the evening. Rail track delays can occur leaving Auckland and entering Wellington. It's a fun experience for rail enthusiasts as well as travelers who aren't short on time.

You'll pass through the Central Plateau in the middle of the North Island, and be treated to wonderful views of Mounts Tongariro, Ruapehu, and Ngauruhoe, as well as the dramatic scenery of the King Country and Kapiti Coast. The trains are equipped with a food and beverage carriage and an open viewing carriage, where you can feel the wind in your face. The restroom facilities are also decent, and there's plenty of room in the seating area. It's more expensive than taking the bus, but also more comfortable.

Several private bus companies offer services between Auckland and Wellington. They don't take the most direct route, as they go via Rotorua, but this is still quite a quick way of getting there. Buses make reasonably frequent comfort and meal stops.

Lake Tekapo sits right in the center of New Zealand's South Island. It's...
Getting Around New Zealand

This two-week crossover trip takes you from New Zealand to Australia...

On this short-yet-eventful tour of New Zealand, experience both the city...

Explore the highlights of New Zealand's North and South Islands on this...

On this two-week journey to Australia and New Zealand, adventure through...