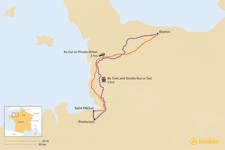 Bayeux and Mont-Saint-Michel are two of the most popular places to visit in France's Normandy region, and they are just 77 miles (125 km) apart. It is easy to get from Bayeux to Mont-Saint-Michel by train or car, perhaps as part of a 5-day Normandy coast excursion or as stops on a longer exploration of Normandy, Brittany, and the Loire Valley.

If you prefer to drive or hire a private driver to take you from Bayeux to Mont-Saint-Michel, the journey should take just over two hours without traffic. Consider stopping in Avranches to see the Scriptorial d'Avranches, a museum filled with manuscripts from Mont-Saint-Michel; the General Patton Memorial and Avranches' other World War II memorials; and the Jardin des Plantes (Botanical Garden), which offers beautiful views of the Mont.

Another recommended stop, especially if you prefer avoiding France's autoroutes (toll highways) is Coutances. Here you can visit a Gothic cathedral and Coutances' Jardin des Plantes. Château de Gratot, a ruined medieval castle that dates back to 1251 CE, is just a few kilometers from Coutances.

By Train and Shuttle Bus or Taxi

TER trains depart Bayeux several times daily for Pontorson. From Pontorson's train station, you can take a shuttle bus to Mont-Saint-Michel's coach terminus, which is a short walk from the entrance to the village. The shuttle schedule coincides with the train schedule, so you will not have to wait long for a shuttle.

You can take a taxi instead of the shuttle, but the taxi will take you to the Mont-Saint-Michel tourist information center, not to the coach terminus. From there you can take the free Passeur coach, walk 1.5 miles (2.5 kilometers), or hire a horse-drawn carriage to carry you to the entrance to Mont-Saint-Michel.

Be sure to check the shuttle bus schedule as you plan your trip. On certain high tide days ("spring tides"), the shuttle bus will take you to the tourist information center rather than to the coach terminus near the Mont. From there, your options for getting to Mont-Saint-Michel are as described above.

Marseille, France's second-largest city, is 410 miles (660 km) away from...
Getting Around France

This epic trip loops around three beloved regions in France with a nice...

History buffs will love this Northern France itinerary, which spans an...

You will be delighted by this trip in Paris, Normandy, Bordeaux and the...

Spend two weeks exploring the highlights of western France, from the...

Spend sixteen days exploring everything western France has to offer,...

View art in Paris, enjoy beaches in Normandy, and taste oysters in...

If spending eighteen days driving from France's capital down the western...

G
Gordon G.
Louisiana, United States
"Valentine with Kimkim was professional and wonderful to work with as well as the individuals she had set up for our private transfers and lodgings. The lodg..." read more
Traveled to France as a family in November, 2021

Sara J.
Germany
"This was a great trip! Isabelle was able to pull this together for us very last minute and she did not disappoint! We loved the itinerary and thought it the..." read more
Traveled to France as a couple in August, 2021
M
Mary R.
Georgia, United States
"Overall this was a wonderful trip, and we were very pleased with our accommodations at Hotel a la Villa des Artistes in the Montparnasse area. That Les Jard..." read more
Traveled to France as a family in February, 2020
L
Lanier M.
North Carolina, United States
"Our trip was Amazing! Simon was so responsive, both before AND during our trip. I've traveled a lot but never used a travel agent before and what a differenc..." read more
Traveled to France as a couple in February, 2020
Create your custom-made trip to France
Get Started