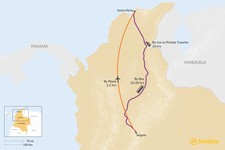 Santa Marta is 594 miles (956 km) away from Bogotá, making flying the most convenient travel option. A flight to Santa Marta takes about one hour and thirty minutes via a direct flight. Going by bus is also an option—the route takes significantly longer, usually over 20 hours from Bogotá to Santa Marta. Private transfers are recommended over self-driving, unless you are used to driving mountainous roads and have access to a 4X4 utility vehicle.

If you don’t want to worry about travel logistics, consider this 10-day itinerary. This tour offers the perfect combination for city dwellers and nature lovers alike. You’ll spend time in the most four popular Colombian cities, including Bogotá, Medellín, Santa Marta, and Cartagena. Each city has its own distinct culture and flavor.  To balance it out, you’ll also visit a coffee farm, hike through a rainforest, and spend time on the beach while visiting the stunning beaches and rainforests of Tayrona National Park.

Your best option from Bogotá to Santa Marta is to fly. Most people prefer to fly over taking the bus since the bus usually takes over 20 hours. Several non-stop domestic direct flights leave from El Dorado International (BOG) Airport in Bogotá to Santa Marta. Direct flights are around an hour and a half in duration. Simón Bolívar International Airport (SMR) is the airport serving Santa Marta. The airport is located 10 miles (16 km) south of downtown Santa Marta. Taxis are readily available for hire in the ground transportation area of the airport. There are no meters, so negotiate a fare with the driver before starting your journey.

Going overland from Bogotá to Santa Marta takes over 15 hours—and is an expensive option at this distance. Having a car and driver gives you the freedom to explore this route. You can certainly make the drive in one day, though many opt to take their time, spending the night at one of the colonial towns along the way to see attractions outside of Bogotá.

Consider a stop in the riverside town of Honda found a few hours outside of Bogotá. This quaint town has traditional charms such as cobblestone streets, lovely markets, and churches that are worth a look, such as El Alto Rosario. Additionally, this town features many colonial buildings and bridges. It’s a sought-after location by many travels and locals that want to escape to somewhere quieter than Bogota for a few days.

If you want to ride the bus from anywhere from 16 to 20 hours, you’ll want to depart from Terminal de transporte de Bogotá Salitre. This bus station is about 6 miles (10 km) northwest of the Candelaria neighborhood. Buses usually arrive in Santa Marta anywhere from 17 to 22 hours, depending on road conditions. Santa Marta’s bus terminal is outside the historic center. It’s about a 15-minute taxi ride from there into the city center.

Check off three unforgettable cities on this whirlwind 10-day tour...

Grace G.
Minnesota, United States
"So glad we used this service! COVID had really taken a lot of the fun out of planning trips since there was so much uncertainty and so many restrictions to ..." read more
Traveled to Colombia as a couple in December, 2021

Jamie L.
Michigan, United States
"My 16 year old daughter & I took a trip to Cartagena, Colombia this past summer. I was a little nervous about a trip like this with just us , but the help p..." read more
Traveled to Colombia as a couple in June, 2021

Simon K.
New Jersey, United States
" In one word "EXCELANT". I would like to say as a traveling person, the trip that we had to Colombia was more than what we expected. Other than the beautifu..." read more
Traveled to Colombia as a group in October, 2021
Plan your trip to Colombia
Customize your trip with help from a local travel specialist
Plan Your Trip