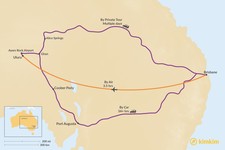 Uluru, the big red rock right in the middle of Australia, is 1,364 miles (2,195 km) from Brisbane. But, because it's one of Australia's most popular travel destinations, it's relatively easy to get to. A direct flight from Brisbane to Ayers Rock Airport takes about three hours, or you can take a multi-day outback road trip that passes through some of Australia's beautiful national parks.

Duration: 3.5 hours, more with a layover in Melbourne or Sydney

Direct flights between Brisbane and Uluru only take around three hours. There are between one and three direct daily flights each day, and many more that transit somewhere, such as Melbourne or Sydney. Even if you can't get a direct flight, most travelers will still find flying the most convenient option as it's the only way to get there in one day. Small Ayers Rock Airport (also called Connellan Airport) is near Yulara, a short drive from Uluru. Flights over the outback can be very impressive, and you might be amazed to see that it's not all just barren sandy landscape.

While Brisbane and Uluru are 'only' 1,364 miles (2,195 km) apart, the overland route is much longer, at 1,864 miles (3000 km). If driving directly, this would take around 34 hours, but this isn't recommended. Aside from being safer and more comfortable, breaking the journey up will allow you to experience some of the outback's greatest landscapes and features. Many travelers to Australia like to get around by car, despite this being slow.

There are two main ways that you can get from Brisbane to Uluru by road, and it's recommended that you stick to one of these routes rather than take any smaller, seriously remote roads through the outback of Queensland, New South Wales, South Australia, and the Northern Territory. Getting lost or breaking down can be life-threatening on the more remote roads.

A northern route heads northwest from Brisbane and cuts through central Queensland, entering the Northern Territory east of Alice Springs, and passes through the thriving outback city before arriving at Uluru.

The second, southern route from Brisbane is probably of more interest to most travelers, and is only slightly longer than the northern route. From Brisbane, head southwest through central New South Wales and into South Australia. Pass through Port Augusta and then north-west through an area with lots of lakes, some of which are national parks. Head north through the opal-mining town of Coober Pedy, and into the Northern Territory south of Ghan. This route doesn't take you through Alice Springs, but instead turns west to Uluru at Ghan.

The roads to Uluru are in pretty good condition because it's a common road-trip route, but it's important to have emergency supplies, such as water and a spare tire, when driving through the outback.

Note that this road trip could, technically, be done by bus. But, it's not possible to get a direct bus from Brisbane and Uluru, or even Brisbane and Alice Springs, the nearest city to Uluru. To make this trip by bus you'd need to patch together many separate legs of the journey, which would take a long time and go a very round-about way. Long-distance buses in Australia are not cheap, so there is no real benefit in trying to do this overland trip by bus. If you don't want to drive yourself but don't have the budget for a private tour, just fly.

A private tour can be a great way to get to Uluru. As well as being a mode of transport, on a private tour you'll have a knowledgeable guide accompanying you, and will get to see other places. It's possible to start a tour to Uluru from many places around Australia, including Brisbane. Learn more

J
Juel B.
Hong Kong SAR China
"Liz planned a perfect getaway, taking in consideration our timetable and price range. She also encouraged us to try new things like the Sidney Bridgeclimb ..." read more
Traveled to Australia as a couple in April, 2022

Rebecca H.
United States
"Had a wonderful time , missed flight due to weather and Kim Kim team was right on it . No way we could of experience all the things we did in a short time w..." read more
Traveled to Australia as a family in August, 2019
T
Timothy D.
Michigan, United States
"Lisa and the kimkim team were tremendous to work with. Our 10 day journey around Australia was perfect, the kimkim business model works! Lisa built a detai..." read more
Traveled to Australia as a family in May, 2019
Plan your trip to Australia
Customize your trip with help from a local travel specialist
Plan Your Trip