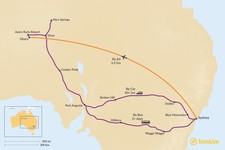 Smack dab in the middle of Australia, Uluru is far from almost everywhere else. The closest town is Alice Springs, which is still more than 200 miles (330 km) away, to the north-east. But, as Uluru is one of Australia's most popular sights, it's easy to get there from Sydney, around 1,700 miles (2,800 km) to the south-east.

Given Australia's enormous size and the many hundreds of miles between Uluru and Sydney, many travelers opt to fly. If you're on a short visit to Australia, this is really the only option worth considering.

Small Ayers Rock Airport (also called Connellan Airport) is near Yulara, a short drive from Uluru. Daily flights run from Sydney, and while some are direct, others transit via Alice Springs. Either way, it's an impressive flight as you'll get a view of Uluru on the way in, which will surely get you excited for further exploration.

If you're up for a real Australian adventure, road tripping to Uluru will surely be the journey of a lifetime. Driving non-stop between Sydney and Uluru is not recommended, because not only would that be long and exhausting, there are also many interesting and beautiful things to stop and see along the way.

The most direct route between Sydney and Uluru is a well-sealed road that's reasonably easy to drive; you don't need a four-wheel drive for this. But, ensure that your car is in good condition and you have some emergency supplies (like water) as some parts are very remote.

From Sydney you can either take a more northern route through New South Wales that goes via the Blue Mountains, Dubbo, and Broken Hill, or a more southern route that skirts the Australian Capital Territory, Wagga Wagga, and Mildura. Both routes converge at Port Augusta, north of Adelaide, and head north through the outback of South Australia to Uluru.

It's not possible to go directly between Sydney and Uluru by bus. But, you can get one bus to Alice Springs—about 43 hours—and then connect to another bus to Uluru—about 5-6 hours. As with the self-driving route, it would be best to divide this trip into smaller sections and stop at points of interest along the way, or at the very least spend a few days in Alice Springs before continuing to Uluru.

If you're on a generous budget, a private tour can be a great way to get to Uluru, as it will combine transport with a knowledgeable guide and other activities and destinations. It's possible to start a tour to Uluru from Sydney, which may go overland or require flying. There are tours to suit all kinds of interests and time frames.

Spend a week in three of Australia's eventful regions—Sydney, Uluru, and...