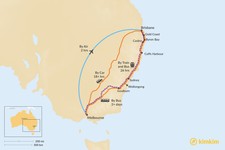 Melbourne and Brisbane are two of Australia's largest cities in the east, and it's easy to travel the 1040 miles (1674 km) between them. Take a two-hour direct flight, or make it into a road trip—you can cut through central Victoria and New South Wales or take a somewhat longer (and very scenic) coastal route. Train and bus options are also available.

Many direct flights travel between Melbourne and Brisbane every day. It's a short flight, at just over two hours. This is by far the easiest and quickest method of traveling between the two cities, and travelers short on time should take this option.

The quickest route between Melbourne and Brisbane takes about 18 hours and cuts a path through central Victoria and New South Wales. However, a slightly longer coastal route (21 hours) would be of more interest to most travelers. This heads east out of Melbourne and up through the Australian Capital Territory (Canberra), through Sydney, and up along the coast, via Newcastle, Port Macquarie, Coffs Harbour, and Byron Bay. This is much more scenic than the inland route.

Unless you're in a real hurry (and in which case, you should fly), don't try to do this road trip in one go. It's much better spread out over several days, or a few weeks, as there are so many points of interest along the way.

The above overland journey can also be taken by bus. However, you'll have to stop at various places en route (particularly Canberra and Sydney) and may even need to change services or wait several hours, depending on the company you're traveling with.

By Train and Bus

Although you can't travel directly between Melbourne and Brisbane by train, you can combine different sections to get most of the way from Melbourne to Brisbane. The first leg requires getting from Melbourne to Sydney, which takes around 11 hours. On the second leg, take a train from Sydney to Casino, which takes about 11.5 hours. You can't go all the way to Brisbane on this train, but Casino is about a 2-3 hour bus ride away. This journey would be best if you plan to spend a few days in Sydney on the way between Melbourne and Brisbane.