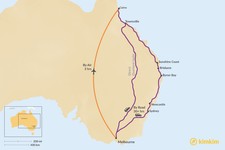 Melbourne, on Australia's south-eastern coast, and Cairns, in tropical Northern Queensland, are separated by 1828 miles (2943 km). But, it's easy to get between these two very different cities. Here's how to get from Melbourne to Cairns.

There are several non-stop flights each day between Melbourne and Cairns, run by multiple airlines. This is by far the quickest and easiest way to get between the two cities, and is the only option for travelers short on time.

It would take more than 30 hours to drive directly between Melbourne and Cairns, but it's not advisable to do it in one go. Spread over a few weeks, a road trip between the two cities is a great way to experience the diversity of Australia's climate, landscape, and cultures.

A slightly longer route up the coast would be of much more interest to most travelers, as it passes through some of Australia's most vibrant and beautiful cities, beaches, and other points of attraction. Instead of heading north from Melbourne, head east along the southern coast of Victoria. Then, head up the coast of New South Wales, through Sydney, the Central Coast, Newcastle, Byron Bay, and into Queensland, passing through the Gold Coast, Brisbane, the Sunshine Coast, Mackay, Airlie Beach (jumping-off point for the Whitsundays), Townsville, and finally arriving in Cairns. All of these places would be worth several days' exploration each, but unless you have months to spend road tripping through Australia, pick a handful of places that interest you most and that break the journey at the best points, and focus on them.