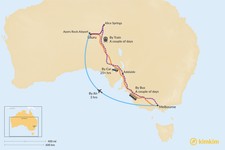 Uluru sits right in the center of Australia, while Melbourne is 1430 miles (2310 km) away in the south-east of the country. But, because Uluru is one of Australia's most iconic attractions, it's easy to get to from Melbourne. Here's how.

Flying is the quickest and easiest way of getting from Melbourne to Uluru. Daily flights run between Melbourne and the small Ayers Rock Airport (also called Connellan Airport) near Yulara, a short drive from Uluru.

Alternatively, there are more flights to Alice Springs, the nearest town to Uluru. While Alice is still a five-hour drive from Uluru, there are connecting flights, or it's worth spending some time there first before continuing on to Uluru.

Driving directly from Melbourne to Uluru takes about 25 hours, but it's highly recommended to break the journey up at many places along the way. Despite the distance, many people do like to drive from Melbourne to Uluru as it's a great way to explore Australia's vast landscape. Plus, the road is in good shape, so this is a good way to experience the outback without having to tackle some difficult roads.

There are two routes from Melbourne to Uluru, but both take about the same amount of time, and pass through similar country. The first heads north-west from Melbourne and passes through Bendigo and Mildura, whereas the other takes a different north-western route through Ballarat and Adelaide (although you can skirt Adelaide city if you don't want to go through it). Both routes converge at Port Pirie, north of Adelaide. The route via Adelaide is probably more interesting to most travelers. After Port Pirie the road passes the many lakes of South Australia and the outback opal mining town of Coober Pedy, before entering the Northern Territory.

Although it's not possible to go directly from Melbourne to Uluru by bus, you can do it in a couple of separate legs. First take a bus from Melbourne to Adelaide, then transfer to another to Alice Springs, and finally from Alice to Uluru. Both Adelaide and Alice are worth at least a couple of days' exploration each, so there's no need to make the trip in one go unless you're in a hurry—and if that's the case you'd be better off flying.

Similarly, no direct trains run between Melbourne and Uluru, but travelers wanting to go overland while minimizing the need for buses or rental cars can make train travel work. The Overland train runs from Melbourne to Adelaide twice a week, and takes about 10 hours. After at least one night in Adelaide, catch The Ghan to Alice Springs (the service continues all the way to Darwin), which takes a couple of days. From Alice you can take a bus, a tour, or rent a car to get the rest of the way to Uluru.

Although taking the train is expensive, it's a highly worthwhile trip if your budget allows. It's a whole experience rather than just a mode of transportation, and The Ghan in particular is said to be one of Australia's best journeys. Plus, it's a great way of seeing the changing landscapes of South Australia and the Northern Territory without having to drive or take a much less comfortable bus.

If you're on a generous budget, a private tour can be a great way to get to Uluru. A private tour will combine transport with a knowledgeable guide and other activities and destinations. It's possible to start a tour to Uluru from many places around Australia, including Melbourne.