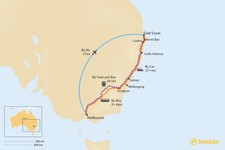 Melbourne, the capital of Victoria, and the Gold Coast in southern Queensland, are 1076 miles (1733 km) apart, but it's quite easy to travel between them. Take a quick flight from Melbourne to Brisbane, or take a worthwhile multi-day road trip.

Although driving isn't the fastest way of getting from Melbourne to the Gold Coast, many travelers like to drive around Australia as there are many interesting things to see when traveling by road. Spend at least a few days making this trip, preferably a couple of weeks.

There are a couple of route options when driving between Melbourne and the Gold Coast, but both converge at Goulburn, north of Canberra. The slightly quicker route (17 hours) heads north out of Melbourne and skirts the Alpine National Park and Kosciuszko National Park to the north. The second route is a bit longer (20 hours) and heads east out of Melbourne, skirting those parks to the south, and passing through the Australian Capital Territory (Canberra). Both route options then head north up the coast past Wollongong, Sydney, the Central Coast, Newcastle, Port Macquarie, Coffs Harbour, Byron Bay, and finally arriving on the Gold Coast, just over the New South Wales-Queensland border.

The above overland journey can also be taken by bus. However, you'll have to stop at various places en route, such as Canberra, Sydney, and/or Brisbane, and may even need to change services or wait several hours.

By Train and Bus

Although you can't travel directly between Melbourne and the Gold Coast by train, you can get most of the way. The first leg requires getting from Melbourne to Sydney, which takes around 11 hours. It's advisable to spend at least a couple of days exploring Sydney. On the second leg, take a train from Sydney to Casino, which takes about 11.5 hours. Casino is about a two-hour drive from the Gold Coast and you can get a bus the rest of the way.