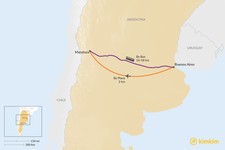 Close to the Chilean border, Mendoza is located 650 miles (1,050 km) from Buenos Aires in a region known for producing most of Argentina's wine. The easiest way to travel between Buenos Aires and Mendoza is to book a flight from Aeroparque (AEP), but there are also long-distance buses that make the trip every day and take approximately 14 hours.

From Mendoza, you can head north to visit Cafayate and Salta, or follow this 9-day itinerary into Chile's wine region.

LATAM, Aerolineas Argentinas and Norwegian Air all fly from Aeroparque Airport to Mendoza. Aeroparque is only 3 miles from the city center of Buenos Aires and is easy to reach by taxi or private transfer. The airport is located on the Costanera Norte, right along the La Plata River.

Flights to Mendoza also depart from El Palomar (EPA), the local lowcost airport, though the airport is harder to reach and not recommended. Aerolineas Argentinas operates a flight from Ezeiza Airport (EZE) to Mendoza, which can be useful for people transferring from an international flight who don't want the added hassle of changing airports.

Once you arrive at Mendoza Airport (MDZ), the Mendoza city center is only a short 5.5-mile drive away by taxi or private transfer.

Duration: 14 to18 hours, depending on the bus route and number of stops

Buses traveling from Buenos Aires' Retiro bus station to Mendoza depart daily. You can book your ticket online or directly at the bus station in the offices on the second floor. Keep an eye on your belongings around Retiro, as the area can be a bit unsafe, especially at night or early in the morning.

Buses take between 14 and 18 hours to make the trip, depending on the number of stops along the route. You can check how many stops each bus has scheduled online or directly at the bus terminal.

The Mendoza bus terminal is only a few blocks away from the city center, and from there you can take a taxi or local bus (or even walk) to your destination.