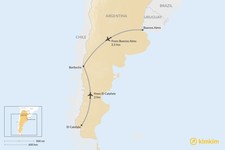 Known for its architecture reminiscent of a Swiss alpine village and tasty chocolate, Bariloche is at the top of many visitors' lists. The easiest way to reach the city is to book a flight from Buenos Aires or fly up from El Calafate in the south after touring southern Patagonia. Either way, there are direct daily flights to Bariloche from both cities.

For family-friendly fun, check out this 8-day itinerary that covers Bariloche and Buenos Aires. If you're more into active travel, this 7-day trekking itinerary covers some of the best hiking options in the area.

The easiest way to reach Bariloche from Buenos Aires is to take a direct flight from Buenos Aires' Aeroparque airport (AEP), which is in Palermo and can easily be reached by taxi or private transfer. If you are arriving from an international destination you'll most likely land at Ezeiza Airport, which is outside the city. You'll need to take a shuttle bus or private transfer to Aeroparque, which takes at least an hour. Make sure to allow extra time for traffic (especially during rush hour).

Once you land in Bariloche a taxi or private transfer can take you into the city center in 25 minutes.

Learn more about traveling from Buenos Aires to Bariloche.

Visitors often combine visits to El Calafate and the Perito Moreno Glacier with a stop in Bariloche. Aerolineas Argentinas operates direct flights up from El Calafate, which is 640 miles (1,030 km) away and takes a little under two hours to reach.

Learn more about traveling from El Calafate to Bariloche.

Experience the most famous sites and beautiful nature excursions in both...

An alpine hub in Argentina's Lake District, Bariloche is considered one...

This scenic tour through Argentina takes you on an adventurous journey...

This is an active adventure, perfect for those passionate hikers and...

Argentina is a destination that's fun for the entire family. During this...

Independent-minded travelers will love this extensive itinerary that...

E
Erica F.
Pennsylvania, United States
"We had the most incredible experience from start to finish. Jason was helpful, responsive and planned the most amazing trip! I will never go on a trip again ..." read more
Traveled to Argentina as a group in November, 2022

Michael S.
California, United States
"Marina covered all the bases and was excellent. Our experience with Argentina and with KimKim was AMAZING! Trip of a lifetime! Only downside is now we’re ..." read more
Traveled to Argentina as a family in August, 2022

Heather V.
Virginia, United States
"We loved hiking the Perito Moreno Glacier, it was amazing. The all glaciers boat tour was amazing as well especially if you upgrade to The Captains Club. Rol..." read more
Traveled to Argentina as a family in August, 2022
Plan your trip to Argentina
Customize your trip with help from a local travel specialist
Plan Your Trip