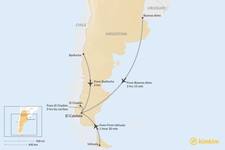 Perched on the shore of the ice-blue Lago Argentino, El Calafate is most known as the gateway to the Los Glaciares National Park and its famous Perito Moreno Glacier. Many visitors choose to fly directly to El Calafate from Buenos Aires or visit El Calafate on the way back north from Ushuaia and Tierra del Fuego. Your best bet to reach El Calafate is to take a plane—the notable exception is if you're traveling to or from El Chaltén, which is only about 133 miles (214 km) to the north.

If you're traveling from Buenos Aires, you can take a flight directly from Aeroparque (AEP) down to El Calafate. If you're connecting from an international flight you'll probably have to transfer from Ezeiza Airport 18 miles (28 km) from the city center, which you can do by private transfer or shuttle bus.

The El Calafate Airport is only a little bit outside the city (12.5 miles/20 km), which is easily reachable by private transfer or taxi. If you decide to rent a car, there are also several offices at the airport where you can pick one up.

Learn more about traveling from Buenos Aires to El Calafate.

Ushuaia, or the "End of the World," is 350 miles (565 km) south of El Calafate. Visitors to Patagonia often try to see both during their trip, and the easiest way to do that is book a direct flight with Aerolineas Argentinas or LATAM.

If you're interested in visiting Ushuaia and El Calafate, check out this 12-day itinerary for inspiration.

Several buses make the journey between El Chaltén and El Calafate daily, especially during the tourist season (December-February). You can also choose a private transfer or rent a car and make the trip yourself. Don't miss the views of the Lago Argentino and Mount Fitz Roy along the way, and see if you can spot any guanacos (local llamas).

Find out more about traveling between El Chaltén and El Calafate.

Flying south from Bariloche to El Calafate is your easiest option, and Aerolineas Argentinas operates a non-stop flight that connects the two and takes a little under two hours.

If you're interested in visiting Bariloche and El Calafate you can check out this 14-day itinerary, or learn more about the route.

This exciting 12-day itinerary explores key highlights of Patagonia (in...

Experience the most famous sites and beautiful nature excursions in both...