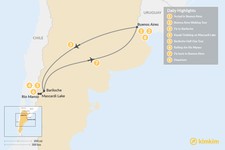 Discover Argentina's best family-friendly highlights on this weeklong itinerary. Begin with a walking tour of metropolitan Buenos Aires, visiting the city's most famous sites in an interactive setting. Next, you're off to the Lake District and the famous alpine city of Bariloche, where you'll enjoy kayaking, hiking, and whitewater rafting down the Río Manso. Finally, return to the capital city for one more day of food and fun.

After enjoying the exciting city life in Buenos Aires, it's time to head for the southern wilderness. At the scheduled time, a driver will pick you up from your hotel and transfer you to Bueno Aires' local airport, Aeroparque. From here you'll catch a flight to San Carlos de Bariloche, the main city in Argentina's Lake District, which is home to some of the most impressive scenery in the entire country.

San Carlos de Bariloche was founded in 1902 on the shores of Lago Nahuel Huapi, which itself is part of the larger Parque Nacional Nahuel Huapi. If you detect some native influence in that name, you're correct. It comes from the Mapuche indigenous people who once inhabited the area, and it means "jaguar island." The lake straddles the Chilean border, with the city of Bariloche located on the southeast shore. While beautiful in the summertime, Bariloche became globally famous as a prime winter ski destination. So be excited, because you're about to experience the best slopes in the whole of Argentina.

Upon arrival at Bariloche's airport, a driver will meet you and transfer you to your hotel. Even though you may be tired from your flight, try to get out and explore the city. The charming chalet-style buildings and alpine architecture can be seen and enjoyed on a brisk walk around, and the city center abounds with waterfront plazas, chocolate shops, and upscale restaurants.

Some suggested activities in and around Bariloche include:

When dinnertime comes around, be sure to sample the local cuisine. You'll find that it differs considerably than what's typically found in Buenos Aires. Here regional fare like wild boar and lake trout is popular and delicious, as is the fondue (a culinary addition first introduced by the city's Swiss immigrants).

This is a special day as you'll get to embark on a combined excursion that mixes kayaking on Lago Mascardi with a nature trek through the forest. The adventure begins with a pickup at your hotel followed by a 45-minute drive south of Bariloche along the famed Ruta 40 to the lake.

Your first destination is a lakeshore campsite owned by the local indigenous community. Here you'll hop into your kayak and begin paddling for Playa Leones, the most beautiful beach on Mascardi. Once you arrive at this tranquil pebble beach you'll be able to relax on shore and enjoy the surrounding wilderness.

Afterward, you'll embark on a nature trek through native coihue forest until you reach a secluded lagoon. Then it's time to head back to Playa Leones, where you'll enjoy lunch while relaxing on the shore. Finally, you'll kayak back to the starting point and return to Bariloche.

In the morning you'll partake in an active history lesson as a guide leads you on a tour in and around Bariloche. Along the way, he or she will explain the legacy of the city and its surrounding locales. This tour comprises a classic circuit that covers the city as well as some of the most famous viewpoints outside of it, like Cerro Campanario and the Llao Llao Peninsula. The former offers panoramic views of Lago Nahuel Huapi from its summit, while the latter is the site of the most impressive hotel in the country, Hotel Llao Llao.

Over the course of this tour, your guide will explain how San Carlos de Bariloche evolved relatively quickly from a small mountain village into one of the most attractive and popular cities in Argentina. As you experience the natural beauty of the region and hike around its terrain, you'll begin to understand why Bariloche was voted Argentina's national capital of adventure tourism. At the end of the tour, you'll visit a local microbrewery for lunch and a beer tasting.

In the morning a driver will meet you at your hotel and transfer you and other passengers down Route 40 to the edge of the Nahuel Huapi National Park. Eventually, you'll arrive at John´s Camp, a Patagonian ranch near the Manso River that serves as the starting point for today's river rafting excursion. Upon arrival at John´s, you'll be struck by the beauty of the grounds. More than 50 years of work are reflected in this property, from the main house to the beautiful garden abounding with flowers and trees, all of it surrounded by an unobscured view of Mt. Bastion.

A light breakfast of coffee and croissants will be provided, and after eating your group will change into wetsuits. Then it's time for a safety talk from the head guide, after which you'll embark down the Río Manso.

This stretch of river you'll travel down cuts through a canyon, and it's at once beautiful and challenging. You'll find fertile vegetation on the riverbanks and some of the best whitewater in the region stretching out in front of you. The rapids here are class III and IV, so be prepared to get wet. Just the names of these rapids evoke excitement and adventure: Ozone Hole, Shout and Turn, Little Toboggan, and Scrambled Egg are some of the sections you'll brave before pulling up to the riverbank at the Chilean Border. Here you'll leave the river behind, change clothes, load up all the gear, and enjoy a bit of lunch. Afterward, you'll transfer back to Bariloche.

Having experienced Argentina's unforgettable south, you will transfer from your hotel to the airport and hop a flight back to Buenos Aires. This is where you started your journey and it's also where everything comes full circle, as you'll now take a connecting flight back home.

Despite the bittersweet goodbye, rest assured that we will be waiting for you with open arms should you ever decide to return!

Immerse yourself in Argentina's rich culture and beautiful landscapes in...

Argentina is a destination that's fun for the entire family. During this...

From the multicolored gorges of Cafayate to the Yunga cloud forest, and...
Argentina Tours & Itineraries

With ten days to spend in Argentina, you have enough time to visit...
Make the Most of Your Time in Argentina

December is a magnificent time to visit Argentina when spring...

October is in the midst of spring—a great time to visit Buenos Aires,...

July is Argentina's peak winter month when ski resorts heat up in...

August is the last full month of winter and the end of Argentina's ski...
Argentina Travel Advice

This adventurous 10-day itinerary takes you deep into the dramatic...

Over seven days, you will discover some of the most spectacular natural...

Celebrate your honeymoon with a romantic tour through the wine regions...

For travelers who want an immersive experience in Argentina, this 17-day...

How to Get from El Calafate to Los Glaciares National Park

There's no better starting point to get to Los Glaciares National...

How to Get from Salta to Cafayate

Salta is a great jumping-off point to explore Northwest Argentina and...

How to Get from El Calafate to Iguazú Falls

Traveling from El Calafate, in Patagonia, up to the Iguazú Falls, which...

Amy P.
Panama
"The trip to Argentina was incredible! Such convenience of having all of our transport coordinated for us. We loved the tango dinner show experience and our t..." read more
Traveled to Argentina as a group in November, 2019

Lance H.
California, United States
"KimKim was the easiest travel experience I have ever had! All I had to do was give a rough idea and BOOM! out came a perfectly planned vacation. Not only was..." read more
Traveled to Argentina as a couple in May, 2019
Create your custom-made trip to Argentina
Get Started