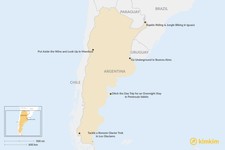 Cosmopolitan colonial cities, mega-waterfalls with hundreds of cascades, and still-advancing icefields peaking into lurid glaciers: Argentina's attractions are justifiably very popular with tourists. But the good news is, you don't have to stray far from these blockbuster sights to get a very different—and crowd-free—experience.

Chances are, you'll arrive (and spend your first few days) in Buenos Aires: a metropolis few can dispute as one of South America's most enjoyable capitals. What's not to love about tango, steaks, dazzling colonial buildings, and pulsing nightlife? But some travelers report the charm wearing off—just a bit—because of the ever-growing crowds. Escape them with some of the city's less-known attractions—many of which are, literally speaking, underground.

The Recoleta Cemetery, for example, well known as one of the continent's finest, has miles of rarely frequented tomb-flanked passageways, many with their own compelling stories. And El Zanjón de Granados, undiscovered until quite recently, is a museum in the passageways underneath the San Miguel neighborhood. Thought to be a part of the original settlement of Buenos Aires, its centuries-old tunnels were mostly rediscovered and made accessible in the 1980s.

One of the most novel ways to lose the street-level bustle is to seek out one of Buenos Aires' infamous speakeasies. These secretive bars, inspired by Prohibition in the U.S., are often un-signposted establishments—but with a little research, even a holiday-maker can get in for a drink. The best example is Harrison Speakeasy: there's an entrance just for members, but anyone can dine at Nicky's New York Sushi and ask your waiter to "show you the bodega" after dinner.

Most of the visitors to the Iguazú National Park naturally make a beeline for the waterfalls that are the park's main attraction: crowding out to the end of the viewing platforms to get a look at one of the largest, widest, and mightiest series of cascades anywhere in the world, and then returning.

If you choose to linger in the area, you can turn a distant shot of the falls into an up-close visceral experience as you speed by boat into the wildest of the cascades, getting drenched in the spray and eddies of the plunge pools at the bottom. Several boat trips make the hair-raising journey across the rapids. If you want to escape your fellow tourists without getting wet, one sure way to do so is to with a bike tour—Puerto Iguazú is renowned for having almost exclusively red dirt tracks, and bike trips traverse from the city through jungle to the waterfalls almost entirely off-road, encompassing some great downhills and around 25 miles of pedaling.

Plan your trip to Argentina
Customize your trip with help from a local travel specialist.
Plan Your Trip

Mendoza: Put Aside the Wine and Look Up

There are 1500-odd vineyards in the Mendoza region, yielding such delights as the famous Argentine Malbec. A few out-of-the-ordinary wine-themed attractions exist, like the wine wellness retreat at Cavas Wine Lodge where you can get a facial scrub made from crushed grapes. But look up from your wine glass, and you'll see the Andes mountains on Mendoza's doorstep—filled with plenty of outdoor activities to choose from.

Partly due to all the wine attractions below, rarely has a destination's mountain scenery been so little explored by travelers. Under an hour's drive southwest of Mendoza city via Hwy 7, Potrerillos sits above a 7.5 mile-long lake with great whitewater rafting on the Río Mendoza nearby. The same highway continues through classic Andean mountain scenery 1.5 hours further up to the settlement of Los Penitentes and the start point for the ascent of Aconcagua, the highest mountain in the southern hemisphere. Unusually for a mountain this high, you can ascend it without technical climbing experience.

For a 5-day tour of the Mendoza region that includes wine and mountain scenery, check out Mountains & Wine in Mendoza - 5 Days.

Península Valdés: Ditch the Day Trip for an Overnight Stay

Anyone bound for the south of Argentina invariably factors in a stop-off on Península Valdés, a hammerhead-shaped peninsula east across Golfo Nuevo from Puerto Madryn. Nearly 100,000 visitors descend here each year to clap eyes on South America's most varied marine life—much of it without even leaving dry land. The southern right whale stars alongside the other wildlife, including Magallenic penguins, sea lions, and elephant seals.

Almost all wildlife-watchers come on a day trip. Instead, splash out on a stay on one of the peninsula's estancias (ranches) and it could be the best lot of dollars you ever spent. Some of them have grounds that include long stretches of shoreline equally as frequented by wildlife as the main viewing spots, and these are for guests only to explore: it will often be just you, some few other guests, much of the afore-mentioned animals and not a day-tripper in sight. Check out these estancias and other interesting places to stay on this list of Best Unique Lodging in Argentina.

Encompassing a significant part of the Southern Patagonian Icefield, it comes as no surprise to learn that Los Glaciares National Park near El Chaltén is an extremely popular destination—particularly the Perito Moreno, one of the rare still-advancing parts of the field. Most visitors can be found gazing at, boating around, or walking on this specific glacier, and there is little getting away from the masses.

But Perito Moreno is an infinitesimal fraction of the national park, which encompasses thousands of miles of wilderness and a number of guided trekking opportunities. One route growing in prominence with hardcore adventurers is the Huemul Circuit. This four-day hike entails river crossings, some fairly vertiginous mountain ascents, and camping wild every night. But the scenery is full with panoramas of empty peaks and iceberg-strewn lakes as you build up to views of the icefield and the Viedma Glacier, four times Perito Moreno in size and rendering its much-visited counterpart tame by comparison.

How Many Days to Spend in Argentina

With 10 days to spend in Argentina, you have enough time to visit...

With 10 days to spend in Argentina, you have enough time to visit...

This epic 10-day adventure in Argentine Patagonia starts with a trip to...

Northern Argentina is home to attractions that range from painted...

Fifteen days in Argentina gives you enough time to explore the...

Explore the natural wonders of Chile and Argentina on this adventurous...

From the rush of capitals Buenos Aires and Montevideo to the calm of...

Suzanne M.
Virginia, United States
"I have to give a tremendous thank you for Natalia. She made the planning process very easy for our trip from Buenos Aires to Bariloche, to Ushusaia the best..." read more
Traveled to Argentina as a couple in November, 2022

Rachel P.
Georgia, United States
"We had such a fantastic trip!! Our driver was super friendly and helpful and showed us all over Buenos Aires. He really went the extra mile to help us with ..." read more
Traveled to Argentina as a couple in September, 2022
J
John O.
Canada
"My daughter and I enjoyed a great trip to Argentina and Brazil that we booked through KimKim. It was easy to work with their pre-set itineraries and customiz..." read more
Traveled to Argentina as a couple in April, 2022
Plan your trip to Argentina
Customize your trip with help from a local travel specialist
Plan Your Trip