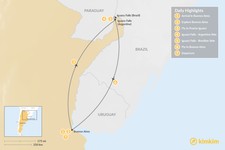 Treat yourself to an in-depth exploration of two of Argentina's most iconic destinations, Buenos Aires and Iguazu Falls. Begin your journey in Buenos Aires and take in the city's vibrant history and culture during a full-day walking tour. Next, head to Iguazú Falls National Park to see the jaw-dropping beauty of the largest waterfall system in the world. Since Iguazú lies on the border between Argentina and Brazil, you'll get to experience the falls from both countries. Top it all off with a trip back to Buenos Aires to enjoy a traditional dinner and tango performance.

You will have the rest of the day free to relax, visit the Three Borders Landmark in the tri-border area between Argentina, Brazil, and Paraguay, and enjoy a panoramic view of Iguazú Falls from the walking paths surrounding the cascades.

Plan your trip to Argentina
Customize your trip with help from a local travel specialist.
Plan Your Trip

After breakfast, a driver will pick you up and transfer you to the entrance of Iguazú National Park, on the Argentine side of the falls. This is where you will begin the day's adventure. It's a full-day excursion that involves traversing three circuit routes around the falls, each offering exceptional vantage points from which to view this magnificent natural wonder.

The upper circuit, which features 800 meters (2,624 feet) of catwalks. These wooden walkways are elevated from the jungle surface so as not to disrupt the natural pathways used by the indigenous fauna. This circuit affords views of the upper portion of Iguazú. That means you'll be treated to no shortage of panoramic vistas of the surrounding falls.

The lower circuit, which consists of 1,600 meters (5,250 feet). These are also elevated and offer views from directly below and around Iguazú falls. This circuit takes you near the base of falls and provides a unique experience where you'll be up close with the natural surroundings, feeling the magnitude of the falls from up close.

Garganta del Diablo (Devil's Gorge) enjoys an intimidating reputation that will precede your arrival to the park. This is the star of the show and the biggest of the some 275 falls that makeup Iguazú. A small tourist train leaves from within the park at the Cataratas Station and travels 18 minutes to Garganta Station, where you'll find restrooms, a snack bar, and the start of the wooden pathway to the falls. Then a walk of about 1200 meters (3,937 feet) will take you over the river, culminating at a viewpoint. Just hearing the plunging falls reverberating in your ears is a one-of-a-kind experience. Actually peering 82 meters (269 feet) down into the cavernous abyss as the highest of Iguazu's falls thunders all around you is downright unforgettable.

At the end of the tour, the driver will pick you up and transfer you back to the hotel.

The Brazilian side of Iguazú may lack the number of hiking routes found on the Argentine side, but it makes up for it with a wealth of amenities in the form of a visitors center and restaurants complete with terraces overlooking the falls. Upon arrival at the Visitors Center, you'll board a double-decker bus that embarks on a 30-minute ride into the park. It will eventually stop at the entrance to a path leading to the falls.

The first stop after you disembark the bus is a balcony that offers panoramic views of the Argentinean side of the falls (be sure to keep your camera at the ready). You'll then hike 950 meters (3,116 feet) along the Iguazú River until you reach the falls on the Brazilian side. The walkway passes over the river and next to the Salto Floriano (Floriano Falls). This magnificent wall of plunging water makes quite an impression, as do the vistas of the lower Iguazú River and the Devil’s Throat Canyon.

This morning, transfer to the airport for your flight back to Buenos Aires. Upon arrival in the capital, transfer to your hotel. You'll then have the day to explore this incredible city at your leisure.

In the evening, enjoy a traditional Argentine meal accompanied by free-flowing wine and a tango show, one of Argentina's most iconic cultural highlights. Experience the heartbeat of Argentina first-hand before heading back to your hotel to relax for the night.

Eat one last breakfast in Buenos Aires, and at the appropriate time, drive the airport for your departing flight and head home after an unforgettable trip.

This seven-day trip through Argentina is perfect for wine lovers. You'll...

This trip takes you to one of the most incredible natural landmarks in...

This trip takes you through one of Argentinas most beautiful landscapes,...

This four-day getaway to Iguazú Falls takes you into the heart of one of...

On this five-day trip, you’ll experience both the city life and the...
Best of Puerto Iguazu

How Many Days Should You Spend in Buenos Aires?

Buenos Aires is a romantic Latin American capital whose highlights, like...

Sometimes called the "Paris of the South," Buenos Aires is renowned for...

As befits one of South America's most sophisticated cities, Buenos Aires...

Best Things to Do in Buenos Aires

January is the middle of summer in Argentina and Brazil. Temperatures...

It's hot and humid at Iguazú Falls in February. Temperatures reach into...

March is a great time to visit Iguazú: crowds have thinned out after the...

Consider yourself lucky if you're visiting Iguazú in April. Thanks to...
Best of Iguazu Falls

Explore the natural wonders of Chile and Argentina on this adventurous...

From the rush of capitals Buenos Aires and Montevideo to the calm of...

From thundering waterfalls to multicolored mountains, the geography of...

From red-rock desert paintings to waterfalls that span two countries and...

Experience Argentina's geographical extremes and admire the beauty of...

Frances X.
Canada
"We had a great two-week trip around Argentina. The trip includes a good balance of history, culture, scenery, and cuisine in each of the locations we visited..." read more
Traveled to Argentina as a family in August, 2022