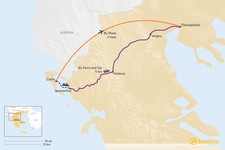 The distance between the Ionian island of Corfu and Greece’s second-largest city, Thessaloniki, is about 225 miles (362 km). The best way to get between the two is via a quick and easy one-hour flight. If you’d like to see some of Northern Greece along the way, you also have the option of taking a ferry to the mainland, and traveling overland from there.

This 14-day itinerary is a great way to explore both Corfu and Thessaloniki, plus Northern Greece’s highlights.

Direct flights run from Corfu to Thessaloniki twice a week. Flights can sell out early, so booking in advance is recommended. Prices are generally consistent throughout the year.

Corfu’s airport is located not far from Corfu Town. The drive from downtown to the airport takes under ten minutes. There is also an airport bus, which leaves from the Blue Bus Station in Plateia Georgiou Theotoki.

By Ferry and Car

The other way to get from Corfu to Thessaloniki is by taking a ferry to Igoumenitsa on the Greek mainland, and then traveling by land to Thessaloniki.

Ferries from Corfu to Igoumenitsa run every day, multiple times a day. Many ferries can accommodate cars for an extra fee. The ride takes one to two hours, depending on the type of ferry you choose.

From Igoumenitsa, you can reach Thessaloniki by rental car or private transfer. There is also a bus that runs twice a day.

If you choose to drive to Thessaloniki, the fastest way to get there is along the E90 National Road; you’ll have to pay tolls along the way. The drive takes around four hours and is very scenic, taking you through the Pindus Mountains and past the Zagori Region, famous for its isolated villages. Keep in mind that some mountain roads are narrow and steep.

There are several national parks in the area which are good places to stop for a trek. Note that Pindus National Park is home to brown bears, so you should use caution when hiking there.

If you take the exit toward Trikala near the town of Malakasi, you can take a different, longer route to Thessaloniki that will take you past the monastery complex of Meteora, Mount Olympus, and the ruins at Dion.

The journey from Athens to the large island of Naxos in the center of...
Getting Around Greece

Visit some of Greece's beautiful lesser-known regions on this 9-day...

Enjoy an unforgettable journey through the varied landscapes of northern...

These three Greek islands will give you a hands-on experience of...

Make your way across the middle of Greece with this two-week itinerary....

Whether you're strolling, eating, or both, you'll get a full taste of...

J
John M.
the Netherlands
"Well organized trip, thanks to Maria and Dmitri. Transports were smooth and punctual with excellent drivers. Our driver in Athens was extremely helpful. Host..." read more
Traveled to Greece as a couple in July, 2020
J
Joseph S.
Maryland, United States
"The positives - I would definitely recommend using Chris. Very impressed with the overall trip of 2 weeks we booked with Chris at kimkim. The organization ..." read more
Traveled to Greece as a family in January, 2020

Tessa R.
Canada
"This is the first time I’ve booked a trip with KimKim and it wont be the last. The trip planning was so easy and having KimKim plan all the details took the ..." read more
Traveled to Greece as a family in September, 2019
K
Kelcie M.
Canada
"It was an incredible trip and Harris & KimKim made it so easy to enjoy our vacation. We ran into a few small problems during our trip and they were always qu..." read more
Traveled to Greece as a couple in August, 2019
Create your custom-made trip to Greece
Get Started