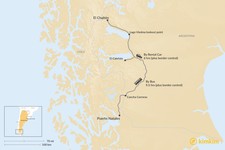 Traveling between El Chaltén and Puerto Natales can be tricky—even though the two towns are only 260 miles (420 km) apart—because it involves crossing the border between Argentina and Chile. But there are several options available, especially during Patagonia's peak tourist season (December through February).

This 16-day Patagonia tour starts in El Calafate, the region's hub for seeing the glaciers of Patagonia, and then goes north to El Chaltén before heading back south to Torres del Paine National Park and ending around Ushuaia, the world's southernmost city.

Using a rental car to get from El Chaltén to Puerto Natales gives you more control over your itinerary, and more options to stop for pictures along the way. Make sure that the car rental company gives you permission to cross the Argentina-Chile border (you'll need to show proof to border control).

There are several lookout points on the road but not many gas stations, so check that your tank is full before setting off. When you leave El Chaltén, make sure to stop and take a last look at Mount Fitz Roy behind you. Drive on RP23 along Lago Viedma (Viedma Lake) and right onto RN40. Don't miss the Lago Viedma lookout point, which is a good spot to take pictures. You'll continue on RN40, past Lago Argentino (Argentino Lake) and the turnoff for El Calafate. Tapi Aike, one of the few gas stations in the area, is located further south, right at the intersection of RN40 and RN7.

There are no direct buses between El Chaltén and Puerto Natales; there are, however, buses to both places from El Calafate. For this reason, many people choose to spend the night in El Calafate and visit the Perito Moreno Glacier before traveling on to Puerto Natales. Buses are much more frequent during the tourist high season, which makes traveling in the area easier.

The first bus from El Chaltén to El Calafate takes 3 hours, and the bus from El Calafate to Puerto Natales takes 5.5 hours, on average, not including the time it takes to cross the border. Make sure to book your tickets in advance, especially during the high season.

Two weeks is a fantastic length of time to experience Southern...

Argentina, particularly the Patagonia region, offers some of the...

This 11-day tour dives into Argentina and Chilean Patagonia with a slew...