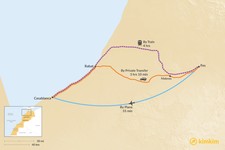 Those looking to get from Fes to the coastal city of Casablanca have several options for making the 182-mile (294 km) trip between cities. The most convenient option is to take a direct, hour-long flight. Going overland by private transfer takes at least three hours, but you may want to make a day-long road trip out of it in order to make the most of Meknes and Rabat. There is also a direct train that leaves hourly from Fes.

Those looking to save time may wish to consider flying directly from the Fes (FEZ) to Casablanca (CMN). Flights are direct and will get you to Casablanca in under an hour.

Travelers who opt for a private transfer to complete the journey from Fes to Casablanca will have the option of stopping at several notable cities along the way.

First up is Meknes, one of Morocco's four imperial cities the former home of the royal family. Three sets of ornate and imposing buildings, the magnificent Bab el Mansour gates, and the sultan's tomb in the heart of the old city are all impressive vestiges of Morocco's storied past. If you would like to shop for local goods and souvenirs and have traditional Moroccan food, stop at the Place el Hedim.

Further along the journey is Rabat, Morocco's capital city. In Rabat, you can opt to view the Mausoleum of Mohammad V and the famous Hassan Tower—the minaret of a half-finished mosque—or you can head slightly outside of the city to the medieval fortress of Chellah, which also includes statues and graves that date as far back as the Roman Empire.

Those who prefer to travel by rail can take an ONCF train directly from Fes to Casablanca. Direct trains leave hourly.

Louis U.
Georgia, United States
"This was a trip of a life time. Morocco is a beautiful country and the people are friendly. We could have not planned a better trip on our own, and we’re..." read more
Traveled to Morocco as a group in June, 2022

Doug J.
Indiana, United States
"We loved Morocco… and KimKim made it the best it could be. Ilyace was our guide: Extremely professional and truly catered to all of our needs. Whenever w..." read more
Traveled to Morocco as a family in July, 2022
D
Diana N.
Australia
"Morocco was a trip that I will truly never forget. I was in Morocco for 9 days with my boyfriend and Karim was our personal driver. Not only was he our drive..." read more
Traveled to Morocco as a couple in July, 2022

Lynda W.
Canada
"A huge thank you to all the people involved in our amazing trip to Morocco 🇲🇦! First let’s start with Yassine who planned the whole trip! Thank you ! You li..." read more
Traveled to Morocco as a couple in July, 2022

Kelly K.
New York, United States
"We really enjoyed our 8 day trip around Morocco! It was extremely helpful to have Abdellah plan our itinerary. He listened to our priorities and made adjus..." read more
Traveled to Morocco as a couple in June, 2022