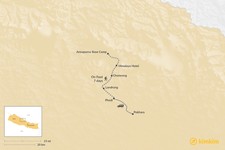 The Annapurna Base Camp (ABC) trek is a popular trek in the Annapurna Himalaya, and there's only one way to get there: on foot.

Duration: 7 days or more, depending on your trekking itinerary

Pokhara is the gateway to the Annapurna Himalaya, and is the starting point for most treks to ABC. Find out more about getting from Kathmandu to Pokhara in this article.

Trekking is the only way to get to ABC, as the Government of Nepal banned sightseeing flights to ABC (and nearby Machapuchare Base Camp) in 2018. Only rescue helicopters are allowed there now. On foot, it takes about seven days to reach ABC, although trekking itineraries are always flexible, so it may take you a little more or less time.

From Pokhara, take a private transfer along the Pokhara-Baglung Rajmarg Road for about an hour, stopping at Phedi or Kande. From there, trek to Dhampus, which is where you'll spend the first night of the trek. It's an attractive Gurung village with great mountain views.

Over the next few days, trek deeper into the hills and mountains, stopping at Landrung, Chomrong, Himalaya Hotel, and Machapuchare Base Camp before reaching ABC. Because of the high altitudes—ABC is at 13,550 feet (4130 meters)—it's important to be properly acclimatized on the way, so many people spend a full day and two nights at Himalaya Hotel.

The final day of the inbound trek, from Machapuchare Base Camp to ABC, will be mostly through dry, rocky terrain. On earlier days, however, you'll encounter more greenery and cultivated land. From ABC itself you'll have great views of Machapuchare, Annapurna South, Annapurna I, Hiuchuli, and other enormous peaks

The ABC trek is an in-and-out trek, so you'll need to retrace your steps on the outbound journey.

Upper Mustang is a restricted area that remains quite a challenge to get...
Getting Around Nepal

This is a there-and-back trek to the awe-inspiring Annapurna Sanctuary,...