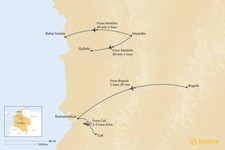 El Chocó is a beautiful, and rather isolated, region on the west coast of Colombia. Here you’ll find unspoiled beaches and coastal areas that haven’t been touched by development and are still much in their natural state. Home to national parks and bird sanctuaries like Las Tangaras and Cerro Montezuma, you won’t go long without spotting a wild animal.

El Chocó is the only department in Colombia to have coastlines both on the Pacific and Atlantic Ocean. This area is so isolated that transportation options to get here are somewhat limited. For example, there is only one main road in this region that goes from Cali to Buenaventura.

Most people fly to get here. El Chocó is usually reached by flight from Medellín to airports in Bahía Solano and Quibdó.  From Bogotá, there are direct flights to Quibdó or to an airport near Buenaventura. To travel within the region, you can explore nearby beaches and villages by boat due to limited roads in the region.

Consider this action-packed 10-day itinerary to make traveling around the region painless and stress-free. The trip starts in Medellín, before setting off to the seaside town of Bahía Solano where you'll explore Utría National Park. Other highlights include visits to spectacular beaches to spot humpback whales and sea turtles close to shore. You’ll also visit Nuquí, a small community that offers activities like canoeing and soaking in hot springs.

Duration: 40 minutes to an hour

José Celestino Mutis Airport (BSC) is the airport based in Bahia Solano. In Quibdó, the airport is called El Caraño Airport (UIB). Both airports are small and rather remote, but finding taxis and tuk-tuks outside are not a problem to continue onward to your accommodation.

The most convenient way to get from Bogotá to the Pacific Coast is to fly to either Quibdó or an airport near  Buenaventura. From Bogotá’s El Dorado International Airport (BOG), there is a direct flight to Quibdó’s UIB Airport that takes one hour and twenty minutes in duration. There is also one direct flight route from BOG to Gerardo Tobar Lopez (BUN), a small airport about 30 minutes away from Buenaventura. The flight is serviced by SATENA Airlines, a domestic Colombian budget airline. It takes about an hour and a half to reach BUN on this route. There are also buses that go directly from Bogotá that leave in the early morning and early evening for Buenaventura. This journey can take up to 17 hours and is not recommended due to the road conditions.

From Cali, the easiest way to get to the Pacifica Coast is by bus to the city of Buenaventura. There are frequent buses to and from Cali. It usually takes 2 to 3 hours by bus to reach the Buenaventura. You can also take a taxi or do self-driving for most major cities, but both options are not recommended. The journey takes a surprisingly long time, thanks to the difficult, bumpy roads. Due to the isolated area, some roads are essentially undrivable, making it super difficult for vehicles to negotiate.

Flights from Cali to Buenaventura are non-existent, so taking a bus is the only reliable option. The bus station in Buenaventura is close to the city center and taxis/moto-taxis are readily available to your accommodation or to the Muelle Turístico so you can take a boat up the coast to your next destination.

You can traverse the 83 miles (133 km) that stand between Cartagena and...
Getting Around Colombia

Jen D.
California, United States
"Our trip to Colombia was amazing. I whole heartedly recommend this trip to anyone seeking an interesting, inspiring and fun vacation. Wendy was a fabulous ..." read more
Traveled to Colombia as a couple in July, 2022

Jessica A.
Illinois, United States
"What an incredible experience! Michael was attentive and listened to my needs on the trip. Each guide, Jose and Roberto, were kind, accommodating, and kno..." read more
Traveled to Colombia as a couple in July, 2022
E
Elizabeth Z.
Maryland, United States
"We LOVED our time in Cartagena and really appreciated the care Michael took to make sure each detail was thought out. The Armeria Real hotel suited our famil..." read more
Traveled to Colombia as a family in July, 2022

Carolyn K.
Canada
"We love Colombia! It was a romantic, elegant cultural experience that gave us 10 days of non stop fun. Margoth was incredible. She planned a trip that was..." read more
Traveled to Colombia as a couple in July, 2022
E
Eva W.
Oregon, United States
"We had a great trip to Colombia. Both Felipe and Margoth helped us during the entire vacation and took care of everything from start to finish. All was outs..." read more
Traveled to Colombia as a family in June, 2022

Sangini S.
Virginia, United States
"We had a remarkable family trip to Colombia recently. Michael from Chaska Travel was incredibly flexible, attentive to details, and prompt in getting us info..." read more
Traveled to Colombia as a family in June, 2022

Amber A.
California, United States
"Overall we had an amazing experience on our trip. Everything was well organized and planned with detail which was a relief. I was surprised to have the same ..." read more
Traveled to Colombia as a couple in June, 2022

Elise A.
Florida, United States
"We just returned from a magnificent vacation in Colombia planned by the amazing local specialist, Wendy. Wendy planned the perfect itinerary for us in Medel..." read more
Traveled to Colombia as a couple in June, 2022
Create your custom-made trip to Colombia
Get Started