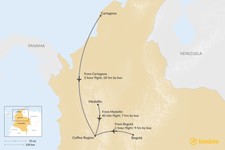 The three largest cities that make up Colombia's Coffee Region—the Zona Cafetera—are Pereria, Armenia, and Manizales. From any of these hubs, transport is available to visit the charming towns of Salento and Filandia, traveler favorites that offer a more authentic and traditional view of the region.

Medellín is the main gateway to the region, offering quick 40-minute flights to each of the three Coffee Region hubs. Direct flights are also available from Bogotá and Cartagena. You can also take the bus, though travel times are long and road conditions are not always predictable.

Avianca Airlines has direct and nonstop flights daily from El Dorado Airport (BOG) in Bogotá to the airports in Pereira, Manizales, and Armenia. Non-stop flights from Bogotá all take around an hour to reach.

Private vans to Pereira are also available that take 4-5 hours from Medellín. Colectivos and buses depart from the Terminal de Transportes del Sur in Medellín and take 6 to 7 hours to arrive in Salento.

There are flights throughout the week from Cartagena airport called Rafael Núñez International Airport (CTG) to Pereira’s Aeropuerto Internacional Matecaña (PEI). Flight time is approximately two hours via Viva Airlines. The cost of airline tickets are not that much more than bus tickets. Flights are highly recommended over riding the bus due to the affordable cost of airline tickets and the time you’d save in the long run, saving you money for more cups of coffee in the Eje Cafetero region.

From the north coast, the bus ride would be a pretty extreme journey to reach the coffee region. Routes all include a transfer in Medellín. You would then have to wait for another bus to continue south to the Coffee Region. Depending on your wait time, you’d be on a bus for over 18 hours, not including the time in Medellín you’d be waiting to catch the second leg of your journey.

During this 16-day tour through Colombia, you’ll visit some of the...

Simon K.
New Jersey, United States
" In one word "EXCELANT". I would like to say as a traveling person, the trip that we had to Colombia was more than what we expected. Other than the beautifu..." read more
Traveled to Colombia as a group in October, 2021

Todd W.
California, United States
"In Bogota, I was very pleased with my guide Mafe, as well as the driver(s), and my guide Lina for a game of Tejo. In Medellin, I was also extremely happy wit..." read more
Traveled to Colombia solo in October, 2021

Claudia L.
Texas, United States
"We had a great time in Cartagena, all the activities planned by Margoth were thoroughly enjoyed. She hit on the nail with all her suggestions. Caro our chef..." read more
Traveled to Colombia as a family in September, 2021
P
Patricia V.
Texas, United States
"Natalia was awesome! I reached out to kimkim and provide details of the experience my group wanted to have in Colombia and Natalia delivered. We received a d..." read more
Traveled to Colombia as a group in November, 2019
Create your custom-made trip to Colombia
Get Started