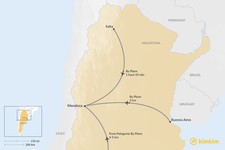 Mendoza is the capital of Argentina's wine region and is close to Argentina's border with Chile. It's the perfect jumping-off point to tour the nearby vineyards and taste the different wines produced there. You can also dive deeper and combine your trip to Mendoza with a tour of Chile's wine scene, or head north and discover the charms of Salta and Purmamarca with this 10-day itinerary.

Buenos Aires is a little over 600 miles (965 km) away from Mendoza, and the best way to travel from one to the other is to fly. Direct flights depart from both Ezeiza International Airport (EZE) and Aeroparque (AEP), Buenos Aires' local airport. If you're arriving from an international destination you will land at Ezeiza, and you can transfer directly to Mendoza from there. If you're leaving from Buenos Aires it's best to book a private transfer or shuttle bus to Ezeiza in advance and plan one to two hours (depending on traffic) to reach your destination. Shuttle buses leave from Puerto Madero to EZE every 30 minutes.

Flying to Mendoza from Aeroparque on the Costanera Norte is simple, as the airport can easily be reached by taxi or private transfer.

Learn more about traveling from Buenos Aires to Mendoza.

Duration: approximately 4 to 5 hours, plus travel to/from airports and layovers

There are no direct flights from Patagonia to Mendoza, and travel from both El Calafate and Bariloche includes a layover in either Buenos Aires or Cordoba. But connections in both cities are easy and layovers are usually short so traveling up to Mendoza from Patagonia is quick and painless, especially since both the Bariloche and El Calafate airports are close to the city.

Learn more about traveling from Bariloche to Mendoza.

Salta is almost 600 miles (965 km) north of Mendoza, and the two cities are connected by several weekly direct flights. You can also take an extra few days and plan a 6-day road trip, which gives you the chance to visit Cafayate and the Quebrada de las Conchas (Conchas Gorge) nearby.

Direct flights from Santiago to Mendoza, which is 110 miles (180 km) away, take around 55 minutes.

Driving through the Andes Mountains is also an option (and takes about 5.5 hours) and gives you the chance to see some spectacular views along the way. But frequent delays at the border and tricky driving conditions mean this option is not recommended.

This seven-day trip through Argentina is perfect for wine lovers. You'll...

This two-week escape to Argentina includes visits to a number of regions...

E
Enya A.
California, United States
"Everything was amazing and the guides, Andrea, Louis, and Lorena were just perfect! This was an incredible experience that we could not have done if not for ..." read more
Traveled to Argentina as a group in August, 2022
S
Sidney D.
Ohio, United States
"My friend and I had an amazing time in Argentina! Emilce was an amazing contact for us as we planned our trip, and then once there we always had a local cont..." read more
Traveled to Argentina as a couple in June, 2022