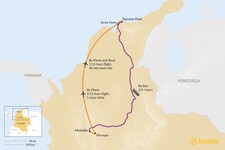 The distance between Medellín to Tayrona National Natural Park is 523 miles (843 km). To get to Tayrona, the first thing you have to do is get to Santa Marta, the nearest city to the park. The easiest way to make the trip is to fly from Medellín to Santa Marta, which takes about one hour and fifteen minutes with a direct flight. Going by bus is also an option—the route takes significantly longer (over 13 hours from Medellín to Santa Marta). Private transfers are recommended over self-driving, though it can be an expensive option at this distance.

If you have more time in the country, consider this 8-day itinerary—it includes visits to both Bogotá and Medellín, the two largest cities in Colombia. You'll also tour the white-sand beaches, coastline, and rainforests inside Tayrona National Park .

The airport that serves Santa Marta, Simón Bolívar International (SMR), is about 9 miles (14 km) south of the city. From here, book a private transfer for the drive to Tayrona. Taxis are also available at the airport, though some are not metered—be sure to sort your fare before departing.

By Plane and Boat

Duration: Less than an hour

Another less-popular but available option to get to Tayrona National Park from Santa Marta is to do it by boat. Fly to Santa Marta as detailed above, and take a taxi to the nearby village of Taganga, where a speedboat departs for Tayrona at least once each day. The (often bumpy) trip lasts about 40 minutes and leaves you directly in Cabo San Juan del Guia, a central hub in Tayrona (and one of the most beautiful—albeit crowded—beaches in the park).

There are no buses that leave directly to Medellín to Tayrona National Park—all buses leave from Terminal del Norte and drop off in Santa Marta, a tedious 13-hour trip (sometimes more).

After arriving in Santa Marta, you can catch the public bus from the Santa Marta terminal or from behind the central market in Santa Marta. They leave roughly every half hour. Buses operate all day and will take you directly to the park’s entrance. You'll arrive at the El Zaíno entrance and catch the shuttle bus to venture further into the park.

From the up-and-coming city of Medellín to the lush green mountains of...

Grace G.
Minnesota, United States
"So glad we used this service! COVID had really taken a lot of the fun out of planning trips since there was so much uncertainty and so many restrictions to ..." read more
Traveled to Colombia as a couple in December, 2021

Jamie L.
Michigan, United States
"My 16 year old daughter & I took a trip to Cartagena, Colombia this past summer. I was a little nervous about a trip like this with just us , but the help p..." read more
Traveled to Colombia as a couple in June, 2021

Simon K.
New Jersey, United States
" In one word "EXCELANT". I would like to say as a traveling person, the trip that we had to Colombia was more than what we expected. Other than the beautifu..." read more
Traveled to Colombia as a group in October, 2021
Create your custom-made trip to Colombia
Get Started