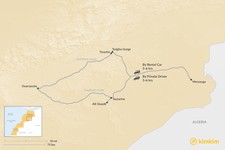 When traveling from the Saharan town of Merzouga to the city of Ouarzazate at the foot of the Atlas Mountains, travelers will be passing through desert towns and striking topography. Although there are no trains or planes that will take you from Merzouga to Ouarzazate, the necessity of traveling by car means that you will be able to stop at many of these points along the way. The only way to get there is by car.

Many travelers opt to hire a private driver or taxi to get them between Merzouga and Ouarzazate.

There are a considerable number of points of interest along the way between Merzouga to Ouarzazate to know about when determining which route you would like your driver to take. The routes are essentially equidistant, which means that travelers should select their routes based on which sites they would like to see.

The northern route offers the opportunity to stop at the spectacular Todgha Gorge, where you can marvel at the scenery, and take photographs. Also along the route is the city of Tinerhir - a town in the High Atlas Mountains, where you can stop for traditional Berber cuisine.

Along the southern route, you can plan to stop at Tazzarine, a desert town with palm groves and henna fields. Nearby, you'll find the prehistoric site of Aït Ouazik, where petroglyphs depict animals like buffalo, giraffes, and elephants. Further south, the Foum Tizza dunes are a striking blue and black color, and would be an excellent place to stop, explore, and photograph.

If you opt to call a taxi, your hotel in Merzouga can call you a "grand taxi" - a type of taxi that is meant to take travelers between different points in Morocco, outside of city centers. If you do not have a concierge, you will need to have a "petit taxi" (which can typically only hold three passengers, as opposed to the grand taxi's six passengers - who can take you to the grand taxi station.

Featuring a combination of culture, adventure, and relaxation, this...

This fast-paced 6-day trip highlights the best of Morocco, including...

P
Persephene S.
California, United States
"Our family really enjoyed our 12 day trip with Hassan all around Morocco. Before we left, Yassine helped us to design a trip that took into consideration a ..." read more
Traveled to Morocco as a family in April, 2022

Maryam S.
California, United States
"We had the most amazing time exploring Morocco with our guide (now someone we consider our friend and brother) Faysal! Not only is he so incredibly knowledge..." read more
Traveled to Morocco as a family in August, 2022

Tracy N.
Texas, United States
"Abdel, Said with Original Travels we’re so on point with all our bookings and excursions. They assigned us Samir our driver and all around caretaker. He was ..." read more
Traveled to Morocco as a family in August, 2022

Louis U.
Georgia, United States
"This was a trip of a life time. Morocco is a beautiful country and the people are friendly. We could have not planned a better trip on our own, and we’re..." read more
Traveled to Morocco as a group in June, 2022

Doug J.
Indiana, United States
"We loved Morocco… and KimKim made it the best it could be. Ilyace was our guide: Extremely professional and truly catered to all of our needs. Whenever w..." read more
Traveled to Morocco as a family in July, 2022
D
Diana N.
Australia
"Morocco was a trip that I will truly never forget. I was in Morocco for 9 days with my boyfriend and Karim was our personal driver. Not only was he our drive..." read more
Traveled to Morocco as a couple in July, 2022

Lynda W.
Canada
"A huge thank you to all the people involved in our amazing trip to Morocco 🇲🇦! First let’s start with Yassine who planned the whole trip! Thank you ! You li..." read more
Traveled to Morocco as a couple in July, 2022

Kelly K.
New York, United States
"We really enjoyed our 8 day trip around Morocco! It was extremely helpful to have Abdellah plan our itinerary. He listened to our priorities and made adjus..." read more
Traveled to Morocco as a couple in June, 2022

John K.
Canada
"First let me say that Megan is a true trooper and loves what she does and does it wholeheartedly. Aziz the guide who started and finished the Morocco tour ..." read more
Traveled to Morocco as a group in July, 2022
J
Jennifer B.
Illinois, United States
"My daughter and I typically do a "girls trip" to a different country every year. This year, we decided to visit a Morroco. I travel quite a bit - both profes..." read more
Traveled to Morocco as a family in June, 2022
Create your custom-made trip to Morocco
Get Started