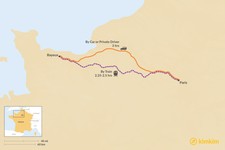 The best options for getting from Paris to Bayeux are taking the train or traveling by car. The two cities are just 163 miles (262 kilometers) apart, the roads are well-maintained, and trains depart regularly from Paris-Saint-Lazare Station (Gare Saint-Lazare)  for Caen and Bayeux in Normandy.

The fastest way to get from Paris to Bayeux is by train. SNCF Intercités trains connect Paris and Bayeux, making one stop in Caen, where you can see the Mémorial de Caen, a museum dedicated to France's role in World War II and post-war world history. If you are a history buff, consider buying train tickets that allow you to stop in Caen and resume your journey after you visit this museum, or think about exploring the Normandy coast on a 5-day itinerary that includes Bayeux, Caen, and Mont-Saint-Michel.

If you prefer to travel by car or private transfer, consider stopping not only in Caen, but also in Rouen, with its medieval historic center, Gothic cathedral, and Church of Saint Joan of Arc (Église de Sainte-Jeanne-d'Arc), a modern church built next to the site where Joan of Arc was executed in 1431. Other popular stops along the way include Giverny, where artist Claude Monet lived and painted, and the coastal town of Honfleur, a relatively short detour from the autoroute, or toll highway, between Paris and Bayeux.

Bayeux is also a gateway for the Normandy beaches of World War II fame. Omaha Beach and Arromanches-les-Bains are just a few miles away.

If you want to get from Paris to Bayeux quickly, take an Intercités train from Paris' Saint Lazare Station. Slower trains make more stops, but you will still get to Bayeux in less than three hours.

Duration: Approximately 3 hours, depending on traffic

While driving in Paris is challenging during peak traffic times, it is easy to rent a car at a Parisian train station or airport and drive to Bayeux and the Normandy coast. The fastest route to Bayeux is via the A14 and A13/E5 toll highways.

Paris has a complicated set of driving regulations aimed at reducing air pollution. If your car has a Crit'Air 5 sticker on the windshield, you may not drive it inside the boundary created by the A86 highway, which serves as Paris' outer "beltway." Cars with Crit'Air 4 stickers are prohibited in this area between 8am and 8pm.

One way to avoid driving in the Crit'Air zone is to rent your car outside of the zone altogether, perhaps in Caen, and drive from there, possibly as part of a 10-day trip to Paris, Normandy, and the Loire Valley.

Traveling via private transfer is another way to enjoy all the convenience of a car without the worry of driving in downtown Paris.

Spend ten days taking in some of the top treasures in France from north...

This 10-day itinerary is ideal for those seeking the splendor of French...

Jonathan S.
Florida, United States
"Isabelle put together a fantastic trip for us. It was a great mix of guided tours and museum visits on our own. The accomidations selected were nice and ce..." read more
Traveled to France as a couple in May, 2022

Jodi P.
Canada
"Our trip to France was over 2 years in the making due to COVID delays. The wait was totally worth it. Joel curated our trip to our exact specifications. ..." read more
Traveled to France as a couple in May, 2022