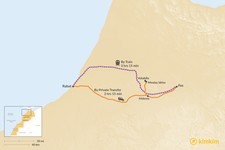 Those looking to get from Rabat to Fes have several options for completing the 129-mile (207 km) journey, which should take anywhere between two and three hours, depending on mode of transport. The most convenient option is to travel by private transfer, which should get you to Fes in a little over two hours.

Visit both cities in this 9-day itinerary starting in the Rabat, along with Chefchaouen, Fes, Marrakech, and Essaouira.

Traveling from Rabat to Fes by private transfer is easy and convenient, and has several interesting stops along the way you may wish to visit. Outside of Rabat, you will find the fascinating ancient Roman city of Volubilis, a UNESCO world heritage site and one of the best-preserved archeological sites in Morocco.

Onward a bit is the holy town of Moulay Idriss, which is one of the most important pilgrimage sites in the country—so important, in fact, that Muslims who cannot make the journey to Mecca in Saudi Arabia are allowed to visit Moulay Idriss instead. Non-Muslims can't enter the mosque, but the views from the mosque over the town and the valleys below are breathtaking, and even the outside of the mosque is a significant site to visit.

Further along is the city of Meknes, where you can find classical architectural splendor in the Bou Inania Madrassa and the Bab el-Mansour gate, as well as the Dar Jamai Museum, which showcases historic Moroccan crafts and textiles. Meknes' medina is also far less crowded and overwhelming than the one in Fes, so it's a nice way to get your bearings before journeying on to your final destination.

Those who would prefer to avoid the roads altogether and have a slightly more passive journey may want to consider taking the train between Rabat and Fes. The journey will take a little over three hours, with no transfers along the way.

Travelers should make sure to book first-class tickets, which will afford them a slightly more spacious train car, as well as the option to book their seats in advance, which will be helpful for those looking specifically to procure a window or an aisle seat.

This fast-paced 6-day trip highlights the best of Morocco, including...

Leonardo A.
Florida, United States
"Our driver, Abderahim, was most excellent and attentive to all our needs..very satisfied. Hakim, the tour operator was also very attentive with prompt repli..." read more
Traveled to Morocco as a couple in September, 2022

Jennifer O.
New Jersey, United States
"Overall we had an amazing experience planning and participating in our trip to Morocco where we visited Rabat, Chefchaouen, Fes, Merzouga, Boumalne Dades, ..." read more
Traveled to Morocco as a couple in September, 2022

Paul K.
Arizona, United States
"Sharon, just saying thank you for the extraordinary job you did planning our 50th anniversary trip is simply not enough. You really listened. The cities, mo..." read more
Traveled to Morocco as a couple in September, 2022

Linda B.
Idaho, United States
"Bravo KimKim! We give you a full 5 star review for our 9 day enriching experience! I can’t say enough about our guide Samir! He was kind, polite, and infor..." read more
Traveled to Morocco as a couple in September, 2022

Cynthia F.
North Carolina, United States
"First and foremost in making our 13-days encircling Morocco memorable was our driver Amine! While he demonstrated expert driving skills that made us feel com..." read more
Traveled to Morocco as a couple in September, 2022

Ashlyn F.
Colorado, United States
"We had a wonderful trip with Morocco Immersion Tours & Adventures! When booking, Sharon was quick to respond to all of our questions and help us create the p..." read more
Traveled to Morocco as a couple in September, 2022

Regina M.
Kansas, United States
"What an amazing trip. We were cared for in the most expeditious and courteous manner. We opted for the 10 day Luxury trip from Casablanca to Marrakech and ..." read more
Traveled to Morocco solo in September, 2022
Plan your trip to Morocco
Customize your trip with help from a local travel specialist
Plan Your Trip