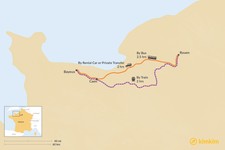 The charming Medieval city of Bayeux sits 82 miles (132 km) due west of the Norman capital of Rouen, between the rugged north Atlantic coast and verdant countryside of the Calvados region of Normandy in northwest France.

Renting a car and driving is the fastest way to reach Bayeux from Rouen, allowing freedom to explore the countryside and coast along the way. For a higher price, private transfers can offer all the flexibility of driving with added comfort and minimal stress.

Trains are an easy and efficient way to make the trip, connecting the cities in about two hours, but no direct service means one change in Caen. Travel by bus is a slower, affordable option, but with limited departures daily and no direct service, the train is usually a more comfortable choice.

To incorporate Rouen and Bayeux into a wider tour of Normandy, discover our five and seven-day itineraries of the region.

The fastest way to make the journey is by car, and choosing to self-drive offers travelers more flexibility in terms of sightseeing en route. If Bayeux is serving as a base to explore the Normandy coast and nearby WWII historic sites, a rental car also makes getting around the area far easier.

The quickest route from Rouen to Bayeux is via the A13/N13, which heads due west, skirting Caen before reaching Bayeux in just under two hours. It’s a straightforward, well-marked drive on major autoroutes and smaller national highways.

For those looking to slow down and explore northwest Normandy along the way, there’s plenty of opportunities for quick detours north of the A13 to the coast, where picturesque resorts and fishing villages like Honfleur and Deauville are under 30 minutes away. To the south of the autoroute, drivers can incorporate a loop into the region’s lush countryside, where charming half-timbered medieval towns like Beauvron-en-Auge are dotted along Calvados’s famous cider route.

The widest variety of rental car carriers in Rouen can be found adjacent to the train station, with further locations dotted throughout the city. Once in Bayeux, parking is relatively easy, with well-marked paid lots dotted around the city.

For those looking to tour the area in comfort, private transfers are also available, offering all the perks of driving with none of the hassles.

The train is an efficient and comfortable way to make the journey, but with no direct routes from Rouen to Bayeux, the trip requires a connection in Caen.

SCNF regional trains leave Rouen’s central Gare de Rouen-Rive-Droite station every three hours and arrive at Gare de Caen in under 1.5 hours. From there, travelers can catch a connecting train to Bayeux in just 15 minutes.

Bayeux’s station is convenient and walkable, with the historic center just 1km (an easy 15-minute stroll) away. Tickets can be bought in person or at kiosks at the stations.

If the plan is to rent a car upon arrival, it’s best to disembark at Caen (where there are several rental companies opposite the station) and drive the remaining 25 minutes to Bayeux. Rental car options in Bayeux are very limited, and the larger city offers better prices and choices.

The bus is the most affordable way to travel between Rouen and Bayeux, but also the longest, making the train a more comfortable choice for most.

The journey requires two steps: a Flixbus from Rouen to Caen, taking just under two hours, then switching to a local SCNF bus for the final 25-minute leg to Bayeux.

Flixbus tickets can be bought online, and buses leave from the stop on Avenue Champlain in central Rouen, but only depart 1-2 times a day.  Buses arrive and depart Caen from just outside the Gare de Caen train station, and local SCNF tickets can be bought at the station, where buses depart hourly for Bayeux. Arrivals at Gare de Bayeux are within easy walking distance to the city center.

This epic trip loops around three beloved regions in France with a nice...

History buffs will love this Northern France itinerary, which spans an...

You will be delighted by this trip in Paris, Normandy, Bordeaux and the...

Spend two weeks exploring the highlights of western France, from the...

Spend sixteen days exploring everything western France has to offer,...

View art in Paris, enjoy beaches in Normandy, and taste oysters in...

If you have a week and want to explore western France, this quick road...

A
Aaron M.
Colorado, United States
"Valentine did a great job in communicating with us in the mornings (as she is based in France). She picked beautiful boutique hotels with delicious breakfast..." read more
Traveled to France as a couple in September, 2022

Barbara H.
Illinois, United States
"Honestly can't say enough about using your services for this family trip! The tour guides were all amazing and so knowledgeable - Fabio in Paris, Ange for Ve..." read more
Traveled to France as a family in July, 2022
A
Ahmed A.
the United Arab Emirates
"The whole team was very cooperative and great Always got back to me in time to renegotiate certain things I wanted to adjust in the trip (not that there wer..." read more
Traveled to France as a couple in June, 2022

Lyon K.
Singapore
"Truth be told, we took a leap of faith when we engaged KimKim.com for our honeymoon in Southern France, because no one around us had heard of KimKim.com befo..." read more
Traveled to France as a couple in July, 2022
Create your custom-made trip to France
Get Started