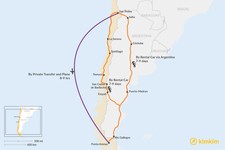 There are 2,625 miles (4,225 km) between San Pedro de Atacama in Chile's northern Atacama Desert to Punta Arenas, Chile's most southerly city and one of the most southerly cities in the world. People come to Punta Arenas in order to experience the surrounding wilderness of southern Chile and Chilean/Argentine Patagonia. The city has one of the most convenient airports in the extreme south of South America. It also has a lot of culture and history in its own right.

The options for travel to Punta Arenas are by air and by road. Travel by air always involves first a journey from San Pedro de Atacama to Calama, with the nearest airport.

By Private Transfer and Plane

Chile is of course a great driving country with such huge distances between destinations. And the trip from San Pedro de Atacama to Punta Arenas is one of the greatest journeys. It is so great, in fact, that the best way to get there in fact involves heading into Argentina for much of the route, because the south of Chile between Punta Arenas and Chilean destinations further north is covered by lakes and lacks drivable roads. Because of the huge distances and remote scenery, allow plenty of days for a trip like this.

The quickest driving route, with a direct travel time of around 50 hours solid, heads almost immediately into Argentina. It runs via the appealing destinations of Salta (good for experiencing traditional indigenous culture and customs, as well as stunning desert scenery), Córdoba (a cultural capital of Argentina with access to the rich pampas or grasslands of Argentina), Puerto Madryn (with some of the continent's best whale watching nearby) and Río Gallegos. The route then crosses back into Chile to reach Punta Arenas. Allow a week to do the route and some justice to the land you are passing through.

The slightly longer but arguably prettier route spends more time in Chile, heading via La Serena, Santiago and Temuco in Chile before crossing the mountains to San Carlos de Bariloche in Argentina, then Esquel before joining the previous route down through Argentina at Comodoro Rivadavia. Of these stop-offs, La Serena (a beautiful leafy city with the great side trip of the captivating Valle del Elqui), Santiago and San Carlos de Bariloche are all worth spending an average of 2-3 days each in. See more on the wine region around Santiago or the wild countryside treks around Bariloche. Again, allow a minimum of one week to do the route and some justice to the land you are passing through.

Romkaew B.
Massachusetts, United States
"Nicholas’s trip preparation for us was fantastic. We got to see what we wanted from the lake region to Patagonia to Iguazu Falls within our budget. The ..." read more
Traveled to Chile as a family in December, 2019
Plan your trip to Chile
Customize your trip with help from a local travel specialist
Plan Your Trip