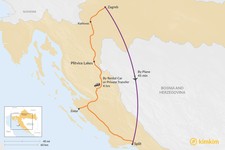 Flying and driving are the preferred methods to cover the 255 miles (410 km) between Zagreb and Split because these allow for the most comfort, efficiency, and flexibility.

Flying between the Croatian capital and Split is best for direct, quick transfers. Driving down to the coast, however, is best for seeing multiple cities and sights along the way for more leisurely travel.

Bus and train travel are both possible, but less convenient. There are 50 bus departures daily and two train departures, one of which is overnight. Either form of travel between the two cities requires at least seven to nine hours.

For trip inspiration, consider a 14-day itinerary that covers the best of Zagreb, Split and stops in between like Plitvice Lakes National Park. Another option is to cover the best of both Croatia and Slovenia with this 14-day trip.

There are quite a few major car rental companies in Zagreb. Automatic cars are more expensive to rent, but it is possible to rent manual or automatic vehicles. Gas is expensive in Croatia because it is bought by the liter, which is only a quarter of a gallon.

The highway route along E71 and D1 is the fastest, requiring around four hours. The motorway runs through rolling farmland and countryside, making it a pleasant drive. Plitvice Lakes National Park is located roughly halfway between Zagreb and Split, which is a nice place to stop for sightseeing. Check out this article for suggestions on ways to explore Plitvice Lakes National Park. Another potential stop is in Zadar, which is a short detour from the highway. Two good restaurant options in Zadar are Trattoria Mediterraneo and Pet Bunara, located minutes from each other in Old Town Zadar. If you decide to head into Old Town Zadar,  it's best to first find parking along the city walls, as you're mostly not able to drive into the heart of the Old Town.

There are tolls, so have kuna (local currency) on hand to pay the fare for each direction you plan to travel. Keep in mind that traffic on the motorway as well as near cities can contribute to longer travel time, especially during peak season. If traveling in the summer, consider taking A1, which is a former national road that sees little traffic now that the highway is open.

If you prefer not to rent a car, private transfers can be booked between Zagreb and Split. Selecting a private transfer provides more control over your schedule. You can book this as part of a broader tour itinerary, and having a local driver is great for getting additional information and suggestions at sights and stops along the way.

Flying between Zagreb and Split is by far the best and most comfortable option for direct transfers. Flights are relatively inexpensive and provide efficient and convenient transportation from the capital to the coast. Croatia Airlines operates non-stop flights on small prop planes, which make the trip daily throughout the year.

Dubrovnik and Plitvice Lakes National Park, two of Croatia's most...

The easiest and quickest way to travel to Dubrovnik is to fly: Dubrovnik...
Getting Around Croatia

Judy T.
Utah, United States
"Robert arranged a perfect 2-day introduction to Croatia. We are looking forward to continuing our adventure next week. Bruno, our excellent guide and driver,..." read more
Traveled to Croatia as a group in May, 2022

Alexandre A.
Japan
"Fabulous 5 days trip in Croatia, Dubrovnik - Split - Hvar - Ston and Peljesac peninsula, planned at perfection by Robi! We were amazed by the scenery, the ..." read more
Traveled to Croatia as a family in May, 2022
M
Minh H.
Canada
"Croatia trip was amazing. Almost all of the accommodations were upgraded during our trip. All breakfast was paid for. The car was arranged and didn't have an..." read more
Traveled to Croatia as a couple in April, 2022