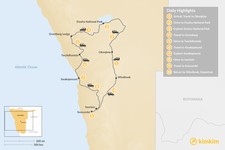 Seeing the top highlights of otherworldly Namibia on this guided 10-day tour. Climb ancient sand dunes at dawn in Sossusvlei, see German-colonial architecture in coastal Swakopmund, and visit rescued cheetahs at the Africat Foundation. And of course, enjoy two days of safari in Etosha National Park—the best place in the world to see an endangered black rhino.

Welcome to Namibia! From Windhoek, you'll travel north toward Okahandja, where you'll visit Namibia’s largest wood carving market.  The market is operated via a local co-op and is one of the best places to shop for authentic souvenirs. Continuing through farmland to Okonjima, where you'll relax before the afternoon’s activity.

Okonjima is the home of the Africat Foundation, a specialist conservation concern focusing on the African big cats.  You'll take an afternoon tour of the property, including a chance to view the cheetahs that are part of the Africat rehabilitation program.   Most of the animals here have been rescued from desperate situations, being orphaned or caught in a trap— the aim of the rehabilitation process is re-introduction into the wild.

After the tour, return to camp for dinner under the African stars.

Start early this morning—you're headed to Namutoni Camp in the eastern part of Etosha National Park. Arrive in time for lunch, and take a late afternoon game drive. Among the many species of wildlife in the park, you may spot elephants, zebra, leopards, and lions. Etosha is also the best place in the world to spot endangered black rhinos.

Today you'll enjoy a full day of game drives. Head toward Halali camp, stopping at several waterholes for wildlife observation and splendid views of the massive Etosha Pan.  The game viewing is usually excellent and you'll have the chance to tick off a few new species that are not normally seen on the Namutoni side of the park. Stop at Halali for a rest and a leisurely lunch.  There is time to visit the Halali waterhole and to make use of the swimming pool and bar facilities before continuing on our way and game driving down to Okaukuejo.

Okaukuejo is famous for its waterhole, which has been described as one of the best game viewing opportunities in Southern Africa—this is where you'll be spending the night.  Situated on the doorstep of our campsite, black rhino, elephant, lion and numerous species of antelope are usually seen.

Say farewell to Etosha and make a short morning trip to the small town of Kamanjab. Pay a visit to the nearby Himba Village—the only traditionally functioning Himba community outside the far north Kaokoland region. The tribe migrated here, with lifestyle and customs intact, and continue to follow a traditional way of life. The exact location of the site varies, as the Himba are semi-nomadic. Learn about marriage customs, traditional food, and the Holy Fire religion.

From here, it's a short drive on to the Hoada Community Campsite which is located among beautiful granite hills and mopane trees. To add an eco-friendly touch, the hot water system works in combination with the barbecue area—while your meal is being prepared, your water will be warmed up for your shower! Spend a cozy night camping under the stars.

Today, head into one of the most beautiful desert regions in Namibia, Damaraland.  Drive west via the Grootberg Pass and then take a detour to visit the ancient Bushman rock engravings at Twyfelfontein.  A local guide will provide a short guided tour before camp is set up for the night.

From Tyfelfontein, head deeper into the desert and pass Namibia’s highest mountain, the Brandberg.  Back on the road for more beautiful Damaraland scenery, make a stop in the small mining town of Uis, one of the best places to buy semi-precious stones for which Namibia is famous.  Here, rough Amethyst, Tourmaline, and more can be found at bargain prices.

Cross the “gravel plains” toward the Skeleton Coast, stopping to visit the seal colony at Cape Cross.  At certain times of the year there can be as many as 100,000 congregating Cape Fur seals.  Arrive in Swakopmund, Namibia’s premier seaside town. Founded in 1892 during German colonial rule, it served as the territory’s main harbor for many years.  Today, this town straddles the desert and the Atlantic ocean, enhanced by lush green lawns, palm trees, and carefully tended public gardens.  Architecture from a bygone era adds to the time-out-of-place atmosphere of Swakopmund.

Explore Swakopmund at your own pace today.  With shopping, a good stretch of beach (though the Atlantic here is quite cold), and an open-air curio market, this seaside town makes for a pleasant stop.  Swakopmund is also home to a very good museum and the Namibian National Marine Aquarium.

If you're in the mood for something more active, there's plenty of adventure to be had just outside of town. Take a flight over the desert, book a fishing trip from the beach or on the water, ride a quad bike over the desert sand dunes, take a bird-watching tour, and more—adventure seekers can even go sky-diving.

Head about 25 miles south to Walvis Bay,  where you'll spend the morning touring a large marine lagoon which is home to a vast array of marine bird life—and specifically, flamingos. Get back on the road across the endless Namib gravel plains, finally reaching the mountain desert. You'll traverse both the Kuiseb and Gaub passes—both require driving to riverbeds at the canyon bottoms before making the steep climb back up to spectacular panoramas.

Again, the scenery changes as you make your way down to the dune fields. Cross open savannah and farmland before the terrain begins to give way to the immense red sand dunes of the Namib Desert. From here, it's only a short distance to our next stop: the truly tiny town of Solitaire, a quirky outpost decorated with colorful out-of-commission cars from a bygone era. Arrive at camp during the late afternoon, where you'll have dinner and watch the distant mountains glow in the changing light.

Rise early for an excursion into the Namib "Sand Sea", including the famous Sossusvlei dune belt. This area has some of the highest known sand dunes in the world. Sossusvlei is situated at the end of the Tsauchab River, a dry riverbed that only flows in the years of exceptional rainfall.

Sossusvlei is a word from Nama descent, which directly translated means "a place with many endings." Many visitors to Namibia say that no part of the desert is more stunning than Sossusvlei, with its monumentally high dunes, the shadows of their sinuous crests continually changing as the day waxes and wanes. The warm tints of the sand, ranging from pale apricot to brick orange and deep red, contrast vividly with the dazzling white surfaces of the deflationary clay pans at some of their bases.

An optional afternoon excursion to the Sesriem Canyon, a small and picturesque canyon carved over millions of years into the Tsauchab River, may also be included today.

After breakfast, head back to Windhoek via Solitaire and the Khomas Hochland Mountains. Spend one last night in the capital before your departing flight.

Plan your trip to Namibia

Plan your trip to Namibia

Seeing the top highlights of otherworldly Namibia on this guided 10-day...

Take a ten-day road trip to Namibia and Botswana's top parks on this...

"Chasing the light", a photographer's true calling, has never been this...

Enjoy the highlights of Namibia at your own pace with this 10-day loop....

Seeing the top highlights of otherworldly Namibia on this guided 10-day...

Take two weeks to check out Namibia and Botswana's varied landscapes and...

On this self-guided tour of Namibia, you'll encounter the country’s most...

Kimkim has selected the best Namibia travel agents so you'll have a...

Perfect for first-timers to Africa, this two-week road trip explores the...

Enjoy the highlights of Namibia at your own pace with this 10-day loop....

Often called 'Africa for Beginners', this 8-day road trip is a great...

See the highlights of Namibia on a weeklong road trip that offers you...

James S.
Ethiopia
"As someone who usually prefers to make all of my own travel arrangements, I was hesitant to use Kimkim for my recent trip to Namibia. The Kimkim team and Pet..." read more
Traveled to Namibia solo in April, 2021
W
Wayne J.
New Zealand
"A big thank you to the KimKim team for the planning, organisation and great communication that went into making our 5 weeks in Namibia a truly memorable trip..." read more
Traveled to Namibia as a couple in November, 2018
Plan your trip to Namibia
Customize your trip with help from a local travel specialist
Plan Your Trip