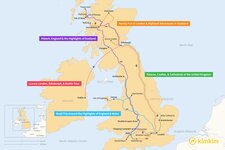 In 10 days, you can travel the length and breadth of England. Visit Big Ben and Westminster Abbey, plus icons like Buckingham Palace, Windsor, and Edinburgh Castle. Take the family on city tours of London, train rides in the countryside, and adventures in the Scottish Highlands—or hit the road to Stonehenge, Wales, and the Cotswolds. And if you enjoy the finer things in life, a luxury tour of the UK awaits.

Itinerary #1: Road Trip Around the Highlights of England & Wales

Embark on a 10-day road trip around southern England and Wales as you visit Stonehenge, the Cotswolds, Shakespeare's hometown, the Welsh coast, and more.

The adventure begins at the Neolithic monument of Stonehenge. After a tour to learn its secrets, you'll head to the nearby city of Bath to tour its stunning Georgian architecture, 1st-century Roman Baths, and the literary legacy of one of Regency England's most famous writers: Jane Austen. After a day trip to Glastonbury to hear some Arthurian legends, you'll hop in a car for a two-day road trip in the incomparable Cotswolds region. This protected area of England spans six countries and is known for its unspoiled countryside and charming cottage homes.

The splendor of England doesn't end there, as, on day five, you'll stroll the well-manicured gardens at Hidcote Manor, followed by a stop in the medieval village of Stratford-upon-Avon to see where William Shakespeare was born. Then it's off to Wales, a country known for its incredible coastline and historic castles. Afterward, head to London for more Shakespeare with a visit to his historic Globe Theatre and cap the evening with a rooftop film screening. The trip culminates with a tour of London's most famous sights on an open-topped bus, followed by high tea at the landmark Savoy Hotel. Learn more

This 10-day tour of London's royal heritage includes everything from Buckingham Palace and Windsor Castle to the hallowed halls of Oxford University and even Scotland's Edinburgh Castle.

This jaunt through the pomp and history of the UK starts in London, where you'll see famous landmarks like Piccadilly Circus and Trafalgar Square, home to the National Gallery art museum. The next day, you walk in the footsteps of royalty when you visit Buckingham Palace, Westminster Abbey, and St Paul's Cathedral, where Princess Diana married Prince Charles. After a visit to the 1,000-room Windsor Castle, you'll travel to the historic city of Cambridge. Here you'll tour not only the venerable university but also sample award-winning wines from Chilford Hall Vineyard.

Then it's off to the rural countryside to tour the 11th-century Ely Cathedral, a marvel of Romanesque and Norman architecture. The trip will take you far north on day seven to Edinburgh, where you can walk the Royal Mile (the city's main thoroughfare). Also, here is the 289-room Holyrood Palace, the official residence of the British monarch in Scotland, which you'll get to visit. On day nine, take a guided tour of the 12th century Edinburgh Castle and see the Royal Apartments, Great Hall, and Scottish Crown Jewels. The next morning transfer to the airport for your flight home. Learn more

Plan your trip to United Kingdom
Customize your trip with help from a local travel specialist.
Plan Your Trip

This 10-day journey through the UK covers a variety of unique highlights in England and Scotland, including countryside road trips, football stadium visits, architecture tours, whiskey tastings, and more.

Get ready to see the most beautiful and ancient sites in the UK. It starts back in the 1st century with England's famous Roman Baths. The journey continues with a Jane Austen tour of Bath plus stops at filming locations for the TV series "Bridgerton." Then it's off to Glastonbury (the purported burial place of King Arthur) and a tour of Shakespeare's hometown before hitting the road north to Manchester. You'll travel along the Cotswolds Trail and pass through medieval villages like Bourton-on-the-Water. In Manchester, you'll visit Old Trafford stadium, the hallowed ground for Mancunians.

Continue north to Scotland and tour the metropolitan gem of Glasgow. There's much art, culture, and history here. Over two days you'll admire classic architecture like the 12th-century Cathedral, the Necropolis, and the Glasgow School of Art. Then head west to the Isle of Skye, an island as famous for its otherworldly landscapes as it is its premier whiskeys. For a couple of days, you'll sample fine single malts paired with artisanal chocolate and visit incredible landmarks like Kilt Rock, the Old Man of Storr, and the Black Cuillin Mountains. On day 10, you'll transfer to Edinburgh for your flight home. Learn more

Take the entire brood on a 10-day family tour of the UK that includes the highlights of London, palace and castle visits, "Harry Potter"-themed city walks, and even a trip on the famous Hogwarts Express.

Kick things off with a ride on an open-topped tour bus that passes Buckingham Palace, Sea Life Aquarium, and Madame Tussauds. Then take the family on a "Harry Potter" tour and stroll down Diagon Alley, visit the Leaky Cauldron, and stop at Gringotts Wizarding Bank. After visiting the 17th-century Kensington Palace and 11th-century Windsor Castle, you'll head west to Bath and Stonehenge. Return to London for a visit to the Globe Theatre, tea at the lavish Savoy Hotel, and a stop at the 11th-century Tower of London, a prison fortress where some of Henry VIII's wives met their end.

Then hop on a first-class overnight train to Edinburgh and hit the ground running with a delicious food tour of the city. Venture into the gorgeous Scottish Highlands to see ancient castles used as filming locations for the hit TV series "Outlander." After a free day in Edinburgh, take the family to legendary Loch Ness for a mythical safari to spot the monster. On day nine, everyone will board the Jacobite, a historic steam train that runs along Scotland's west coast and features scenery so beautiful both it and the engine were featured in the "Harry Potter films. The next day you'll return to Edinburgh and depart. Learn more

Enjoy the good life when a personal driver meets you at the London airport and whisks you off to your luxurious hotel. Hit the road on a private driving tour to see icons like Big Ben, the Tower of London, and Buckingham Palace. After enjoying high tea in an elegant hotel, you'll board a high-speed train to Edinburgh. Here, another chauffeur will drive you around the main attractions like Old Town, Holyrood Palace, and Arthur's Seat, a volcanic hill overlooking Edinburgh. Your Scotland experience ends with a visit to Edinburgh Castle and a guided "ghost walk" in the ancient catacombs beneath the city.

Then, on day seven, you'll jet off to Dublin for a few days touring the streets of Ireland's capital in style. After your personal driver transfers you to your hotel, spend the day strolling the banks of the River Liffey and walking over lovely bridges like Ha'penny. The next day you'll take a private walking tour of highlights like the 13th-century Dublin Castle, 16th-century Trinity University, and the Temple Bar District, Dublin's "cultural quarter" (i.e., nightlife area). On day nine, you'll head to a top distillery for a sampling of fine whiskeys, and the next morning you'll depart. Learn more

Looking for more inspiration for your trip to the UK? Check out these other UK itineraries, with outdoor adventures, cultural trips, and best-of tours to hit the highlights.

Experience the best of England's natural wonders and historic highlights...

Explore the ancient history and modern culture of northeast England....

January is a good time to visit the United Kingdom if you enjoy indoor...

February is winter in the United Kingdom, and that means short days and...

March is the beginning of spring in the United Kingdom, although winter...

April is spring in the United Kingdom, and the country's famous flower...

The United Kingdom in May: Travel Tips, Weather & More

Kimkim has selected the best United Kingdom travel agents so you'll have...

With July, August is the warmest and busiest month in the United...

September is the start of the quieter shoulder season in the United...

Best Time of Year to Visit the United Kingdom

The weather in the United Kingdom is increasingly cold in November, and...

Judy B.
Georgia, United States
"Kate was wonderful. Having her a text or call away averted lots of averted frustration. The emergency number was appreciated, as well. I knew that no matt..." read more
Traveled to United Kingdom solo in September, 2021
Plan your trip to United Kingdom
Customize your trip with help from a local travel specialist
Plan Your Trip