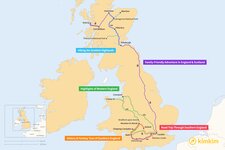 A week is long enough to experience not only the highlights of London but also the English countryside and Scottish Highlands. One option is a family tour that will take you and the clan to Buckingham Palace, on "Harry Potter" tours, and boat rides on Loch Ness. If you're jonesing for outdoor adventure, consider a weeklong hike in the wilds of Scotland's Cairngorms National Park, or hit the road on a trip through the incomparable Cotswolds region of southern England.

Wrangle the kids for a week of fun that includes the highlights of London, Scotland, and rural England.

There's no time to waste because, upon arrival in London, you'll hop on an open-topped bus to see famous sights like Buckingham Palace, Westminster Abbey, Big Ben, and Piccadilly Circus. Cap the day with a film screening on a rooftop amid London's iconic skyline. The kids will love a "Harry Potter"-themed walking tour around London's alleyways, the Globe Theatre, and Diagon Alley. Following a ride on the River Thames, you'll visit Kensington Palace, home of the Duke and Duchess of Cambridge. Then you'll tour the 11th-century Windsor Castle, the oldest and largest inhabited castle in the world.

Next, head to the city of Bath, famous for both its ancient Roman Baths and for being the home of Jane Austen. The day ends with a journey to the Neolithic monument of Stonehenge. Then enjoy a first-class train trip north to Edinburgh and sample incredible cuisine on a foodie tour. A wildlife safari is next as you venture into Cairngorms National Park to spot exotic animals like the elusive red deer. On day six, you'll hop on the historic Jacobite steam train to experience some of the Scottish Highlands' most incredible scenery, followed by time spent on legendary Loch Ness. On day seven, you'll depart Edinburgh. Learn more

This seven-day adventure in southwest England covers historic regions like the Cotswolds plus locations used in the filming of popular TV series and movies like "Bridgerton" and "Harry Potter."

From London, transfer to the southwestern city of Bath, a UNESCO World Heritage Site. Over two days, you'll immerse yourself in its history on a Jane Austen-themed walking tour, plus stops at the incredible Georgian buildings used in the filming of the hit Netflix series "Bridgerton." You'll travel to another UNESCO site on day three: the Cotswolds. This unspoiled bucolic paradise is home to historic medieval villages and stunning landscapes—overnight in a charming B&B in Moreton-in-Marsh, one of the most romantic villages in the northern Cotswolds.

Get ready to spend time with raptors at the Cotswold Falconry Centre. You'll not only learn the secrets to the time-honored art of falconry, but you'll also fly these incredible animals yourself. After touring the well-manicured gardens of a historical manor, you'll visit the 11th-century Oxford University. Here you'll see some locales that served as inspiration for the "Harry Potter" books and movies, like the medieval Divinity School. On day six, tour Oxford's Bodleian Library before ending the week with a leisurely ride down the River Cherwell on a flat-bottomed boat. On day seven, you'll return home. Learn more

Plan your trip to United Kingdom
Chat with a local specialist who can help organize your trip.
Get Started

Hit the road over seven event-filled days as you visit the most historical regions and cities in southern England, plus take a VIP tour of Stonehenge.

From London, transfer to the medieval city of Oxford and go punting down the River Cherwell. There are many beautiful sights on the riverbanks, like the Botanic Garden, the fields of Magdalen College School, and the gardens of St. Hilda's College. On day two, head to the town of Chipping Campden, which will be your base for two days of excursions into the Cotswolds. First up is a horseback ride down bridleways offering stunning countryside views, then perhaps a walk from Chipping Campden to Broadway Tower, an 18th-century folly on a hill overlooking the Cotswolds.

Drive the southern-loop portion of the scenic Cotswolds Discovery Trail on day four. Your included trail pack will point you to sights like ancient Roman amphitheaters, the historic towns of the Coln Valley, and the stunning hilltop village of Minchinhampton. End the day in Bath, whose Circus and Royal Crescent are known for their rows of Georgian townhouses. On day five, you'll visit the Roman Baths and enjoy a personal spa treatment. After a stroll around the 18th-century Sydney Gardens, you'll take a VIP tour of Stonehenge. The following day transfer to London for your flight home. Learn more

This epic week-long hike through Scotland's Highlands and national parks is perfect for anyone who wants to challenge themselves amid the world's most wild and beautiful landscapes.

You'll arrive in Edinburgh and warm up for your long-distance hikes with a self-guided walking tour of the city. See historic landmarks like the 12th-century Edinburgh Castle, and admire the Gothic architecture as you stroll down the Royal Mile to Holyrood Palace, the home of the British monarch in Scotland. The next day, leave Edinburgh for Inverness, the capital city of Scotland's Highlands region. From here, you'll visit the 14th-century Cawdor Castle and take a boat tour of Loch Ness.

Then it's off to rugged Cairngorms National Park. The UK's largest national park is filled with towering mountains and Caledonian Forest and is home to wildlife like the Scottish wildcat and mountain hare. Spend the first day hiking Speyside, an area known for its whiskey distilleries. Then head to Abernethy National Nature Reserve, a protected area home to over 70 species of birds. You'll learn about re-wilding programs at the Glen Fishie private nature estate and then enjoy additional hikes around wooded glens and lochs in Trossachs National Park. On day seven, you'll return home. Learn more

Spend a week discovering the countryside of western England, including a trip through the Cotswolds, visiting Bath, tours of the Welsh coast, and a one-of-a-kind Beatles experience in Liverpool.

On day one, head from London to Bath. After "Bridgerton" and literary tours of its most famous Georgian locales, you'll hit the road on the Cotswolds Discovery Trail South. This is a self-drive tour in which you can visit any village you like plus see Roman archeological sites like villas and amphitheaters. On day four, head north on the Cotswolds Trail, where you can stop at Neolithic monuments and picture-postcard villages like Bourton-on-the-Water. You'll eventually arrive in Stratford-upon-Avon, another medieval village famous for being William Shakespeare's birthplace.

Then continue north to Wales. This country is known for its stunning coastline, which you'll see when you arrive in the port town of Conwy. You'll also visit three 13th-century castles: Caernarfon, Conwy, and Beaumaris. A walking tour reveals other historical gems like the Town Walls (medieval defensive fortifications) and the Smallest House in Britain, which is a mere 122 inches tall and 72 inches wide. Rock out on day six with a Beatles tour of Liverpool as a driver takes you to historic locales and offers anecdotes on the Fab Four. On day seven, you'll return to London and head home. Learn more

Looking for more inspiration for your trip to the UK? Check out these other UK itineraries, with outdoor adventures, cultural trips, and best-of tours to hit the highlights.

Make the Most of Your Time in United Kingdom

How Many Days to Spend in the United Kingdom

Explore the ancient history and modern culture of northeast England....

January is a good time to visit the United Kingdom if you enjoy indoor...

February is winter in the United Kingdom, and that means short days and...

March is the beginning of spring in the United Kingdom, although winter...

April is spring in the United Kingdom, and the country's famous flower...

The United Kingdom in May: Travel Tips, Weather & More

Kimkim has selected the best United Kingdom travel agents so you'll have...

The weather in the United Kingdom is increasingly cold in November, and...

September is the start of the quieter shoulder season in the United...

A Road Trip Through England & Scotland: From London to Lo...

Discover more about England and Scotland's food scenes, history, and...

Explore Scotland and England by road on this 14-day, self-drive tour....

Discover some of England and Scotland's most fascinating cities and...

Uncover the jewels of England's northeast coast as you travel through...

How Many Days to Spend in the United Kingdom

Joan D.
Illinois, United States
"I chose to work with KimKim travel based on a recommendation from my sister-in-law. Rachel and her team have been wonderful to work with, and helped me to pl..." read more
Traveled to United Kingdom as a group in October, 2022

Judith C.
Missouri, United States
"Eleanor made all the arrangements for our travel. Unfortunately, many of our visits were canceled due to the death of the queen. But Eleanor quickly gave sug..." read more
Traveled to United Kingdom as a couple in September, 2022

Christy L.
North Carolina, United States
"This was a last minute decision made for us to go to the UK for the first time. Rachel put together an amazing 9 day trip for us. Especially on such short no..." read more
Traveled to United Kingdom as a couple in September, 2022
L
Linda L.
California, United States
"Eleanor planned the most amazing trip for us in England!! We stayed in beautiful places; she recommended great restaurants and things to see and points of in..." read more
Traveled to United Kingdom as a family in August, 2022

Judy B.
Georgia, United States
"Kate was wonderful. Having her a text or call away averted lots of averted frustration. The emergency number was appreciated, as well. I knew that no matt..." read more
Traveled to United Kingdom solo in September, 2021
Create your custom-made trip to United Kingdom
Get Started