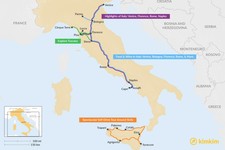 With two weeks in Italy, you can see many of the country's top sights in one trip—Rome, Florence, Venice, the Amalfi Coast—or spend your time exploring a particular region in depth, like Tuscany or Sicily. On these four unique itineraries, you'll take a pizza-making class in Naples, road-trip around Sicily, explore the wine-growing region of Chianti, or get a taste of several Italian cities, moving quickly between destinations on the country's network of high-speed trains.

This classic two-week trip plan features Italy's greatest hits: Rome, Venice, Florence, and Naples, plus a trip through Tuscany and an adventure along the Amalfi Coast.

Kick off the trip in Venice, where you'll spend the first three days and nights exploring the Floating City and the nearby islands of Murano and Burano. On the last evening, you'll take a gondola ride through Venice's famous canals. On day four, catch the high-speed train to Florence and enjoy a guided walking tour of the historic center. Side-trip to the Tuscan towns of Lucca and Pisa, then see Chianti wine region on a Vespa tour.

On the second week, you'll begin with a train ride to Naples, gateway to the Amalfi Coast. Relax in the seaside village of Amalfi, making excursions to the towns of Positano and Ravello. On day nine, you'll hike to Mount Vesuvius and see the ruins of Pompeii on a guided tour. The end of the trip is devoted to urban sightseeing in Naples and then Rome, where you'll have a guided tour of the Vatican Museums and the key monuments of the Eternal City, savoring leisurely meals in Trastevere and world-class gelato on an evening passeggiata (stroll). Learn more

Find out more about the ideal amount of time to spend in Italy here.

On this two-week itinerary, you'll enjoy Tuscany at a leisurely pace, visiting Florence, Siena, Lucca, and Pisa before hiking the Cinque Terre hiking trail in the nearby region of Liguria.

On this itinerary, you'll base yourself in three places—Florence, Siena, and Lucca—with side trips to a number of Tuscan villages. Begin in Florence, where after seeing Palazzo Vecchio and the Uffizi Gallery, you'll go on a truffle-hunting tour in the countryside outside the city. Detour to Pisa and it's famous Leaning Tower and take some time for shopping and relaxing in Florence before moving onto Siena. The city's historic center, a UNESCO World Heritage Site, is one of Italy's most popular attractions. Day-trip to the medieval towns of Montepulciano and Pienza on day seven, then spend a full day learning about Tuscan wine on a full-day tour of Montalcino and its family-run wineries.

In the second half of the trip, highlights include a tour and pasta-making class in the medieval city of Lucca, plus an excursion into the Italian region of Liguria for a full day of hiking the Cinque Terre. This dramatic stretch of coastline takes you through five villages, all part of Cinque Terre National Park. Unwind in Lucca on the last day, with free time for shopping, sightseeing, and sitting in outdoor cafés. Learn more

Interested in cycling in Tuscany? This six-day itinerary is just the ticket.

This indulgent two-week tour around Italy is custom-made for foodies and wine lovers. Taste Chianti in Tuscany, feast on thin-crust pizza in Naples, share tiramisu in Venice, and stroll around Rome with gelato: it's all part of the adventure.

You'll enjoy a mix of cultural sightseeing, eating, and drinking when you begin this trip plan in Venice. Between museum stops and gondola rides, you'll sample traditional tiramisu and other local specialties on a street food tour. Stop in the bustling Rialto Market to pick up some cheese and wine for a DIY picnic.

The following day, catch the train to Bologna. After checking out the 11th-century University of Bologna, one of the city's main attractions, you'll do another walking food tour with a local guide, stopping into pasta shops and bakeries to try artisanal tortellini, mortadella, and a variety of cheeses. Side-trip to Parma to try the region's traditional ham before moving onto Florence. Here, you'll be led around by a guide to the city's best off-the-beaten-path gelato and coffee shops, truffles, fresh-pressed Tuscan olive oil, handmade chocolate focaccia, and locally produced wine.

The following day, you'll venture into the Chianti wine region to visit family-run wineries. It's a good basis of comparison for the second part of the trip, when you'll travel to the Amalfi Coast and taste wines made there. Take a pizza-making class in Naples and finish up in Rome with a food and wine tour in Trastevere, one of the Eternal City's most charming neighborhoods. Learn more

Enjoy the luxury of time on this two-week road trip around Sicily. Instead of zipping between major cities and sights, you'll take your time exploring country roads and traditional villages in between stops in Palermo and Taormina—and you'll side-trip to smaller islands via hydrofoil.

Begin the trip in Palermo, where you'll have some time for sightseeing before day-tripping to Monreale and its extraordinary cathedral, considered the greatest example of Norman architecture in the world. Pick up your rental car on day three and drive to the seaside village of Scopello, gateway to the Zingaro Nature Reserve, famous for its crystal-blue water. After hiking and swimming, you'll move on to the Trapani region for a three-night stay in a wine resort. From Trapani, take a hydrofoil to Levanzo, the smallest of the Egadi islands, returning at the end of the day for wine and a leisurely meal at the resort.

On week two, drive along the coast to Agrigento for a guided tour of the archaeological site Valley of the Temples, then stay overnight at a farmhouse. You'll tour Villa Romana del Casale and a pair of baroque Sicilian towns on your way to Syracuse, where the itinerary includes a guided visit to the Neapolis Archaeological Park with its famous Greek theatre. Wrap up the trip with a hike to the summit of Mount Etna and a visit to the picturesque fishing village of Cefalù before returning to Palermo to catch a flight home. Learn more

Short on time? Try these ideas for one-week road trips around Sicily.

Get to the heart of Sicily on this 9-day road trip that explores cities,...

From high in the Dolomites to the shores of Lake Como, romance is in the...

While George Clooney's villa isn't open for guests, you can still live...

Traveling from Portofino to Pisa means a trip down the coast of the...
Getting Around Italy

Margaret L.
Canada
"Our vacation in Italy was well beyond our expectations. All of our requests were met and the guides were very knowledgeable, friendly and professional. Eve..." read more
Traveled to Italy as a couple in April, 2022

Terrence H.
California, United States
"Okay, this was the most amazing trip I have had in my entire lifetime. From the transportations to and from the airports and train stations to the fantastic ..." read more
Traveled to Italy as a couple in April, 2022

Donicastiles@Gmail.Com S.
California, United States
"My husband and I finally got to have our Italian honeymoon (2 years delayed thanks to Covid). Over 2 weeks we experienced Venice, Florence, Rome, Pompeii, Ra..." read more
Traveled to Italy as a couple in April, 2022

Tim Z.
Maryland, United States
"We starting planning this trip in 2019, then Covid. It was a long wait but worth it, we had an amazing time. All of our guides and drivers were incredible. O..." read more
Traveled to Italy as a couple in April, 2022
Plan your trip to Italy
Customize your trip with help from a local travel specialist
Plan Your Trip