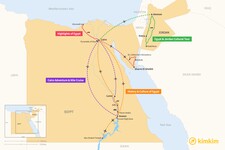 With a week to spend in Egypt, travelers have several great options. Try a highlights tour that takes you to Cairo, Alexandria, and the coastal resort of Sharm El Sheikh, or choose an itinerary that focuses specifically on history and culture, including a side trip to Aswan and the incredible rock-cut tombs at Abu Simbel. Alternatively, combine a few days of sightseeing in Cairo with a three-day boat cruise down the Nile. Or add Jordan into the mix, spending a few days in Egypt before crossing the border to explore Petra and Wadi Rum. Find out more about your options by reading the itineraries below.

On this well-rounded trip through Egypt, you'll see grand pyramids at Giza, admire Roman ruins in Alexandria, ride a camel in the desert, and go for a dip in the Red Sea.

Begin the tour in Cairo, visiting the Egyptian Museum to see precious artifacts and get an overview of Egypt's history and culture. On day two, you'll go to see the grand pyramids of Giza, then experience the charm of the Nile River at sunset while on a dinner cruise. Continue on to Alexandria, home to Roman ruins, the impressive Catacombs of Kom El Shoukafa, and the restored Library of Alexandria, a center of learning since ancient times.

Head to the coast for the second part of the trip. You'll base yourself in the resort town of Sharm El Sheikh, a gateway to some of the country's most beautiful outdoor attractions. Enjoy a safari day around Dahab, including a camel ride and a snorkeling excursion at Blue Hole, a sinkhole that's hugely popular with divers. Then you'll have a free day by the Red Sea. Enjoy a walk on the pedestrian promenade in Naama Bay, do some more snorkeling at Yolanda Reef, or stop at St. Catherine's Monastery to see the site where Moses is said to have received the Ten Commandments. Learn more

This weeklong journey starts with a few days of sightseeing around Cairo, then transitions into a cruise down the Nile River with stops at ancient temples and cultural sights along the way.

Kick off the trip in Cairo. You'll base yourself in the capital city for the first few days, visiting the Egyptian Museum, touring Islamic Cairo, and shopping for souvenirs in colorful marketplaces. You'll also side-trip to the pyramids of Giza and spend some time in Memphis, returning to Cairo at night to enjoy the city's souks, shops, museums, and bustling dining scene.

On day four of the trip, you'll take a domestic flight to Aswan, where you'll board a boat for a cruise down the Nile. Highlights along the next day's journey include the temples at Edfu and Kom Ombo. Day six is packed with sights, too, featuring stops at the Valley of the Kings to see rock-cut tombs for kings and powerful nobles (including Tutankhamun) and Hatshepsut Temple, the memorial of Queen Hatshepsut. Tour Karnak Temple, one of Egypt’s largest surviving temples, and the famed Luxor Temple, founded around 1400 BCE. You'll spend the last night in Luxor before heading back to Cairo to catch your flight home. Learn more

Take a deep dive into Egyptian history and culture on this busy weeklong trip around the country that includes visits to the gargantuan rock-cut temples at Abu Simbel, the Great Pyramid of Giza, Luxor Temple, and Aswan High Dam.

Cairo is the starting point of your trip. You'll stay in the capital city for two nights, sightseeing and side-tripping to Giza to see world-famous pyramids, then catch a domestic flight to Luxor on day three. Here, you'll visit Karnak Temple, one of Egypt’s largest surviving temples, and the world-famous Luxor Temple, which dates back to 1400 BCE. Move on to the Valley of the Kings and the Colossi of Memnon, where you'll see a pair of imposing statues of Pharaoh Amenhotep III originally meant to guard the temple's entrance.

The temples at Edfu and Kom Ombo, some of the best-preserved in Egypt, are next on the agenda. On day six, you'll take a short flight to visit a very special place: the massive rock-cut Abu Simbel Temples, built by the Egyptian king Ramses II, who reigned 1279–1213 BCE. Finish the trip in Aswan with a few more must-see sights, including the Aswan High Dam and Philae Temple, which you'll visit on a boat. You'll take a flight out of Aswan to end the adventure. Learn more

On this short but sweet 7-day itinerary, you'll spend a few days in Egypt and a few more in Jordan, taking in unforgettable cultural sights including the pyramids of Giza and the ancient city of Petra.

The adventure begins in Cairo. Spend a few days here, touring the Egyptian Museum, shopping in the souks of Islamic Cairo, and day-tripping to Giza and Memphis to see world-famous pyramids in person, including the Great Pyramid of Giza and the  Pyramid of Saqqara. Midway through the trip, you'll cross the border to Amman, Jordan, to start the second half of the journey.

On your first day in Jordan, walk around Jabal Weibdeh, the city's oldest neighborhood, stop into the King Abdullah II Mosque, dine in a shisha café, and see Dead Sea Scrolls on display at the Jordan Museum. Continue on to the ancient city of Petra, nicknamed "Rose City," where you'll hike through natural geological formations and climb to the top of the highest temple. Spend the last full day of the trip on a safari tour around Wadi Rum in a Jeep driven by a local guide. Relax in Amman on the last night of the itinerary before catching a flight out. Learn more

Looking for more inspiration for your trip to Egypt? Check out these other Egypt itineraries, with Nile River cruises, cultural trips, and best-of tours to hit the highlights.

Check off some of Egypt's most iconic sights on this diverse week-long...

Venture to the Great Pyramid of Giza, climb to the top of Petra's...

In just a week, this action-packed itinerary takes you to Egypt's top...

Enjoy the best of Egypt on this weeklong adventure. Spend a few days in...
Egypt 7-Day Tours & Itineraries

Make the Most of Your Time in Egypt

Five days in Egypt offers plenty of choices where most travelers want to...

With a week to spend in Egypt, travelers have several great options. Try...

Ten days is a perfect amount of time to spend in Egypt. With enough time...

Two weeks is a generous amount of time to spend in Egypt. With 14 days,...
Make the Most of Your Time in Egypt

Enjoy Egypt by land and sea on this lively 10-day tour. Start in Cairo...

The best weather in Egypt falls between October and March, and the peak...

Cultural highlights, river cruising, and a beach vacation combine on...

There's more to Egypt than the pyramids—this comprehensive 15-day...

Cruise deep into the heart of Egypt on this laid-back, 9-day itinerary....

S
Stefanie D.
Canada
"Our trip was amazing, we loved our cruise down the Nile and learning about the hieroglyphs in all of them temples. Our guides Mustafa and Mohammad were fanta..." read more
Traveled to Egypt as a group in June, 2022
F
Farrah M.
Canada
"We planned a trip exploring highlights of Jordan and Egypt, and it was made easy by Ibrahim and his team! They were flexible with itinerary changes and made ..." read more
Traveled to Egypt as a couple in June, 2022

John W.
Georgia, United States
"Our tour of Egypt organized by KimKim exceeded my expectations . Our guides weew always available beginning and ending at the airport security scanner, fr..." read more
Traveled to Egypt as a group in May, 2022

Lisa W.
Georgia, United States
"I recently used Kimkim to plan a very last minute trip to Egypt. I did have a list of sights to see but not much else. Sharif did the rest! He planned a very..." read more
Traveled to Egypt as a family in May, 2022