Venture to the Great Pyramid of Giza, climb to the top of Petra's largest temple, see Dead Sea Scrolls in person, go for a safari tour in Wadi Rum: these are just a few of the adventures that await you on this thrilling 7-day itinerary around Egypt and Jordan. Start with a few days in Cairo learning about Egyptian culture and history, then cross the border to Amman to begin your journey around deserts and Roman ruins.

Welcome to Egypt! After arriving in Cairo — one of the largest cities in Africa and in the Middle East — you'll head to your hotel. You'll be free to relax and rest, or you could also start exploring the city, venturing out to try some local cuisine in one of Cairo's many excellent restaurants.

After breakfast, you will meet your guide and travel to Giza, located outside of Cairo, where you will see the three major pyramids at its necropolis complex. Your guide will explain the history of the construction of the Pyramids of Giza: the Great Pyramid of Giza, Cheops, and the smaller Chephren and Mykerinos. Next, you'll head to Memphis, an ancient Egyptian capital, to see the Pyramid of Saqqara and the Pyramid of Djoser.

Today's activities include the Egyptian Museum, which has a substantial collection of ancient treasures, including the tomb of King Tut. Then learn about Islamic Cairo at the Citadel of Saladin See, an important example of military architecture from the Middle Ages, and the Mosque-Madrassa of Sultan Hassan, a monumental mosque that was built during the Mamluk period of the 1300s. Finally, hunt for treasures in Khan el-Khalili Bazaar, a souk in the historical center of Islamic Cairo, where you can shop for lamps, rugs, jewelry, and more.

Day 4: Cross the Border to Jordan

Today you'll catch a flight to Amman. Welcome to Jordan! You'll have some time this afternoon to explore this bustling capital city. Walk around in Jabal Weibdeh, the oldest neighborhood in Amman. There are lots of small side streets, shops offering local goods and produce to be explored, as well as many cafés and restaurants. Stop into the King Abdullah II Mosque and explore the Citadel with the Temple of Hercules, which offers a 360-degree view over Amman. It's best to be there during prayer time, as you'll hear the calls to prayers from the various mosques, creating a surreal echo.

Continue to the Roman Theater, and then browse through the downtown souks. Head to Rainbow Street in Jabal Amman, filled with shops, restaurants, and shisha cafés. Finally, visit the Jordan Museum, where some of the Dead Sea Scrolls are on display.

Today's the day you'll get the chance to experience the wonder of Petra, a historic city and archeological site famous for its rock-cut architecture and water conduit system. A nickname for Petra is "Rose City," due to the color of the stone out of which it is carved. Known as the capital city of the Nabateans, it's an iconic symbol of Jordan. UNESCO described it as "one of the most precious cultural properties of man's cultural heritage."

You'll walk through the mystic Siq ("the shaft"), a natural geological feature formed from a deep split in the sandstone rocks and serving as a waterway flowing into Wadi Musa. Then you'll reach the famous Treasury (also known as Al-Khazneh). Opposite the treasury is a viewpoint you can climb for incredible views from above. Then, you can visit the Street of Facades and walk through the Roman area, where you can climb up to the High Place of Sacrifice and follow the path to the Garden Temple Complex. If you have the energy, climb the 800 steps up to the Monastery, Petra’s largest temple. The view from the top is worth it!

On the last full day of the trip, you'll continue to Wadi Rum, also known as "The Valley of the Moon" due to its sandstone and granite rock surfaces. Inhabited by human cultures since prehistoric times, it's full of ancient rock paintings and majestic temples. You'll explore the area on a safari in a 4x4 vehicle driven by a local guide. Starting from Rum Village, you'll visit the best places of the Wadi Rum Protected Area, including red sand dunes, canyons, Nabatean inscriptions, bizarre rock formations, and huge rock bridges. Then you'll head back to Amman to enjoy one last night in Jordan before the trip ends.

Depending on the time of your flight, you might squeeze in some last-minute sightseeing in Amman. Then transfer to the airport in Amman in time for your international flight. Safe travels!

Looking for more inspiration for your trip to Egypt? Check out these other 7-day Egypt itineraries, with Nile River cruises, cultural trips, and best-of tours to hit the highlights. 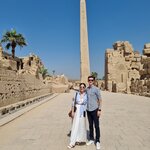 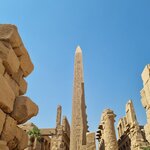 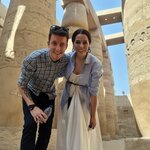 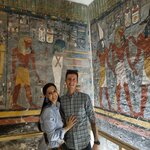 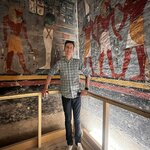 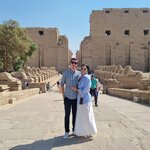 On this quick, eventful journey, experience the best of Cairo. Tour the...

Hit the highlights of Cairo and neighboring Alexandria on this tour....

Venture to the Great Pyramid of Giza, climb to the top of Petra's...

From the Valley of the Kings to the lost city of Petra, the ancient...
Best of Cairo

Enjoy Egypt by land and sea on this lively 10-day tour. Start in Cairo...

Make the Most of Your Time in Egypt

Five days in Egypt offers plenty of choices where most travelers want to...

With a week to spend in Egypt, travelers have several great options. Try...

Ten days is a perfect amount of time to spend in Egypt. With enough time...

Two weeks is a generous amount of time to spend in Egypt. With 14 days,...
Make the Most of Your Time in Egypt

The best weather in Egypt falls between October and March, and the peak...

Cultural highlights, river cruising, and a beach vacation combine on...

There's more to Egypt than the pyramids—this comprehensive 15-day...

Cruise deep into the heart of Egypt on this laid-back, 9-day itinerary....

Cassie K.
Colorado, United States
"The sincerest thank you to Sherif, who created an amazing trip for our family. We traveled to Egypt for 16 days in November 2022 and were amazed at everyth..." read more
Traveled to Egypt as a family in November, 2022

Juan M G.
Florida, United States
"The itinerary planned was met in full - Great service! Even though the planning was based on a baseline itinerary found in KimKim, the local specialist help..." read more
Traveled to Egypt as a family in July, 2022
Create your custom-made trip to Egypt
Get Started