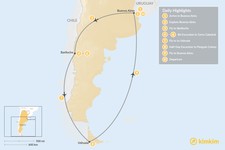 This epic winter holiday covers some of the most beautiful destinations in the country. Arrive in Buenos Aires before jetting off to the southern lakeside retreat of San Carlos de Bariloche to enjoy the best ski conditions in the nation. Next, head to Argentine Patagonia, where you'll sail the same waters as Charles Darwin and walk with Magellanic penguins. Finally, fly back to Buenos Aires to catch a tango show before heading back home.

Plan your trip to Patagonia
Customize your trip with help from a local travel specialist.
Plan Your Trip

After enjoying the exciting city life in Buenos Aires, it's time to head for the southern wilderness. At the scheduled time, a driver will pick you up from your hotel and transfer you to Bueno Aires' local airport, Aeroparque. From here you'll catch a flight to San Carlos de Bariloche, the main city in Argentina's Lake District, which is home to some of the most impressive scenery in the entire country.

San Carlos de Bariloche was founded in 1902 on the shores of Lago Nahuel Huapi, which itself is part of the larger Parque Nacional Nahuel Huapi. If you detect some native influence in that name, you're correct. It comes from the Mapuche indigenous people who once inhabited the area, and it means "jaguar island." The lake straddles the Chilean border, with the city of Bariloche located on the southeast shore. While beautiful in the summertime, Bariloche became globally famous as a prime winter ski destination. So be excited, because you're about to experience the best slopes in the whole of Argentina.

Upon arrival at Bariloche's airport, a driver will meet you and transfer you to your hotel. Even though you may be tired from your flight, try to get out and explore the city. The charming chalet-style buildings and alpine architecture can be seen and enjoyed on a brisk walk around, and the city center abounds with waterfront plazas, chocolate shops, and upscale restaurants.

Some suggested activities in and around Bariloche include:

When dinnertime comes around, be sure to sample the local cuisine. You'll find that it differs considerably than what's typically found in Buenos Aires. Here regional fare like wild boar and lake trout is popular and delicious, as is the fondue (a culinary addition first introduced by the city's Swiss immigrants).

Wake up bright and early and enjoy a hearty breakfast. You're going to need the fuel because you'll be spending the day on the slopes of Argentina's premier ski destination: Cerro Catedral. This 2,338-meter (7,640-foot) mountain boasts 120 kilometers (75 miles) of slopes of varying levels of difficulty. Whether you're a first-timer on a pair of skis (or snowboard) or if you're a seasoned pro, you're sure to find many options to suit your ability. There are even 52 kilometers (32 miles) of cross-country ski routes if you'd like to test your endurance.

But first thing's first. After breakfast, you'll transfer to our office in the city center (as you will do every morning on subsequent ski days) and hop in a vehicle that will whisk you away to the mountain. Upon arrival, the driver will guide you to the office where you can pick up your equipment and passes. Then, from 9 am to 4 pm, you will enjoy the rush of carving your way down Cerro Catedral complimented by all the beautiful scenery of Lago Nahuel Huapi and the surrounding mountains.

The amenities here won't disappoint, either. At the base of the mountain, you'll find many restaurants and a ski school as well as nursery care for young children.

After days enjoying the best skiing Argentina has to offer, it's time to venture even further south, to the end of the world, where more nature and adventure awaits. This morning you'll catch a flight to Ushuaia, the southernmost city in the world. From the airport, a driver will meet you and transfer you to your hotel. You can spend the remainder of the day enjoying the city as you see fit. Try to get out for a walk, as this rugged Patagonian town is best explored on foot.

Located on a bay in the Patagonian region of Tierra del Fuego, the city sits between the jagged peaks of the Martial Mountains and the silver waters of the Beagle Channel. Yes, this is the same waterway where Charles Darwin found himself when he was riding the HMS Beagle almost 200 years ago. Getting out and walking along the waterfront allows you a glimpse of these majestic mountains and the impressive channel.

Some recommended activities in and around town include:

Today you'll embark by boat from the tourist port of Ushuaia out into the Beagle Channel. As you venture out towards the center of the channel you'll be treated to panoramic views of the coast and the skyline of the city, all of which sits under the watchful gaze of Mount Olivia and the Cinco Hermanos Mountains.

You'll sail southwest and pass the Isla de los Lobos, which is little more than a rock but happens to be the permanent habitat of a large group of sea lions. You'll have ample opportunity to view these creatures and take plenty of photos. Then, it's off to Isla de los Pájaros (Bird Island). This is a natural habitat of various species of seabirds including Magellanic cormorants and imperial shags. It's a birder's dream, so keep your binoculars and macro camera lens close.

The furthest you'll venture today is Les Eclaireurs Lighthouse, located on the northernmost of a chain of islands of the same name. Here it is possible to see part of the Monte Cervantes, an ocean liner that sank in 1930. Your guide will also point out many sites both onshore and across the channel, such as Estancia Remolino (a remote ranch), Gable Island, and the naval base at Puerto Williams (located on Navarino Island, Chile).

Eventually, you will reach Martillo Island, where the boat will stop and you can observe the sizeable colonies of Gentoo and Magellanic penguins that call the island home. From here we return to the local port and you can spend the remainder of the day enjoying your hotel's amenities and exploring the town.

A driver will meet you and transfer you to the airport in Ushuaia. You'll then hop a flight back to the capital of Buenos Aires. It may be your last full day in the city, but that doesn't mean you can't indulge in even more culture and unforgettable experiences.

Consider going out for "dinner and a show." No visit to B.A. is complete without taking in a tango performance, and there are plenty of glitzy options to be found in either the city center or Puerto Madero neighborhoods. On this evening out you'll savor the hallmark dishes of Argentina while enjoying a spectacular tango show in the very city where it was invented. As the deft performers move to the music of love, sorrow, and passion, you'll dine on flaky empanadas, succulent steak, and decadent dulce de leche (most tango shows offer vegetarian options).

Enjoy your last hours in the cosmopolitan capital of Buenos Aires. At the scheduled time, your driver will pick you up and transfer you by private car to Ezeiza International Airport, where you'll catch your return flight home.

Argentina, particularly the Patagonia region, offers some of the...