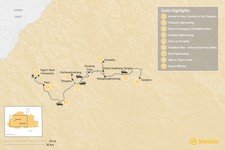 Until 1961, Bhutan could only be entered on horseback. Now, the "Land of the Thunder Dragon" is emerging from the mists of its self-imposed isolation. Bhutan offers high mountains and lush valleys, pristine ecology and an incredible wealth of wildlife—and on this nine-day tour, you'll get a taste of it all. From hiking trails to monasteries, views of the snow-clad Himalaya to rolling valleys and fluttering prayer flags, this comprehensive tour will introduce you to Bhutan's gentle pleasures.

Day 1: Arrival in Paro - Transfer to the Thimphu Valley

Landing in the Paro Valley is like entering another world. Cultivated fields cover most of the valley floor, and hamlets and isolated farms dot the landscape. After arrival, your Bhutanese guide will meet you and accompany you to the capital, Thimphu, located in a large valley and overshadowed by high peaks. It's about an hour's drive from the airport.

Choose to rest, or visit a few points of interest, depending on your time of arrival. Good places to start sightseeing in Thimphu are the Memorial Chorten and Kuensel Phodrang. In the evening, take a walk along Thimphu's high street and get a feel for the culture of this small capital city.

Today, explore Thimphu according to your own interests. The following are options, although you don't need to include them all:

Day 3: Drive from Thimphu to Gangtey

Leaving Thimphu, head into the countryside towards the Gangtey Valley, home of the rare blacked-necked cranes. The drive ascends gradually to the Dochula Pass, which is over 10,300 feet (3139 m.). There are magnificent vistas of the Himalayan range from the pass.

Located near the pass is the Dochula Monastery, a tribute to the service and leadership of the king. It's a unique cluster of 108 chortens, and is an attractive place to stop and take some photos. The descent to Wangduephodrang is vibrant and colorful, with fluttering prayer flags adding to the rich landscape of terraced farms and rivers.

Wangduephodrang is the last town on the highway before you enter central Bhutan. Wangdue Dzong was lost to a devastating fire and is being rebuilt. You can choose to stop at a viewpoint where you can see the ruins of the dzong.

Continue towards the Phobjikha Valley, a wide glacial valley with a central stream meandering through open grassland and thickets of dwarf bamboo. Farmland occupies slopes where potatoes and turnips are grown. The forest beyond the farms is mostly coniferous, with blue pine, birch, maple, and several species of rhododendrons. The local cattle and horses graze on the bamboo, preparing the ground for the cranes that come in winter.

After an early breakfast, begin a day of sightseeing and hiking in the Phobjikha Valley. Here are some of your options today:

Day 5: Gangtey to Punakha via Chimmi Lhakang and Punakha Dzong

Today, head to the Punakha Valley, the old capital of Bhutan. On the way, explore the valley and a couple of attractions. First, Chimmi Lhakang. Traverse the Punakha countryside, walking through paddy fields to Pana Village to see Chimi Lhakhang, built in 1400 to subdue local demons. The temple is a popular pilgrimage spot, and is especially revered by women for its fertility powers. Later, check out Punakha Dzong. This dzong sprawls at the confluence of the Phochu (male) and Mochu (female) rivers. It was built in 1637.

Set out early for a hike to Khamsum Yulley Namgyal Monastery. A 30-minute drive from the Punakha Dzong will bring you to the base of the hill on which this temple is built. From the car park, cross a suspension bridge and walk through rice fields before climbing a moderately inclined trail surrounded by pine trees. From the temple it takes about an hour to hike up to the temple, and half an hour to hike down.

After lunch, continue towards the Paro Valley, a 3-4 hour drive, via the Dochula Pass.

Today is devoted to exploring quaint Paro and its surrounding areas. Your sightseeing itinerary can include:

If you'd rather get active than embark on general sightseeing, today you can choose to hike to Drakharpo Monastery. After a short drive from Paro, hike for about 90 minutes to the monastery, which has a small community of monks living nearby. The main temple room is precariously perched on the edge of a rocky cliff. There are some sacred sites to view, including the body-imprint of Vajrayogini and a stone boot belonging to Guru Rinpoche. The monastery is built on a mountain dotted with underground caves.

After breakfast, drive for about 25 minutes to begin your hike to one of Bhutan’s most revered pilgrimage sites, the Taktshang Lhakhang, popularly known as the Tiger’s Nest Monastery.

The trek offers spectacular views of this sacred monastery, which is perched precariously on a sheer rock face 3000 feet (900 m.) above the valley floor. Legend has it that Guru Rimpoche, father of Bhutan’s stream of Mahayana Buddhism, arrived in the Paro Valley more than a millennium ago on the back of a tigress. He meditated for three months in a cave, which was converted into this monastery.

The hike from the base to the cafeteria will take at least 90 minutes. From there, it’s about an hour’s trek through some stunning landscape to reach the monastery. On the return, stop once more at the cafeteria for lunch.

The trek is easy to moderate, and takes 2-3 hours in total. Ponies are available for the uphill portions at an additional cost.

You'll be transferred to Paro International Airport in good time for your flight. Tashi Delek! We hope you will visit us again.

Perfect for nature-lovers, this nine-day excursion into western Bhutan...

Make the Most of Your Time in Bhutan

With a week to spend in Bhutan, many travelers choose a highlights tour...

With ten days to spend in Bhutan, your options are plentiful. Explore...

There's no place like Bhutan. Discover the kingdom's most spectacular...

Get an inside look at the fascinating culture of Bhutan on this two-week...