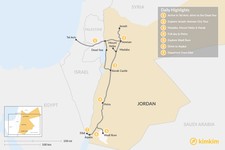 Discover Jordan's leading cultural and historical attractions on this complete seven-day itinerary, a perfect extension following a tour of Israel. Begin in Tel Aviv and cross the border into Jordan to float in the salty Dead Sea, drive north to explore the Roman ruins of Jerash and Amman before turning south to find Byzantine mosaics in Madaba, Crusader castles in Karak, and ancient Nabataean ruins in Petra. End your stay with a Jeep tour of Wadi Rum followed by some time spent in the Red Sea port of Aqaba.

Welcome to Israel! Upon your arrival, you will meet your driver and transfer directly into Jordan via the Allenby Crossing and onward to your accommodation along the Dead Sea in the south of the country. Relax with a float in the mineral-rich Dead Sea—the lowest point on earth. Swim in the salty waters, hang out by the pool or pamper yourself with a mineral spa treatment specific to the region.

Enjoy a leisurely morning with one more dip in the calm waters of the Dead Sea before making your to northern Jordan to explore Jerash, a sprawling archaeological complex with significant well-preserved Roman ruins (some of the best in the Middle East). Stroll down the north-south Colonnaded Street (or "cardo maximus" as it is known in Latin) to climb the steps of the remarkable Temple of Artemis, the highlight of Jerash, before you take in the excellent acoustics of the South Theater with a performance of traditional Jordanian bagpipers.

Next, drive to Amman to check into your hotel and to ready yourself for a tour of the capital where you will explore the Amman Citadel (Jabal al Qal'a) and the 2nd-century Roman Theater, two of the most famous archaeological sites in the city. Next, stroll amid colorful wares and aromatic spices in the old souks (markets), stopping as the mood strikes to snack on local delicacies and pick up a souvenir or two.

After breakfast at your hotel, you'll drive south to the market town of Madaba to check out its intricate Byzantine and Umayyad mosaics, including the spectacular Madaba Map, the oldest preserved mosaic map of the Holy Land. From here, you'll continue your journey to Mount Nebo. According to the Old Testament, this is the lofty peak where Moses took in the view of the Promised Land. Follow in his footsteps and look out at the Dead Sea and beyond, before eventually making your way to the Memorial Church of Moses, a modern structure that now houses excavated relics from the region.

Carry on south along the King's Highway to stop in Karak to visit the impressive Crusader castle of the same name. Exploring the fortress-like structure provides an opportunity to experience the vaulted halls and passageways typical of the era, a remarkable insight into the architectural and military prowess of the Crusaders. When you're ready, continue to your hotel in Wadi Musa, a small village just outside of the "Lost City" of Petra.

Plan your trip to Jordan
Chat with a local specialist who can help organize your trip.
Get Started

Dubbed the "Lost City" as it is relatively recently re-discovered, you'll spend the day experiencing impressive sandstone carvings of this ancient Nabataean world. Walk through the Siq, the three-quarter-mile narrow gorge (1.2 km) that opens up to the magnificent Treasury, the entrance guarding the old city. Then explore the Street of Facades, a row of monumental Nabataean tombs, as you work your way through the archaeological site discovering the amphitheater and caves.

Break for lunch, before climbing your way up the 800 steps to the Monastery, Petra's largest and lesser visited monument. For a stunning view overlooking the Treasury and jagged mountains beyond, hike your way up the steep stone-carved staircase to the top of Jabal al-Khubtha. After a full day, you'll return to your nearby hotel in Wadi Musa to rest up and cool down before venturing out again for a unique Petra by Night candlelit tour of the Siq and Treasury (note: tours run at select times on Monday, Wednesday, and Thursday evenings only).

Leave the Lost City behind and head into the red sand desert of Wadi Rum for a full day Jeep excursion, stopping to climb over red dunes, through rock bridges, and over rocky canyons to discover millennia-old rock inscriptions and petroglyphs. You'll even visit the ruins of a building erected on an old Nabataean cistern believed to be where Lawrence of Arabia hid out during the Arab Revolt (1917-1918). Meanwhile, enjoy sweeping views of the mountains and gorges in the background.

When it's time, you'll make your way to your camp and spend the rest of the day soaking in Bedouin hospitality. Sip on sweet tea and taste authentic Bedouin cooking as you relax under a desert night sky of endless stars.

Wake up refreshed in the great outdoors, taking in the panoramic desert views from your campsite as you eat your breakfast. Pack up your things and continue your venture south to Aqaba, Jordan's only coastal city and access point to the Red Sea. You'll have the rest of the day to explore as you like. Relax on a beach and go swimming to cool off, or head to Tala Bay to enjoy one of the private beaches available.

The more adventurous might enjoy snorkeling, or scuba diving to check out the marine wildlife as well as explore old shipwrecks. If getting wet isn't for you, sign up for a walking tour of downtown Aqaba and do a little gift and souvenir shopping at the same time.

After breakfast, you'll say farewell to Jordan and make your way to the Wadi Araba border to cross into Israel and on to Eilat. Depending on your departure details, you may wish to spend more time in Aqaba or explore Eilat before catching your flight to Tel Aviv for your onward journey.

Hike the Jordan Trail from Dana to Petra - 7 Days

Experience Bedouin hospitality and rural life as you trek a segment of...

This seven-day itinerary includes the highlights of Jordan and Egypt in...

Experience a week of Jordanian hospitality, ancient and natural wonders,...

Enjoy one week exploring Jordan's cherished landmarks as you take in the...
Jordan 7-Day Tours & Itineraries

For a tourist-free experience in Petra, button-up and visit in January....

As with January, Petra in February is still in the midst of its cold,...

Spring is in the air, with plenty of warming sunshine. Temperatures are...

By April spring has arrived and with it, high season as visitors flock...
Best of Petra

From the Old City of Amman to Petra's sprawling ruins, experience a...
Jordan Tours & Itineraries

Make the Most of Your Time in Jordan

Five days makes a quick trip to Jordan, but it's enough time to hop...

Seven days is enough time to experience some of the best Jordan has to...

In 10 days, you'll have enough time to see many of Jordan's highlights,...

With 14 days to explore Jordan, you'll have plenty of time to see the...
Make the Most of Your Time in Jordan

Jordan is a year-round destination, but there are seasonal weather...

Top 10 Must-Do Activities While in Jordan

Planning a trip to Jordan? Here's a list of the top ten activities to...

What to Bring to Jordan: Your Ultimate Packing List

There are many variables to consider when packing your bags for Jordan:...

While most people visiting Jordan are familiar with Petra, there is much...
Jordan Travel Essentials

What to Eat in Jordan (and Where to Eat It)

There is perhaps no better way to get "off the beaten path" in Jordan...

Hospitality and family are key components of Jordanian culture—so it...
Jordan Travel Advice

One of Jordan's busiest and most powerful outposts in ancient times,...

Kimkim has selected the best Jordan travel agents so you'll have a...

Cycle through some of Jordan's most spectacular desert landscapes on...

Take a journey through Jordan's Islamic history on this spiritual 8-day...

Get off the beaten path and into some of Jordan's most spectacular...

This comprehensive two-week itinerary takes you on an unforgettable...

How to Get from Amman to The Dead Sea

The Dead Sea coastline stretches for about 31 miles (50 km), but from...
Getting Around Jordan

Melinda F.
Florida, United States
"Where do I even begin? My travel advisor was very helpful and patient with all my questions and helped me organize my trip. Once we landed we were greeted by..." read more
Traveled to Jordan as a couple in May, 2022

Susan W.
New York, United States
"This was my first time using KimKim or any travel booking service; we are generally very independent travelers and I usually book everything myself. But with..." read more
Traveled to Jordan as a couple in June, 2022