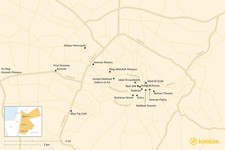 Jordan may be best known for its remnants of ancient civilization, but the vibrant scene you'll find in the modern-day capital city of Amman should not be overlooked. With incredible food, a legitimate arts scene, and a number of time-worn ruins of its own, Amman provides a perfect snapshot of Jordanian culture and hospitality.

When imagining a trip to Jordan, travelers often picture the expanse of Petra or the buoyant waters of the Dead Sea. But it's important not to overlook the capital city, which has a plenty of its own gems to offer. One of the best-kept secrets in the Middle East, you'll find that Amman has a perfect mix of cultural tradition and modern appeal.  Inhabited since prehistoric times and named the capital of modern Jordan in 1921, Amman was actually not much more than a village until the middle of the 20th century. Thanks to a healthy influx of immigrants and investors since then, it's now a bustling metropolis with a population of 4 million - and in an effort to keep up with other cosmopolitan centers in the Middle East, Amman has had a booming surge of growth in the past few years, with no sign of stopping.

Amman is divided into prosperous, newly developed West Amman, and East Amman where you'll find working class neighborhoods and more traditional Jordanian culture. Right in the middle is downtown: the "Old City." Situated in Jordan's mountainous northern region, Amman has seven distinct hills (or "Jabals") of its own which serve as reference points for its various districts. Jabal Amman is comprised of a number of West Amman neighborhoods, Jabal Al Q'ala is home to the few remaining original ruins, and Jabal Al Lweibdeh is the center of the burgeoning arts scene. Another set of landmarks are the large, ubiquitous traffic circles along Zahran Street that are numerically ordered; Rainbow Street, for example, is near Circle 1.

Citadel Hill: Also known as Jabal Al Q'ala, this hill was the center of an ancient city and is now the site of some of the only remaining ruins from that time in Amman.

Roman Theater: This impressively large amphitheater was built by the Romans, and has the capacity for 6,000 people.

King Abdullah Mosque: The only mosque in Amman that allows non-Muslim visitors, especially notable for its beautiful and prominent blue dome.

Rainbow Street: Named after one of the many classic cinema houses in the neighborhood, Rainbow Street is a hip stretch of town popular with expats and young people. Head here for boutiques, cool bars, fun performances, and modern coffee shops.

For a major city, Amman is small enough to be manageable and easy to navigate. The best way to see the Old City is on foot, so be sure to opt for a walking tour, starting with two of the famous attractions: the Citadel, an ancient hilltop settlement, and the equally time-worn Roman Theater. Weave through back streets, colorful food markets, and tiny shops full of handmade crafts. Eat authentic Jordanian cuisine like mansaf - roasted lamb and yogurt sauce, widely regarded to be the country's national dish. Once you've had your fill, hang out in the hip pubs and shops on Rainbow Street.

If you have another day to spend, follow your curiosity. Marvel at the architecture of two holy buildings: the impressive King Abdullah Mosque, with its photo worthy blue mosaic dome, and the Ottoman-style King Hussein Mosque. Interested in taking a new skill home with you? Book a class at Beit Sitti, or "Grandmother's House," a cooking school located in a beautiful house. Come to master traditional Jordanian dishes from locally lauded chefs, and stay to enjoy the incredible food you prepared with their help. Or take in Amman's art scene at Darat al Funun, the Jordan National Gallery of Art, and the contemporary galleries of Jabal Al Lweibdeh.

AlQasr Metropole is a mid-size boutique hotel in the stylish Shmeisani neighborhood. It has multiple restaurants, including an Italian trattoria, and a number of spacious rooms with balconies overlooking the city. Amman is also a great opportunity to stay in luxury hotel chains for a significantly smaller price tag than in other big cities. The Four Seasons Amman is predictably opulent, or check out the Amman Rotana, a glittering tower known for its architecture and five-star service. For budget travelers, the clean and friendly Amman Pasha is located right across from the Roman Theater.

You can't visit this city without stopping at Hashem for its famous falafel; their menu is full of wallet-friendly, authentic dishes. For dinner, treat yourself to traditional Jordanian fare in a beautiful setting at Sufra - make sure to ask for a table outside on the garden patio of this Rainbow Street restaurant.  Afterward, make a stop for dessert downtown at Habibah Sweets, where you'll find some of the best knafeh in the city. Near Abdoun Circle, you'll find the Blue Fig Café, an eclectic restaurant and bakery with international menu offerings that often hosts art shows and live music.

Amman serves as an excellent base for day trips to many of Jordan's areas of interest. The ancient city of Jerash and the beaches of the Dead Sea are both under an hour's drive away. Bethany, Mount Nebo, and the town of Madaba are also close by and definitely worth a visit.

While you may think of Jordan as a sunny, hot desert, the Northern part of the country, including Amman, gets varied weather throughout the year including the occasional snowfall. In addition, the city itself has its own microclimates due to its hilly geography. Check the weather, pack accordingly, and dress in layers throughout your visit.

Walking around Amman is a great way to experience the city, but make sure to practice safety measures. Traffic isn't always friendly to pedestrians, so pay extra attention to your surroundings. Ask a local expert if you're not sure about the safety of a certain neighborhood, and use taxis if you plan to explore after dark.

Hospitality and family are key components of Jordanian culture—so it...

Amman was built upon hills—so naturally, there are plenty of great...
Best of Amman

One of Jordan's busiest and most powerful outposts in ancient times,...

Make the Most of Your Time in Jordan

Five days makes a quick trip to Jordan, but it's enough time to hop...

Seven days is enough time to experience some of the best Jordan has to...

In 10 days, you'll have enough time to see many of Jordan's highlights,...

With 14 days to explore Jordan, you'll have plenty of time to see the...
Make the Most of Your Time in Jordan

From the Old City of Amman to Petra's sprawling ruins, experience a...
Jordan Tours & Itineraries

Jordan is a year-round destination, but there are seasonal weather...

Top 10 Must-Do Activities While in Jordan

Planning a trip to Jordan? Here's a list of the top ten activities to...

What to Bring to Jordan: Your Ultimate Packing List

There are many variables to consider when packing your bags for Jordan:...

While most people visiting Jordan are familiar with Petra, there is much...
Jordan Travel Essentials

What to Eat in Jordan (and Where to Eat It)

There is perhaps no better way to get "off the beaten path" in Jordan...

Hospitality and family are key components of Jordanian culture—so it...
Jordan Travel Advice

Kimkim has selected the best Jordan travel agents so you'll have a...

Cycle through some of Jordan's most spectacular desert landscapes on...

Take a journey through Jordan's Islamic history on this spiritual 8-day...

Get off the beaten path and into some of Jordan's most spectacular...

This comprehensive two-week itinerary takes you on an unforgettable...

How to Get from Amman to The Dead Sea

The Dead Sea coastline stretches for about 31 miles (50 km), but from...
Getting Around Jordan

Marianne W.
Canada
"An amazing trip! Thank you Raisa for accommodating all my requests from start to finish. (it was a long time in the making) A special shout out to our gui..." read more
Traveled to Jordan as a couple in October, 2022

Nisha S.
New York, United States
"The service from Samir and our Guide Nader was absolutely outstanding!!! Samir was so accommodating and listened to all our requests for hotel changes and it..." read more
Traveled to Jordan as a group in November, 2022