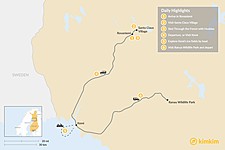 Welcome to Lapland! With four days in Rovaniemi, there's so much you can see and do. Visit Rudolph and the elves at Santa Claus Village, catch the Northern Lights, and sled with Huskies through a silent forest. Add on two more days for an optional excursion to the icy wonderland of Kemi.

Welcome to Lapland! Rovaniemi is the capital of the region. It's also your main base for the next few days. If you've arrived in town early in the day, there's time for an afternoon snowshoe. Then, over dinner, learn a bit more about the city and what it's like to live in the Arctic Circle. After you've finished your meal, head out in search of the magical phenomena that is the Aurora Borealis.

Today, visit Santa Claus Village. Send postcards from Santa's post office, get your photo taken with the most authentic-looking St. Nicholas you've ever seen, and, if you're here in winter, go riding with real-life Rudolphs. As you're at the actual Arctic Circle, you might want to get an official certificate to prove you've crossed this most northern of boundaries, too.

Then, in the evening, if the sky's clear and the season's right, you'll definitely want to go on the hunt for the Northern Lights.

Day 3: Sled Through the Forest with Huskies

In remotest Scandinavia, huskies aren't just man's best friend. Through the centuries, they've provided a vital form of transport. Today, you can go sledding with them! Once you're done and you've finished your evening meal, it's time look up in search of those Northern Lights that flash and dance across the sky.

If you don't have to end your trip just yet, lucky you! You could spend the morning visiting the little museums and stores of Rovaniemi. Then, in the afternoon, head to the seaside town of Kemi near the Swedish border, which is home to Arctic terns, a winter castle made entirely of ice, and lots of history. In fact, this settlement was founded by decree by Russian Emperor Alexander II back in the 19th century.

The seriously mighty Icebreaker Sampo cruises the Gulf of Bothnia right outside Kemi. Go onboard to experience this giant vessel actually breaking through ice. As you sail the waters you'll see ice fields all around, the ever-changing sky, and the birds of the region. There'll also be time to tour the boat, right through to the engine rooms. There's a cozy restaurant onboard where you can grab dinner. And there's a one-hour stop to go swimming — cold water survival suits included.

If you have time, you could also squeeze in a visit to the SnowCastle. As you've probably guessed, it's made from snow and ice — both made of seawater. Open from January until mid-April, it's right in the heart of the city, and yes, there's a restaurant inside. There's a hotel, too, if you'd like to spend the night here.

If you have time before leaving, visit Ranau Wildlife Park to see polar bears and around 50 other Arctic animal species that make their home in the north. Then it's time to head to the airport or train station for your next destination. Perhaps the Finnish capital of Helsinki is calling?

Plan your trip to Finland

Plan your trip to Finland

From dog sledding to snowshoeing, this adventure above the Arctic Circle...

Kimkim has selected the best Finland travel agents so you'll have a...

From dog sledding to snowshoeing, this adventure above the Arctic Circle...

When the Midnight Sun shines, Ranua locals grab their buckets, put on...

When the Midnight Sun shines, Ranua locals grab their buckets, put on...

Carolyn D.
Australia
"We've just spent a wonderful week travelling with Adventure By Design from Rovaniemi (Lapland) to Tromso (Norway). Our trip was all about immersing ourselves..." read more
Traveled to Finland as a couple in July, 2019

Mylan G.
Arizona, United States
"We absolutely loved Norway. It is a beautiful country with wonderful people. Everyone was so friendly and helpful. Our boat tour through the fjords was gor..." read more
Traveled to Finland as a couple in June, 2019

Kevin D.
Canada
"I cannot rave enough about Gareth & Elina. They were so knowledgeable, responsive, and gracious. The agenda they organized for us was exactly what we wante..." read more
Traveled to Finland as a couple in May, 2019
S
Susan M.
New York, United States
"Rikka was a great guide - very knowledgeable and helpful and so full of energy! She made our two snowshoeing trips very easy and enjoyable! Elina and Sonja ..." read more
Traveled to Finland solo in March, 2019

Victoria M.
Kentucky, United States
"Elina and Gareth did a great job of putting together a nice itinerary for us. We really loved the snowmobile excursion and the boys loved riding the mini sno..." read more
Traveled to Finland as a family in December, 2018

Daria P.
Texas, United States
"We had the most amazing trip and a great time with Elina and Gareth. Visits to nature center, raindeer farm and husky farm were interesting and educational. ..." read more
Traveled to Finland as a group in June, 2018
C
Craig R.
New Zealand
"Elina planned a fantastic trip for us. Her and her husband Gareth were very accommodating to us given the late notice we gave them, they even managed to cond..." read more
Traveled to Finland as a family in March, 2018

Rebecca E.
Tennessee, United States
"Elina and Gareth were so much fun and really did everything they could to make sure we had an enjoyable trip. Elina always answered all my questions in a ver..." read more
Traveled to Finland as a couple in February, 2018
Create your custom-made trip to Finland
Get Started