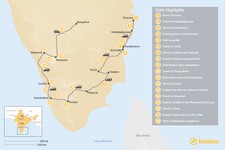 South India is a hot, steaming, colorful mix of untamed nature and mesmerizing culture. This tour will immerse you in some of the more exotic traditions of peninsula India: the art and temples of Tamil Nadu, the flavors and jungles of Kerala, and plenty of chill-out time on the backwaters and in the hills that permeate the region.

Arrive in Chennai, the biggest city in South India. After settling into your hotel, take an easy trip to the San Thome Cathedral and the Kapaleeshwara temple, one of the most beautiful temples in India.

Drive south to Mahabalipuram today. This is a coastal village where you can discover magnificent statues along the beach dating from the 7th and 8th centuries when it was the major seaport of the Pallava Kingdom. This village has been declared a UNESCO World Heritage Site, yet has a generally peaceful atmosphere.

In the morning, head to Pondicherry, one of the finest destinations in South India. It's a rare French enclave in India because although Britain was the main colonial power in India, Pondicherry was a French settlement until 1954. Nowadays, it's a separate Union Territory, although it's surrounded by the large state of Tamil Nadu.

In the afternoon, take a bike ride along the coastline and check out the grand French colonial buildings on one side, and the sweeping sand and sea on the other.

Spend the night in a characterful boutique hotel.

Today you get to try your hand at cooking some of the delicious South Indian food that you've been enjoying the past few days. Start by shopping for fresh local ingredients at the market, then cook up a storm for a fun-filled day.

Guided by local people, today you get a chance to explore the unique and fascinating city of Auroville, located 10 km from Pondicherry. It's an international and universal city built for men and women from all over the world to live in peace and progressive harmony. In 1966, UNESCO declared this project to be unique in the world.

One of the purposes of Auroville is to achieve the realization of human unity and to bring about an inner change in the individual. It also aims to be a model community, where constructive solutions to the difficulties faced by humanity can be found.

Return to Pondicherry and enjoy a free afternoon.

After breakfast, transfer to Trichy by road, a journey that will take you inland to the south-west. The city of Trichy was built around the famous temple Fort Rock, a spectacular monument perched on a huge rock that rises in the middle of the old town.

Day 7: Trichy to Tanjore to Madurai

On the way to Madurai, you will discover the ancient city of Tanjore (also known as Thanjavur), one of India's most important religious centres, built in the 10th century and declared a UNESCO World Heritage. Continue to Madurai, one of the oldest cities in the world, where you will visit the amazing temple of Meenakshi Amman and the palace of Tirumalai.

Drive to Periyar, a small village in the mountains of Kerala. Periyar is surrounded by tea and spice plantations and is a must-visit spot, especially for nature lovers.

Take a boat ride at lake Periyar and tour Kerala’s finest coffee and spice plantations, such as cardamom, cinnamon, and pepper. Visit Connemara tea factory (around 45 minutes from Periyar), and afterward watch a Kalari display, a form of Keralite martial arts.

Day 10: Periyar to mangroves at Kumarakom

Travel to Kumarakom, a mangrove paradise surrounded by green fields and coconut trees. Take a boat ride on Lake Vembanad and along the water channels that are full of flowers.

Taking a houseboat tour of the backwaters of Kerala is a highlight of any India trip. These boats were once used as rice transportation barges, and have now been kitted out comfortably for cruising. Discover local traditions such as toddy tapping and the lifestyle of the people who live by the canals. This is an unmissable cultural immersion experience.

Fort Cochin (part of Kochi city) is a melting pot of cultures, including Portuguese, Jewish, Dutch, Hindu and even Chinese heritage. Here you can see the iconic Chinese fishing nets, which have been used for centuries. Fort Cochin was founded in 1341 when a flood created a safe harbor for the city and turned it into a major commercial port on the Malabar Coast.

Explore Fort Cochin on foot, visiting Jewtown with the Pardesi Synagogue, Catholic Cathedrals, and the beautiful Chinese fishing nets (especially at sun down).

Day 14: Cochin to Wayanad, back to the hills

Drive to Pinangode, the small district headquarters of Wayanad. The site is at the foothills of the Vythiri range, with the majestic Chembra peak to the left and the Banasura/Kuruchermala to the right.

Enjoy two nights in luxury tents at a coffee farm overlooking a tea plantation. The swift-flowing river is below, and an Adivasi (indigenous) community live on its banks. The property is full of diverse tree and bird species. A pair of Malabar Hornbills have now nested on the property — great for bird watchers!

Explore wildlife in the Wayanad Wildlife Sanctuary. Rich in biodiversity, the sanctuary is an integral part of the Nilgiri Biosphere Reserve. It has been established with the specific objective of conserving the biological heritage of the region.

The sanctuary is rich in flora and fauna. The management lays emphasis on scientific conservation, with due consideration for the general lifestyle of the Adivasis and others who live in and around the forest.

Ooty, 'Queen of Hill Stations', is a mix of Indian bustle and Hindu temples, with beautiful gardens. The journey up here is very romantic and scenic.

Day to explore in Ooty, or take a day hike in the Nilgiri Hills to see tea plantations, Adivasi communities, and stunning views of the green landscape.

As the largest hub in the area, transfer to Bangalore to take a flight elsewhere in India, fly home, or enjoy a few days in the city. Bangalore is known as the garden city because of its pretty parks and abundant greenery. It's also an affluent IT hub, so the modern comforts of this city attract many visitors.

South India is a hot, steaming, colorful mix of untamed nature and...

This itinerary's focal point is one of the most beautiful multi-day...