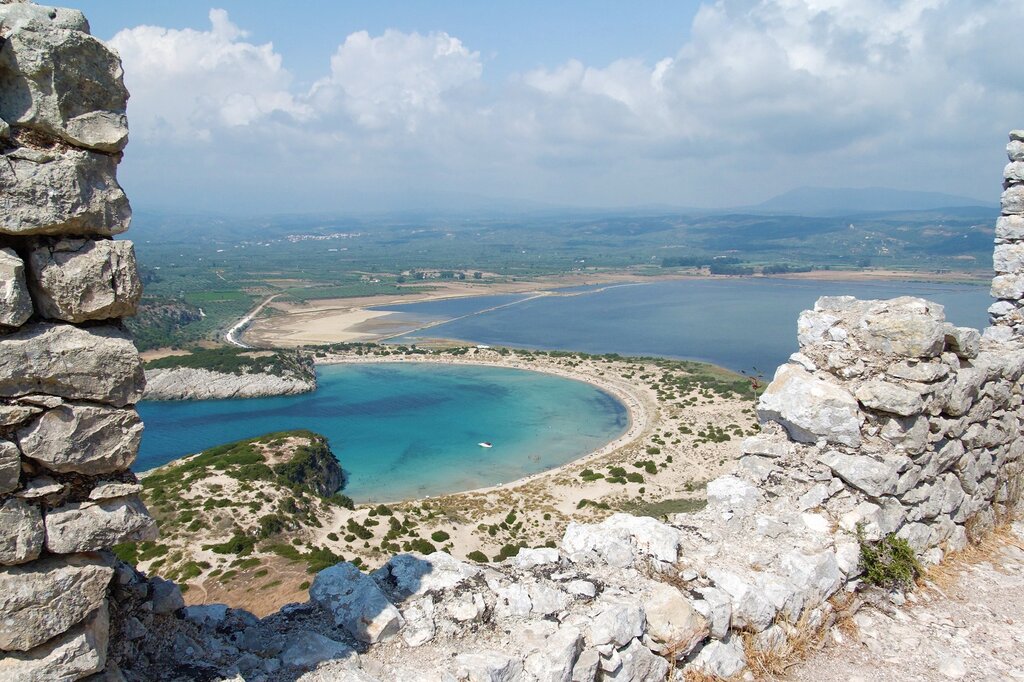 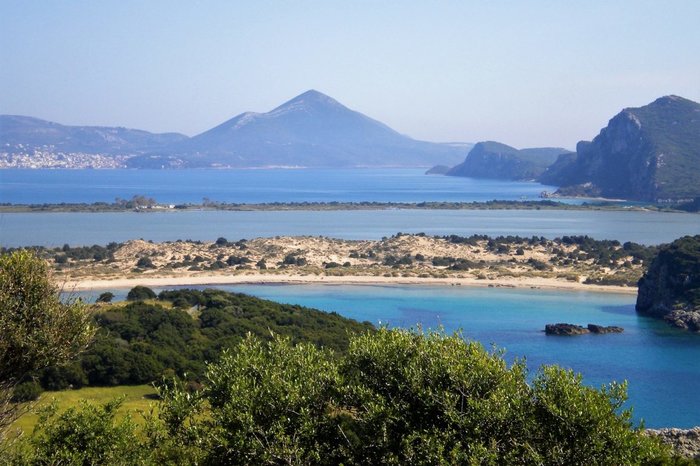 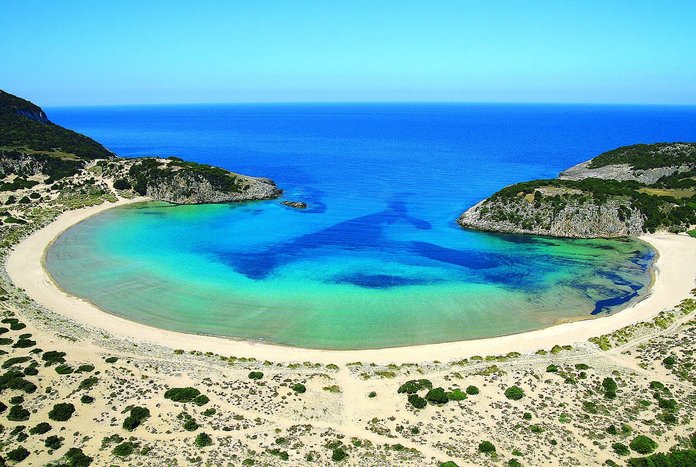 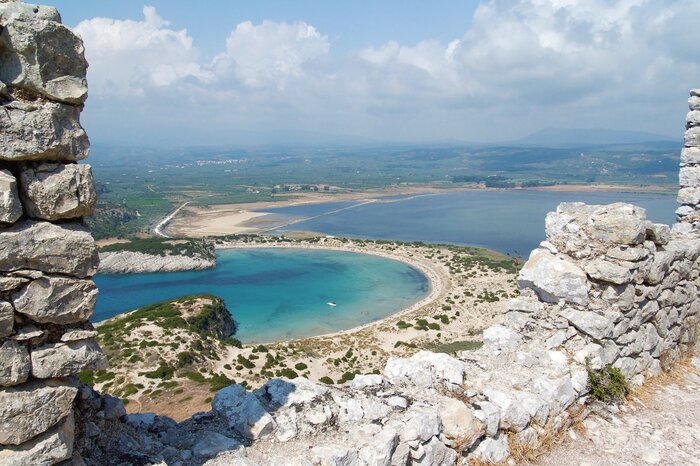 The moment you see Voidokilia Beach, you may recognize it, as the famous crescent-shaped shoreline has graced many magazine covers as one of the best places to visit in Greece. Its name signifies the belly of the ox, the same as Voufrada, as referred to by Homer in his epic poems, "The Iliad" and "The Odyssey." Its shores are sandy and shallow, offering the signature turquoise-hued water known to Greece.

The area surrounding Voidokilia Beach is a Natura 2000 protected zone, so keep in mind that you won't find any facilities. Bring what you'll need for a day soaking up the sun, including water, umbrellas, sunscreen, and hats!

After a morning relaxing on the beach and swimming in the sea, make your way to the south hill of Voidokilia for an easy hiking excursion. The path ascends the dunes, continues through the amaranths to the Cave of Nestor, and then stretches to the top of the old medieval fortress, Paleokastro. The entire trek takes about 30 minutes. The 13th-century castle once controlled the Frankish area versus the Venetian land of Methoni.

After visiting the castle, you can hike back down to Voidokilia. But if you're up for a longer excursion, the path also descends to another beach called Stomio (or Bouka, according to the locals), on the other side of the hill. Here you'll find the closest point between the Gulf of Navarino coast and the island of Sfaktiria. At Stomio, you can enjoy the sea, even on a windy day, and swim to Sfaktiria! To return, use the path adjacent to the Gialova Lagoon, which is flat, thus far easier than climbing back to Paleokastro again.

Another alternative is the Tomb of Thrasymedes, the son of Nestor, which is accessible via the path on the north hill. Although currently abandoned and run-down, the tomb was mentioned in the works of Pausanias, discovered by the British historian G.B. Grundy, and excavated in the 1950s by archeologist Spiros Marinatos.

After visiting the tomb, you can continue through bushes and weeds to reach the hidden paradise of Small Voidokilia Beach or Glossa, a tiny stretch of shoreline with the same shape as Voidokilia. At the edge of this cape, known as Koryfasio, you may see remains of ancient walls, which support speculations that this area is the port of Ancient Pylos' location!

Read more about unique and interesting historical experiences and the best beaches in Greece.

Your school-aged children can learn about Greek culture in a sun-filled and interactive style on this itinerary. You'll start off by creating comic books or learning some Greek language skills in Athens. Then head to the Mani Peninsula, full of beautiful beaches and stone villages to explore. Finish your trip in the famous olive region of Kalamata, with cooking lessons, archery, scenic hikes, and more.

Discover the warm, crystal-clear waters of western Messenia, starting in...

Discover the flavors of Greece with a one-of-a-kind food tour in the...

Explore Mani Peninsula's natural beauty by kayak, gliding through its...

Ancient Olympia Tour in the Peloponnese

This tour takes you through the archeological ruins of Ancient Olympia,...

Like many other countries in the Mediterranean, Greece has been...
Show more Greece experiences

School-aged children can get a taste of both Classical and modern Greece...
Best of Kalamata

Kimkim has selected the best Greece travel agents so you'll have a...
Create your custom-made trip to Greece
Get Started
To improve your online experience, we use cookies for enhanced functionality and analytics.
We recommend allowing these functions for the best experience possible.