Enjoy a leisurely exploration of Essaouira, a small city on the Atlantic coast known for its historic Medina (old town) and well-designed layout. The city has a long history of different influences, including indigenous Berbers, Phoenicians, and Romans. The Portuguese occupied the city from the 15th century and built its fortress and ramparts in 1506 CE.

As we know it today, the city wasn't built until the mid-1700s, with much of its charm influenced by Portugal and Andalusia. Known for its blue and white buildings, Essaouira hosts an art-centric population, attracting a large bohemian crowd for the Gnaoua and World Music Festival every summer. You'll also find windsurfing and kitesurfing enthusiasts, thanks to the powerful winds that constantly blow in the bay.

By its location on this stretch of the Atlantic coast, where trade winds prevail almost year-round, the town enjoys a particularly pleasant climate. It is a prime location for surfing but has managed to escape mass tourism. A mecca for hippies during the 1970s, it's still an artists’ town and is very fashionable with independent travelers. In the 7th century BCE, the Phoenicians founded a base on the site where Essaouira now stands, and in the 1st century BCE, Juba II made it a center of the manufacture of purple dye.

The Portuguese established a trading and military bridgehead here in the 15th century and named it Mogador. However, the town itself was not built until around 1760 by the Alaouite Sultan Sidi Mohammed ben Abdallah (Mohammed III), who established a naval base. In European-style, fortresses, the town, the harbor, and the fortifications were designed and built by Théodore Cornut, a renowned French architect who had worked for Louis XV. The combination of Moroccan and European styles pleased the sultan, who renamed the town Essaouira, meaning "well designed."

By 1912 the French had established their protectorate, changed the town’s name back to Mogador, and diverted trade to Casablanca, Tangier, and Agadir. It was only with independence in 1956 that it became Essaouira again. Since Orson Welles filmed Othello here and hippies chose Essaouira as a hang-out, the town has seen a steady flow of visitors—everyone from artists, surfers, and writers to European tourists escaping the Marrakech crowds.

As you twist through the Medina's wide and bright streets, which cover 75 acres (30 hectares), enjoy the city's charm. Essaouira was built on a rocky peninsula jutting out into the ocean with several islets scattered along its coast, its layout unusual because it was planned before development. The French architect Cornut, who, between 1760 and 1764, built the Scala de la Ville and the Scala du Port, endowed the town with fortifications and outer and inner walls. Enjoy the souks, street vendors, leafy plazas, and whitewashed houses with ornate wooden doors.

Dramatic, wave-lashed ramparts surrounded the medina and were famously used in the opening scene of Orson Welles’ 1951 film Othello. Part of its old walls still stands today, making for quite the dramatic and picturesque scenery. As you stroll, stop into various traditional shops, where you'll find perfect souvenirs. In particular, stop at the Spice Souk, the place to go for herbal medicine, Berber lipstick, exotic spices, and Ghassoul (clay used in face masks). You can also buy argan-oil products here, as well as Amlou (a mix of honey, almond and argan oil). Chat with local artisans as you peruse ceramics, spices, art, leather goods, shoes, jewelry, rugs, wood crafts, and more.

Then explore the city's Jewish history, stopping at Rabbi Haim Pinto, a well-preserved synagogue and a historical and religious site dating back to the early 18th century. Wander through the Mellah (Jewish District and a UNESCO World Heritage Site), listen to stories of Essaouira's Jewish communities, and admire the profound door paintings and carved emblems. The other two preserved synagogues include Slat Attia and Slat Lkahal Mogador.

The Porte de la Marine is crowned by a classical triangular pediment dominated by two imposing towers flanked by four turrets. Battlements surmount the rectangular Scala du Port. Essaouira's large working port is noisy, pungent, and hugely atmospheric. Along with the flurry of boats arriving and departing, you can watch net repairs, the day’s catch arriving, and the making of traditional wooden boats. The boatbuilders supply fishing vessels for the entire Moroccan coast and even as far away as France, as the design is particularly seaworthy. It’s also worth visiting the fish auction, which takes place in the market hall just outside the port gates and sampling the grilled sardines.

From the 18th century, nearly half of all Atlantic sea traffic passed through Essaouira. It became known as the Port of Timbuctu, the destination of caravans from sub-Saharan Africa bringing goods for export to Europe. Once one of Morocco’s largest sardine ports, Essaouira now provides a living for no more than 500 to 600 families. But it still has its traditional shipyard, where vessels are made from wood.

Before heading back into the city, stroll the long and sandy Essaouira Beach and catch glimpses of surfers in the wind. 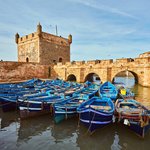 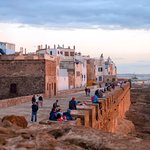 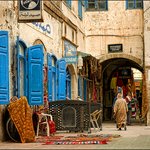 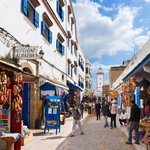 This 12-day tour of Morocco is filled with adventure, history, and culture. Begin in Fes, and learn about crafts and artisans. Then, trek into the Sahara Desert by camel, and experience the sand dunes and camping under the stars. Next is a trip to Ouarzazate to visit movie sets in "Moroccan Hollywood," followed by Marrakech, where the Jemaa el Fna is bursting with culture. End the trip with some coastal exploration in the town of Essaouira before departing from Casablanca. 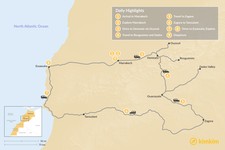 This relaxed itinerary takes you on an off-the-beaten-path exploration of Morocco's culture and landscapes. Explore the bustle and history of Marrakech, then travel through the Atlas Mountains. You'll go on an off-road adventure and will discover breathtaking scenery at Morocco's tallest waterfalls. Climb aboard a camel to trek out into the desert, where you'll camp for the night. Then discover Taroudant, a fortified town with great shopping and souks that are easier to navigate than those in bigger cities. You'll end your trip in Essaouira, a gorgeous seaside escape where you can relax and tuck into fresh local seafood.

On this 13-day trip plan, explore all aspects of Morocco–the coastal city of Essaouria, the imperial city of Few, and the Merzouga area of the Sahara Desert. Beginning and ending in Marrakech, stroll the bustling square of Jemma El Fna, then visit Hassan Mosque II in Casablanca, with one of the tallest towers in the world. Hike in the scenic Rif Mountains and get lost in the blue-hued city of Chefchaouen. Enjoy delicious Moroccan cuisine and culture along the way.

Explore the world of Moroccan wine with a wine-tasting tour just outside...

Horseback Riding on the Beach in Essaouira

Embrace the tranquility of Essaouira with a serene horseback riding...

Join the locals of Essaouira and learn one of the city's most popular...

Embrace the buzzy beach scenes of Essaouira with a Quad/ATV adventure on...

Discover Morocco's incredible and flavorful cuisine with a cooking class...

Essaouira has been here almost as long as the sea that laps its coast....

Morocco is an ideal destination for active travelers and adventure...

Moroccan gastronomy is known worldwide as one of the most delicious and...
Best of Essaouira