Not many visitors opt to visit the seaside resort town of Agadir. An earthquake in the 1960s destroyed the city's historic elements, so Agadir lacks the typical Moroccan charms, like an interesting medina with souks and quintessential architecture. However, the city is the country's best beach town, offering a long stretch of sandy coastline with hotels, restaurants, international shopping, golf courses, and other accommodations.

Agadir was founded in the 15th century by Portuguese merchants developing trade links with Saharan caravans. From the mid-16th century, as the Saadian empire expanded, the port became prosperous from exporting local sugar, cotton, and other Saharan products. But this prosperity ended in the 1760s when the Alawite Sultan Sidi Mohammed ben Abdallah diverted the trade to Essaouira.

Agadir was completely rebuilt after the terrible earthquake that destroyed the city in the 1960s. So although it has none of the charms of traditional Moroccan towns, its wide-open spaces and modernity appeal to many travelers. As a result, Agadir is now the country’s premier destination for sun, sand, and pubs. The city's beachfront promenade is its highlight, where Moroccan street life mingles with a shiny white marina, a sandy beach, clean water, and 300 sunny days a year.

Although nothing like what you can find in Fes, Marrakech, or other Moroccan cities, you can still spend a little time exploring the medina and its souks. First, stop at the famous Souk Al Had, where you can enjoy shopping at this daily bazaar selling souvenirs, household goods, and the produce of the fertile Souss plains. Then continue strolling through the Polizzi Medina. This medina was created by Coco Polizzi, an Italian architect who used traditional Moroccan building methods. Stroll through its center and enjoy beautiful houses, restaurants, and craft workshops.

Leave the old behind and explore the new in Nouveau Talborjt, the city's modern core. The quartier was built south of the old city as a result of the earthquake. Head over to the old kasbah, Agadir Oufella. Built by Mohammed Ech-Cheikh in 1540 to keep the Portuguese fortress under surveillance, the Kasbah was restored in 1752 by Moulay Abdallah. It accommodated a garrison of renegade Christians and Turkish mercenaries. At an altitude of 775 feet (236 m), the kasbah's restored ramparts and hilltop ruins offer a stunning panoramic view of Agadir.

End your day at the city's marina, Agadir's most modern attraction. This billion-dirham pleasure port sits between the beach and commercial port. As well as a floating gin palace, the complex of faux white kasbahs has holiday apartments, local shops, international stores, cafes, restaurants, and boat trips. 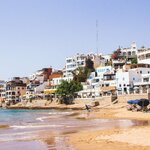 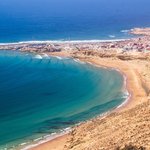 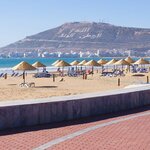 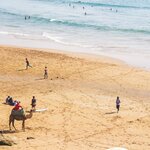 Make your way to the beautiful beaches, dunes, and forests of Souss...

Stay in Cliffside Caves in Agadir

Take advantage of the opportunity to completely unplug while traveling...

Climb the Kasbah Oufella in Agadir

The Kasbah Oufella in Agadir offers some of the best panoramic views of...

Shop at Souk Al Had in Agadir

Souk Al Had is the largest souk in the region and one of the most...